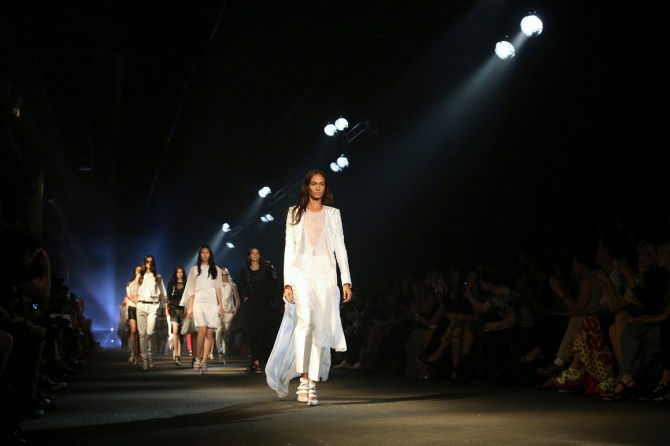 Ah, it’s finally here. New York Fashion Week! That glittering, enticing, and (yes) sometimes stressful week that marks the best time of the year for anyone remotely involved in the fashion industry.

As the week revs into high gear, schedules and plans are still being firmed up, and some shows still haven’t even been announced. Part of the allure of Fashion Week as a whole is not really knowing when and where the biggest shows are happening until the very last minute.

MORE NYFW: How to Follow StyleCaster During Fashion Week

But we happen to know the most up-to-the-minute schedule, and even if you aren’t planning on attending the shows, it’s fun just to be in the know, right? Check out our cheat sheet below!

Friday, September 6
Zimmerman, 9 a.m. at Lincoln Center; the super-chic swimwear label makes its NYFW debut with its first-ever line of streetwear
Peter Som, 10 a.m. at Milk Studios; Som is less talked about but the buzz is increasing: he was just named the fourth designer to collaborate with Kohl’s on their DesigNation line
Jason Wu, 1 p.m., at 82 Mercer Street; the fashion world’s most recent breakthrough darling, Wu is adored amongst celebs and editors alike
Rebecca Minkoff, 3 p.m. at Lincoln Center; the reigning queen of accessories presents a full collection, clothes and all
Cushnie et Ochs, 3 p.m. at Milk Studios; Carly Cushnie and Michelle Ochs are a relatively recent success story, with hordes of celebrity fans of their architectural, minimalistic designs
Rag & Bone, 5 p.m.; the cool downtown brand continues its reign over the the stylish hipsters of the world
Nicole Miller, 6 p.m. at Lincoln Center; the Texas-born, New York-based designer gave us a sneak peek at her forthcoming collection
Helmut Lang, 7 p.m. at 545 West 22nd Street; this super-cool, downtown designer is loved by many a star, including Beyoncé
Suno, 8 p.m.; the reigning king of the quirky print will no doubt present a line true to form

Saturday, September 7
Prabal Gurung, 12 p.m. at 360 West 33rd Street; following his rapid rise to fashion fame, Gurung scores hit after hit and is a red carpet staple
Alexander Wang, 5 p.m. at Pier 94, 711 12th Avenue; arguably the hardest seat to get in town during NYFW, perhaps second only to Marc Jacobs and Oscar de la Renta
Tibi, 6:30 p.m. at Pier 59; the It-brand helmed by Amy Smilovic is ultra-chic and relies mainly on quality fabrics and simple design

Sunday, September 8
Victoria Beckham, 10 a.m. at Café Rouge, 145 West 32nd Street; of course Vicky B would hold her runway show in a café
Derek Lam, 12 p.m. at Sean Kelly Gallery, 475 10th Ave; Lam is known for his super fun and bright prints, which we hope to see on the runway again
DKNY, 1p.m.; the line is celebrating its 25th anniversary this year, so the collection is sure to be major
Tracy Reese, 2 p.m. at Lincoln Center; Michelle Obama’s go-to designer usually sticks to her NYC-inspired, urban girl designs
Zac Posen, 7 p.m.; one of the youngest designers to present at NYFW, Posen’s ultra-feminine, classic silhouettes are a hit amongst the fashion and celebrity crowd alike

Monday, September 9
Mathieu Mirano, 9 a.m. at Lincoln Center; the rising designer sticks to futuristic, avant-garde creations, winning the affection of Lady Gaga for one
The Row, 9 a.m.; Mary Kate and Ashley Olsen fans descend upon the runway
3.1 Phillip Lim, 3 p.m. at Post Office, 360 West 33rd Street; the ultra-pricey, ultra-hup designer presents his namesake line before his lower-priced designs for Target hit stores September 15
Rosie Assoulin, 4 p.m.; the rising designer is much-loved by the Man Repeller, for one, and has been lauded by publications like the New York Times
Dannijo, 5p.m. at Industria, 40 Bethune Street; sisters Danielle and Jodie return with their super-popular jewelry designs

Wednesday, September 11
Michael Kors, 10 a.m. at Lincoln Center; always attended by a super-strong roster of celebrities, an old-school runway show that’s usually full of surprises; this year, there will be a live stream here!
Proenza Schouler, 12 p.m.; the designer duo’s extremely pricey designs are coveted and worn the world over
Reed Krakoff; fresh off his leave from Coach, the designer’s solo upgrade is much-anticipated
The Blonds, 9 p.m., 450 West 15th Street; a good old-fashioned drag show, The Blonds show is always attended by the likes of Paris Hilton; this year’s is inspired by Tweety Bird