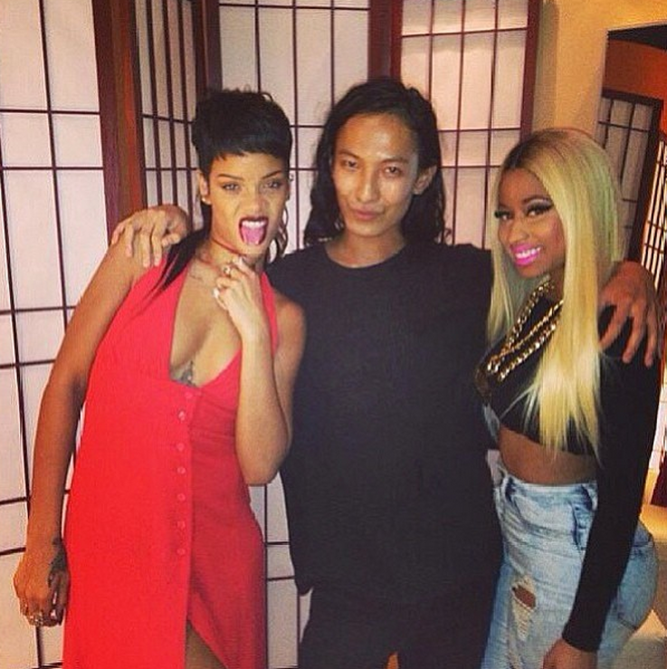 With another exciting, action-packed, and also extremely draining season of New York Fashion Week behind us, it’s time to recap and reflect on one of our favorite aspects of the whole production: The best celebrity gossip! Of course, we’ve loved scoping out the runway trends that we’ll be seeing everywhere come Spring, but there’s also something so fun—and a little bit naughty—about catching up on all the dirt. Read on for the best gossip from New York Fashion Week!

RiRi Gets Too Wasted for Photos
If there’s one thing we can always count on from Rihanna, it’s that she’ll have a grand old time wherever she is, be it backstage at one of her gigs, relaxing on the beach in her home country of Barbados, or raging at a fashion week bash. The latter is exactly what she did at Alexander Wang‘s shindig. According to The Daily News, an eager fan approached the 25-year-old bad girl and asked for a picture. While she’s usually always up for a photo op, she had to reject it on the grounds of drunkenness.  “I am just chilling, I am too f—– up and drunk, no pictures,” she reportedly said. She did, however, make time to snap a few shots with Wang and Nicki Minaj.

More: Celebrities in the Front Row at NYFW

Courtney Disses Katy, Loves “Hillbilly” Miley
Leave it to Courtney Love to always provide top-notch commentary on celebrity culture. At the launch of her close friend and drummer Scott Lipps‘ book PopLipps, during a performance, Love weighed in on everyone’s favorite pop culture phenomenon that is Miley Cyrus‘ performance at the VMAs, and dissed Katy Perry in the process. “I liked Miley, frankly. I’m gonna be honest, Katy Perry bores the f–k out of me. She’s a nice girl, she just really bores me. You know, that hillbilly Miley Cyrus is sort of punk in a weird sex way,” she said.

Kanye Boozes and Schmoozes; Kim Stays at Home With North
Although Kim Kardashian was supposed to turn up for the party celebrating her cover of CR Fashion Book and a screening of the new Carine Roitfeld documentary “Mademoiselle C,” she stayed at home with baby North West. Meanwhile, Kanye West attended the event, and numerous shows throughout the week.

He also proceeded to have way too much Grey Goose at a performance last night, resulting in a rant against designers. Talk about a juxtaposition, as Kardashian was likely changing baby North’s diapers at that exact moment—or at least supervising someone as they did it for her.

Nicki Minaj’s Diva Behavior
The award for the week’s biggest diva just might have to go to Nicki Minaj. The rap star performed at Alexander Wang‘s after party, where she reportedly made the entire staff of the event leave the room for her sound check. Her pre-production jitters caused the party to start incredibly late, which left some guests stranded in the rain.

Additionally, journalist and professional gadabout Derek Blasberg tweeted yesterday, “@NickiMinaj‘s team just made everyone get off an elevator so she could ride alone, which is the douchiest thing I’ve seen at #nyfw so far.” Never one to stay quiet, Minaj quipped back, “@DerekBlasberg sorry about that, I rlly don’t give a shit who rides the elevator with me babe. That was NOT my request. Enjoy your day” Who do you believe?!

MORE: A 7-Year-Old Weighs in on a Look From NYFW

Harper’s Front Row Fabulous
This happened last season too, and we’re happy it’s becoming a trend: Seated front row at her mom Victoria Beckham‘s smashing runway show last Sunday was the adorable Harper Beckham, sitting on daddy David‘s knee. Onlookers smiled at the adorable kid, including Anna Wintour. Now we know how to get Wintour to crack a grin!

Naomi’s Awkward Russian Run-In
At the Interview mag bash on Tuesday night, supermodel Naomi Campbell almost had an awkward run-in with her ex-boyfriend, Russian billionaire Vladimir Doronin, who has since started shacking up with an aspiring model she mentored on “The Face.” According to Page Six, Campbell was totally unbothered by his presence—but Doronin immediately beelined for the door when the stunner arrived. Campbell had an incredibly busy fashion week, and notably closed the Diane von Furstenberg show.Bieber’s Peach Fuzz Takes Opening Ceremony
At the hotly anticipated Opening Ceremony party on Sunday night, Justin Bieber turned up in a white T-shirt, a ton of gold chains, a backwards snapback, and some peach fuzz. His mustache was the star of the night, and fans revealed he was more than friendly, snapping pics and chatting with his crew. He even made time for some amazing photo ops with Humberto Leon and Carol Lim—ensuring that he’ll probably be back next fashion week! No word on whether or not he enjoyed the cronut that was in his gift bag, but we’re sure he did.
Tags:
StyleCaster