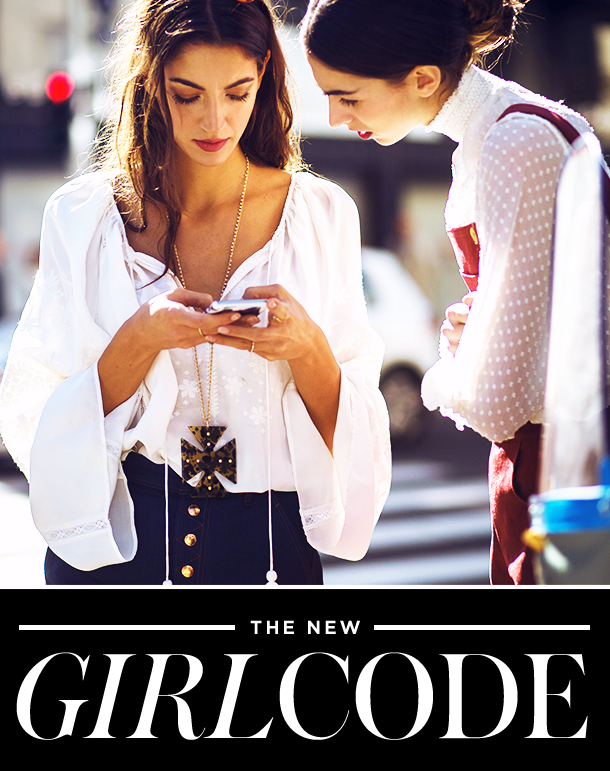 Girl code: It’s that golden rule that girlfriends stay away from a friend’s ex, boyfriend, or other current love interest. No matter how old you are, how long ago a relationship took place, or how deep it was—or is—it’s inherently understood that you should follow these unspoken guidelines if you care to keep your BFFs.

But with the dating scene changing in terms of how we meet and communicate, many are using multiple dating sites and going out with several prospects at once in an effort to find their ideal matches—which presents some interesting challenges to the old-school girl code.

“Social media and online dating have become so popular, it’s more difficult for women to follow the ‘girl code’ because virtual lines can become ambiguous,” says licensed clinical psychologist Dr. Barbara Greenberg. In other words, you may not even realize when you’re crossing a line and jeopardizing your friendships.

Here’s how to deal with friends and dating in cases where modern technology is involved.

Donna Barnes, a relationship coach and author of Giving Up Junk-Food Relationships , thinks dating more than one person at a time is good because it keeps you from being too focused on any one person until you decide to be exclusive. But there’s a caveat: “If you and your friends are using the same dating apps, it’s best to show your friends who you are very interested in,” she says.

After all, if you both live in the same city, you’re likely swiping the same available men. “If you’re both interested in the same man, it’s better to discuss it to see who might have the stronger feelings,” adds Barnes. Just don’t turn the dating game into a competition between you and your friend, as it only adds an element of comparison and disconnect between you.

Careful whom you text with.

When it comes to digital communication, Greenberg advises friends to never engage in virtual conversation with a friend’s ex, current, or potential boyfriend—including texting. “When people are sending messages electronically, they can easily become more sexual and aggressive because they stay anonymous,” she says. Not to mention, you’re going behind your girlfriend’s back. These seemingly innocent texts can get misinterpreted as interest the more you interact.

If that sounds Draconian, you might want to take a step back and evaluate why you’re reaching out in the first place. “Ask yourself what the purpose would be to not include your friend in the dialogue,” says Melanie Ross Mills, relationship expert and author of The Friendship Bond . For example, is the motive to get closer to him without her present or knowing? “Keeping the mind-set of ‘I won’t communicate in such a way that I wouldn’t if she were present’ can help with keeping communication acceptable,” says Mills.

Think before you double tap.

Those ‘likes’ and ‘comments’ you’re making on a friend’s ex- or current boyfriend’s social media posts aren’t so harmless either. This is still a form of interaction and too much in either direction is not acceptable. If your friend’s man is the one doing the contacting, be transparent, advises Greenberg. “Bring up any concerns with your friend,” she says. “It’s better to let her get mad at the boyfriend.”

Pass along your passes.

So what is acceptable under today’s girl code? The experts agree that there is nothing wrong with connecting a friend to a date whom you didn’t seem to jibe with but may be a good fit for your pal.

“Some friends are very generous and like to match their girls up, especially if they’re not interested in a guy,” says psychotherapist Dr. Robi Ludwig. “They figure, why not?” What’s good about this is that you already got to do some of the vetting. And, hey, we want our friends to approve of who we date. “Just make sure that your date is not overly interested in you before setting him up with a friend, because that can be very insulting,” says Barnes.

The experts also note that a friend’s ex doesn’t always have to be off-limits forever, as the old girl code may imply. “Sometimes, time is of the essence,” says Mills. “Once everyone has moved on, it can be easier to accept friending—or romancing—the ex. But not always.” When in doubt, ask your friend for permission IRL.