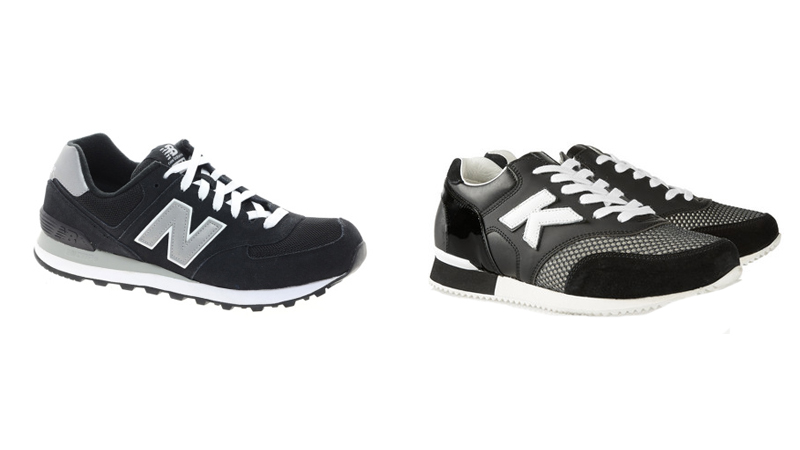 New Balance is suing one of the biggest names in fashion, Karl Lagerfeld, claiming that the longtime Chanel Creative Director ripped off a pair of its iconic sneakers for his own namesake line.

TMZ obtained the lawsuit, and New Balance is claiming that besides the fact that Lagerfeld is using a block capital letter “K” on a pair of his sneakers, they’re otherwise identical to the brand’s beloved kicks. The only major difference, of course, is the price. The New Balance version sells for $112, while the Lagerfeld version will run you a whopping $360.

New Balance makes a point in the lawsuit that it’s been using this exact sneaker design since the 1970s, and notes that even fashion blogs have picked up on how similar the two pairs of shoes are, including one with an article titled, “Wait did Karl Lagerfeld just knock off New Balance sneakers?”

This is hard to argue with—the shoes do look pretty identical, so much so that we have to wonder if Lagerfeld was trying to be a humorist rather than a plagiarist.

Regardless of the intent, it’ll likely be an uphill battle for New Balance to prove trademark infringement, despite the similarity of the shoes.

Fordham School of Law’s Susan Scafidi told us: “A logo is a walk in the park. Trying to establish ownership of a design is more like climbing Mount Everest. A logo, a name, a symbol that you use on every item of clothing or every accessory is registered with the trademark registration office and just as long as it doesn’t look too closely like everyone else, it’s a pretty simple process … Trying to own the actual design of a bag or a dress means having to prove to the trademark office secondary meaning. That means that you have to show that when a consumer looks at that bag—say it’s a Birkin—and automatically say, ‘Oh! That’s a Birkin.'”