Richa Moorjani was in Los Angeles for eight years before she was cast in Never Have I Ever, Netflix’s new coming-of-age comedy by Mindy Kaling and Lang Fisher about a 15-year-old Indian-American girl, named Devi, who’s as uncool as one can expect from the lead of a teen rom com.

Like other cast members on the show, Moorjani auditioned through a casting call that Kaling tweeted to her millions of followers in May 2019. Moorjani sent in a self tape for Kamala, Devi’s beautiful cousin from India who’s engaged to a man she’s never met. A few weeks later, Moorjani was asked to screen test in front of Fisher and Kaling, who she met eight years ago as a guest star on The Mindy Project.  “I don’t think Mindy remembered me right away,” she tells StyleCaster. “I just told her, ‘I don’t know if you remember. But I was on your show eight years ago.’ And then she remembered. So it was a nice little reunion.”

Never Have I Ever, which premiered on April 27, follows Kamala’s new life in Sherman Oaks, California, where she lives with Devi and her mom to attend college, and her complex emotions around her arranged marriage. But unlike other storylines about arranged marriage in American pop culture, Never Have I Ever doesn’t once make Kamala seem different because she’s about to marry a man she hasn’t met. 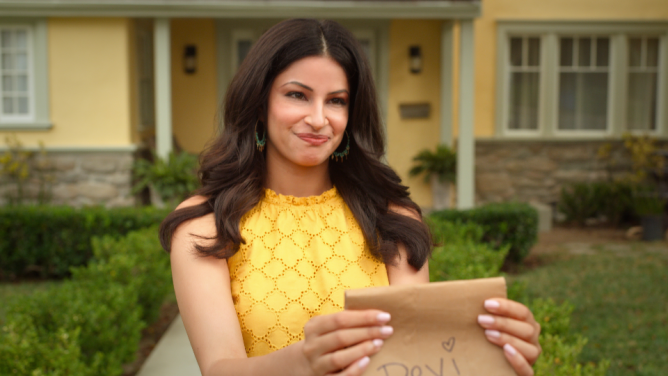 “A lot of South Asians in this country get nervous when there’s an arranged marriage storyline on an American show because it tends to be stereotypical,” Moorjani says. “What I love about this show is that you see a different side to it. Historically speaking, what we’ve seen is this really oppressive, horrible patriarchal system. That’s not always the case. I know a lot of people where their parents have helped them find somebody, and a lot of the time, it ends up working out really well.”

Along with the accurate representation of arranged marriage, Moorjani also believes that Never Have I Ever does justice to the pressure that many South Asian women face from their parents to be married. “Those come from reality. Those are real things that happen to people,” she says. “I, myself, before I got married, felt the pressure to get married. It was something very real and relatable to South Asian women.”

Though she was born in Northern California, Moorjani, who worked with a dialect coach for Kamala’s accent, felt connected to Kamala’s experience as an immigrant due to the way she was raised around Indian culture.  “I didn’t have the experience that Devi had, who felt super disconnected from her culture. We went to India a lot of times growing up and I spent a few years living there by myself in Mumbai to pursue acting,” she says. “The Indian experience is very in me, so even though I grew up here and my experience is different if I would’ve grown up there, Kamala’s experience is still relatable to me.”

As for a possible season 2, Moorjani hasn’t heard yet on if Never Have I Ever has been picked up for another season, but she does have ideas on where she wants Kamala to go. “If there is a season 2, fingers crossed, I would love to see more of Kamala’s backstory,” she says. “I think that would help the audience see why she is the way she is. She’s always struggling between what she wants and trying to make everyone around her happy and to meet everyone’s expectations. I hope she’s able to break out of that fear of disappointing people and do what she wants.”

Never Have I Ever is available to stream on Netflix. 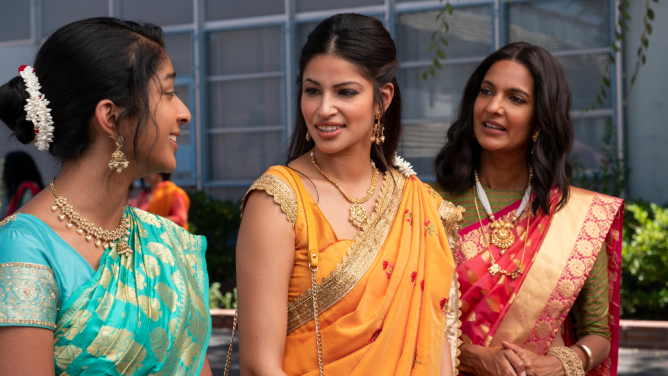 For StyleCaster’s “Screen Time” series, we interviewed Moorjani about what she’s been watching in quarantine and the shows and movies she can quote from heart.

What’s a show or movie you’ve binged in quarantine?

Honestly, I haven’t been bingeing anything. But the show I actually just finished was Little Fires Everywhere. I love that show.

What’s a show or movie that will always put you in a good mood?

Probably Jane the Virgin too. When I was growing up, I was really shielded from watching anything rated R, so I watched a lot of really innocent things. And my guilty pleasure, when my parents weren’t home, was Sex and the City. When I think of guilty pleasure, I think of that.

What was your favorite show or movie as a teen?

I watched so many shows as a kid.The show that comes to mind is Lizzie McGuire.

What’s an underrated show or movie that people should talk about more?

Ramy on Hulu. I feel like not a lot of people have seen it, even though he won a Golden Globe for it. I think it’s one of the greatest shows I’ve ever seen.

What’s a show or movie you can quote every line of?

What’s a show or movie that’ll make you cry every time?

In StyleCaster’s “Screen Time” series, we interview our favorite celebrities about the movies and TV shows that defined their teenage years, that make them cry every. single. time., that they turn on for comfort and what’s getting them through this quarantine.