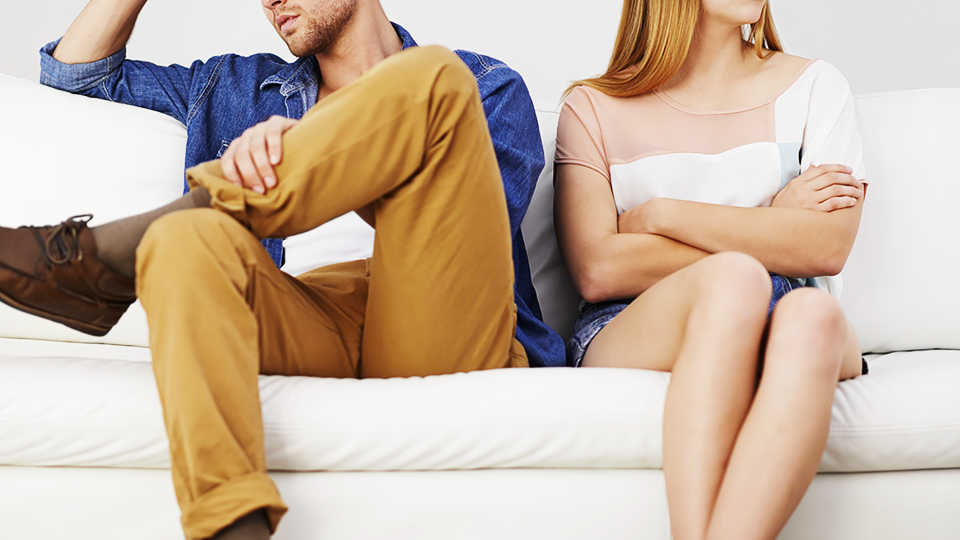 I’m not my best self when I’m angry. I can be petulant and irrational, and my thoughts can’t be trusted. It’s a lot like what happens when I hightail it to the grocery store for “a few things” when I’m starving. I may walk in meaning to get sandwich ingredients and some yogurt, but I’m liable to walk out with enough for a five-course meal, including a couple of gratuitous pints of ice cream. Not a good scene.

Similarly, when I’m really upset, I tend to find myself evaluating every little thing about my relationship. I’ll cast everything in a negative (and untrue) light. But much like avoiding food shopping when I’m hungry, I’ve realized that if I put a moratorium on relationship-evaluation until I cool off, there’s a high chance that most of the thoughts I’m having in the heat of the moment are wrong. Sure enough, the next day, I feel fine about everything again.

My friends have reported comparable findings. Even when all is groovy in a relationship, a little bout of anger can skew feelings so dramatically that it’s almost amusing. Well, it is amusing, but not in the moment, because nothing seems funny when you’re in that kind of mood. So I asked marriage and family therapist Esther Boykin: Why do we tend to evaluate everything negatively when we’re angry? And what is going on in our heads when we’re mad?

Here are five reasons why it’s a really, really bad idea to deal with matters of the heart in the heat of the moment.

We Believe What We Want to Believe

“Our natural inclination is to focus on finding evidence to support whatever it is we believe about a situation,” says Boykin. In a romantic setting, if we’re mad, we believe we’re right and our partner is wrong, and we’ll look for supporting evidence. “When we are angry, we often begin a negative soundtrack in our head, and then we start to look for proof that our partner is in fact a jerk, inconsiderate, selfish, or whatever negative characteristic we feel they are in the moment,” explains Boykin.

This is super dangerous, because it’s so commonly untrue. Assuming that you’re in a healthy, happy, otherwise great relationship, the feelings you have during a fit of anger are not based in reality, but instead attached to the situation at hand.

We Ignore Evidence to the Contrary

So there you are, pissed beyond belief because your boo did something that you perceive to be unacceptable. But what about the other 99 things they did this week that you did like? When the negative soundtrack is playing, our heads are dangerous territory. “We forget how he makes us coffee every morning, or how he spends one weekend a month helping the elderly,” says Boykin. In other words, we ignore all the moments when our S.O. is being kind and generous.

“We use negative bias to justify our anger, and then make decisions from that perspective, which doesn’t give us the full picture necessary to make balanced decisions,” says Boykin. And that, folks, is how we wind up getting ourselves into trouble, thinking or saying things we don’t mean, throwing bags of cookies and potato chips into the cart, if you will.

We Revert to Neanderthal Brain

We don’t just cast a negative light on everything when we’re mad. “When we are angry, our brain is simply less rational,” says Boykin. In such charged moments, “it’s easy to become emotionally flooded. When that happens, our brain relies on the primal region to function—the part of our brain that is responsible for fight or flight response.”

Nothing good can come of regressing to prehistoric brain, and nothing does, says Boykin. When we’re in a state of anger, “the part of the brain responsible for complex thinking basically goes offline,” she says. “But that’s the part we need to make long-term decisions about something as complex and nuanced as the future of a relationship.” It’s all downhill from there. The best thing you can do in such a scenario is to hit pause, and resume rational thought sometime in the future, when your capability to do so returns.

We Have Extreme Thoughts While Angry

“While a fight with your boyfriend should not be a matter of life or death, the hormones released when you get angry can trigger the same part of your brain,” says Boykin. You wind up in fight or flight mode, and your brain goes to that same dark place it went thousands of years ago, when a saber-tooth tiger was nipping at your ankles. “Fight or flight mode is a survival mechanism that lends itself to rigid, black-and-white thinking,” says Boykin.

When you’re angry, it’s all or nothing: Either your partner is a complete jerk, or they are wonderful. Though our brains have evolved considerably since the days of living in caves, we still have primal instincts within, which can be triggered by such hormones as adrenaline that hit the scene when you’re angry. “Imagine you were being chased by a tiger,” says Boykin. “It wouldn’t help your survival to stop and consider the feelings of the tiger and what the best route of escape would be. No, you run fast or hit it hard,” she says. You don’t consider the gray areas.

Anger can often feel like an unraveling: One good pull of a loose yarn, and the whole sweater is in shambles. But just before that deterioration occurs, there is usually a moment of clarity: I’m angry, you think to yourself. I better not express that seemingly vital thing that I think I need to say right now.

Boykin has some pretty practical advice. “The best way to stop yourself from going down the rabbit hole is to practice breathing and self-talk,” suggests Boykin. “Remind yourself that anger clouds your judgment and spins you out of control.” If you have an agreement with yourself in place in advance, you’ll have a better shot at keeping your cool in moments of anger.

And try a mantra, she suggests. “Developing a mantra, like, ‘Stay calm,’ or, ‘Breathe now, talk later,’ can help you get grounded and stop yourself from acting on a feeling that may pass when you calm down,” she says. “The good news is that if you can slow down and give yourself space to feel angry and then let it pass, you will find yourself calm, grounded, and ready to assess your relationship from a much wiser mindset.” And put more kale and root vegetables in your cart.