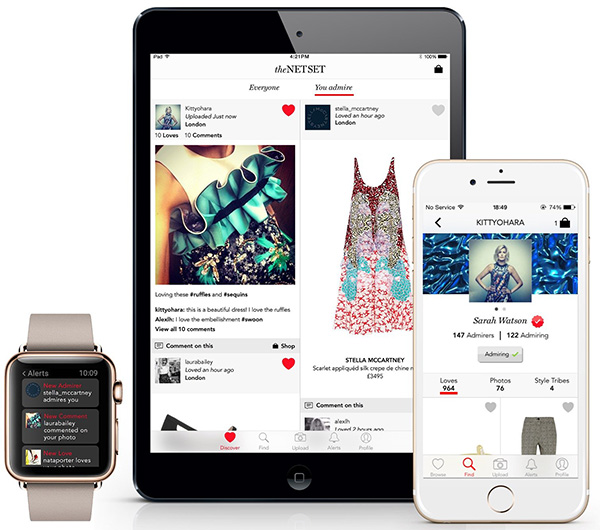 As Conde Nast announces plans to turn Style.com into an e-commerce destination to rival Net-a-Porter, Net-a-Porter too has a plan up its sleeve. Today, the online shopping giant announced that it’s launching a social networking site called The Net Set. Net-a-Porter founder and Natalie Massenet told Vogue.com: “The Net Set is to mobile in 2015 what Net-a-Porter.com was to desktop in 2000.”

Here’s how it’ll work: Users who sign up create a profile, then fill it up with a range of goods from Net-a-Porter that can be picked from a live feed of other profiles including your actual friends, trendsetters, and “style tribes” (which is essentially a breakdown of trends like bohemian and denim that Net-a-Porter has singled out as important). Besides individuals getting their own pages, brands will get them too.

MORE: Why Shopping is Better Than Sex

Eventually, a user’s own live feed in the app will end up looking like a hybrid of Instagram and Pinterest, because— just like with other social media apps—users can amass a group of followers that are  called “admirers.” And in the same vein of other social networking sites, friends are able to comment on items that you’ve put into your feed. Want to know if your BFF approves of a new Diane von Furstenberg dress you’ve been lusting after? Now you’ll know.

Another cool feature? Suggestions based on inspiration photos. So, if you upload a cool street style shot of Alexa Chung walking the streets of London in a trench coat, the app will come back to you with suggestions of things you might like.

MORE: Are You Addicted To Online Shopping?

Net-a-Porter said in a press release: “Today, we are living the golden era of digital exploration where connectivity is instant and the world mingles on the mobile web” and what really sets this app apart from what else is out there is that you can make purchases thorough it directly, without being directed back to the main site.

It’s a smart move, and one that highlights the changing way people are shopping. While a decade ago, it might have been novel to buy a pair Jimmy Choos online, now shoppers are more apt to want to buy something based on a influencer’s recommendation on Instagram or a friend’s post on Pinterest.

But, at the same time, they don’t want to have to make a myriad of clicks through various websites to actually make that purchase. And considering the current lock that Net-a-Porter has on designer shopping online, it’s not a stretch to think that shoppers will turn to this social media and e-commerce hybrid for the ease of purchasing that it’ll offer.

The Net Set launches in the iTunes App Store on May 13 (and will be free to download) and an Android launch is in the works.