After being a part of the “Big Five” supermodels in the 90’s, Naomi Campbell has maintained her place as Head Bitch in Charge for almost three decades now. At 47-years-old, Campbell previously headed a modeling television show, “The Face,” and is now a contributing editor for British Vogue. But her diva personality and long resume hasn’t stopped fans from recently calling her out for a supposed photoshopped image.

Yesterday, Campbell posted a close-up shot of her face on Instagram and captioned it, “#Mood #Bare @narsissist @patti_wilson #Family.” Immediately, there was response that Campbell had photoshopped her nose to look smaller, faded her dark circles, and altered the symmetry of her face. The comments included:

“‘bare’ hahaha this is so photoshopped bye”

“So sad you photoshoped your features :(“

“Whyyyy naomi, the original was perfect”

“It was a good photo before Photoshopped tho. Why”

“Girlfriend. I love you Naomi but if you’re gonna post photoshopped photos, let them be subtle”

MORE: Kim Kardashian Shuts Down Claims That She Photoshopped This Picture

Although the photo is suspiciously perfect, it is Naomi Campbell we’re talking about here. However, most of the comments that mentioned Photoshop also referenced a previous photo, which fans believe is the unaltered, original image. After digging through images of Campbell and NARS Cosmetics, it became clear the posted photo is from the creator of NARS Cosmetics Francois Nars’s self-titled book that came out in 2016. The book has over 400 iconic photos of models and family members, but in particular, a set of photos of famous models in before-and-after makeup. 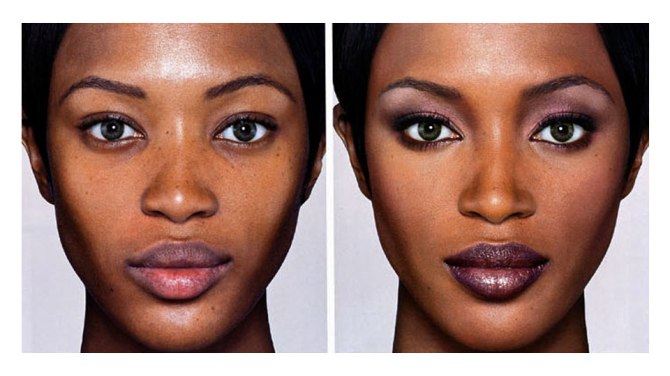 The photo of Campbell above is the “original” people are talking about in the comments. After comparing this one to the one on Instagram, there does seem to be a slight difference in facial features, especially how much thinner her nose is on Instagram.

MORE: Elizabeth Olsen Called Out a Magazine for Drastically Photoshopping Her Face

Even still, if Campbell did or didn’t Photoshop the photo, we can’t be the ones to judge her. Celebrities face a double-edged sword where they’re expected to look perfect,  and then if they don’t, or try to achieve it falsely, they get shamed even harder. So to that, we say: Do you, Naomi. Although you are beautiful without Photoshop, we can’t say we don’t understand.