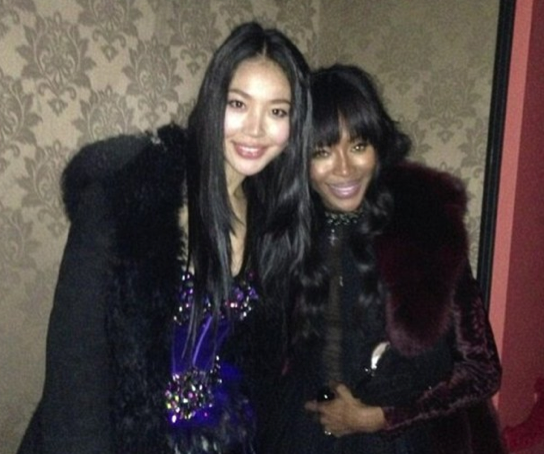 Zilin and Campbell in (much) happier times.
Photo via Twitter

Why, why, WHY would you mess with Naomi Campbell?

That’s the big question when it comes to the ever-evolving Campbell-Luo Zilin–Vladimir Doronin scandal.

To refresh your memory: News broke earlier this week that aspiring model (and former Miss Universe China) Zilin is reportedly dating Campbell’s married Russian billionaire ex-boyfriend Doronin, who split with Campbell last month. Here’s the kicker: The 25-year-old model was closely mentored by Campbell, 42, on Oxygen’s reality show “The Face” and was even part of her team. Ouch!

Listen, we know the heart wants what it wants and all that jazz, but c’mon Luo: Is a billionaire Russian playboy—who apparently was too busy taking up with Campbell to get divorced from his wife, Ekaterina—really worth the carnage that Naomi and her infamous temper are sure to inflict on your career? Especially your career in modeling, an industry that’s basically owned by Naomi Campbell?

So then—in a twist that shocked absolutely nobody—Zilin was promptly fired by her European modeling agency for alleged “unprofessional conduct” and an “unacceptable work ethic.” Boom.

Now, Page Six is reporting that Campbell is hell-bent on destroying the 25-year-old’s career even further. “Naomi has been calling colleagues in the industry to try and stop Luo’s career,” a source told Page Six. “She is trying to take this woman out for no reason other than dating her ex-boyfriend.”

“Luo was fired by her management firm, and her Chinese agent has been asked to drop her. Naomi is trying to wreck her career. She has a lot of power in the modeling world,” the source added.

The source also speculated that it was Campbell who tipped off the paparazzi as to the location of Vlad’s secluded villa in Ibiza, where he first was seen frolicking with Zilin. “Only a few people know the location of that villa. It’s hard to find, and he suspects [Naomi] told the paparazzi.”

It seems another source—this one a reported pal of Campbell—is claiming Naomi’s goal of wrecking Zilin’s career is nothing but nonsense.

“Naomi isn’t trying to destroy Luo’s career, Luo’s agents wanted to get rid of her,” the source said. “And there’s no way Naomi would have known they were in Ibiza.”

Either way, we think Luo is pretty daft for going after a still-married man who made headlines for his messy split with the iconic supermodel, unless she’s cruising for a serious bruising—career, or otherwise.