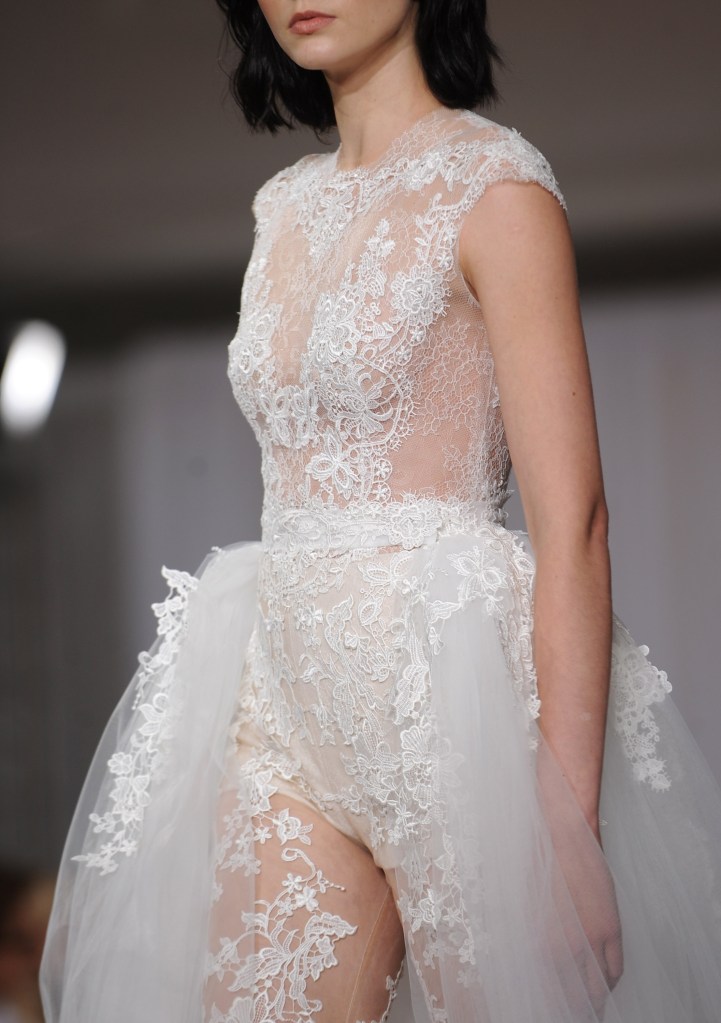 The bride of today is undressed to impress.

Bridal Fashion Week—once a relatively demure showing of beautiful, if predictable, A-line or trumpeted gowns—has grown up in a pretty risqué way, with designers debuting super-revealing dresses more suited to the wedding night than the actual ceremony.

If you’re wondering how we got here, just look back a year or so to the totally see-through Adam Selman gown Rihanna wore to last year’s CFDA awards. It was strung together from 200,000 Swarovski crystals – and not much else. Or the bejeweled Givenchy dress that Beyoncé rocked at this year’s Met Gala. Tiny pieces of fabric. Huge impact.

Yep, like most things in our modern world, Hollywood—where sheer’s the new black—is behind brides’ increasing desire to show serious skin. 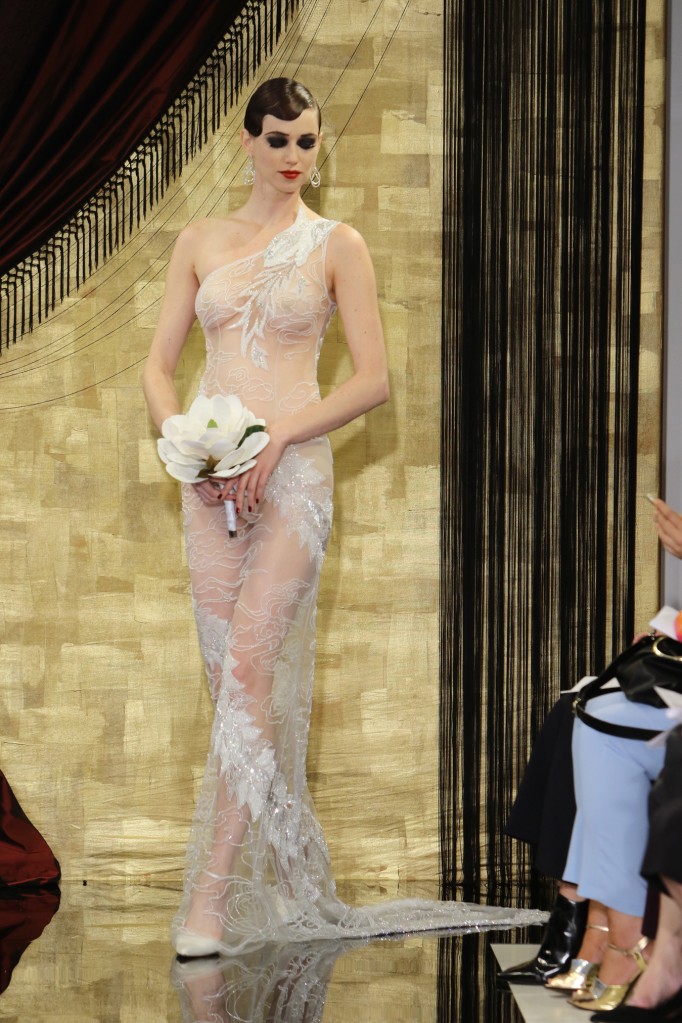 Theia’s ‘Khaleesi’ dress would cause a scandal in Westeros. Photo courtesy of Theia

And it’s not just bridal runways telling us sexy dresses are in—real women are seeking out these looks on their own.

“This is what brides are asking for,” Kleinfeld Fashion Director Terry Hall told us. “I think the days of the bride wearing her mother’s old wedding dress are over.” This means shying away from gowns that are cliché, conservative, or simply too “bridal” when designers offer a way to rock a Beyoncé-like dress on your wedding day. “Brides really want their own red carpet moments,” Hall said.

As a result, the market has responded with gusto, tearing away layer upon layer of tulle and taffeta until only the deconstructed bones of the dress are left. That trend is no more apparent than at popular bridal house Theia, where a model was sent down the runway in little more than sheer tulle with embroidery and crystals (check it out above if you think we’re exaggerating). 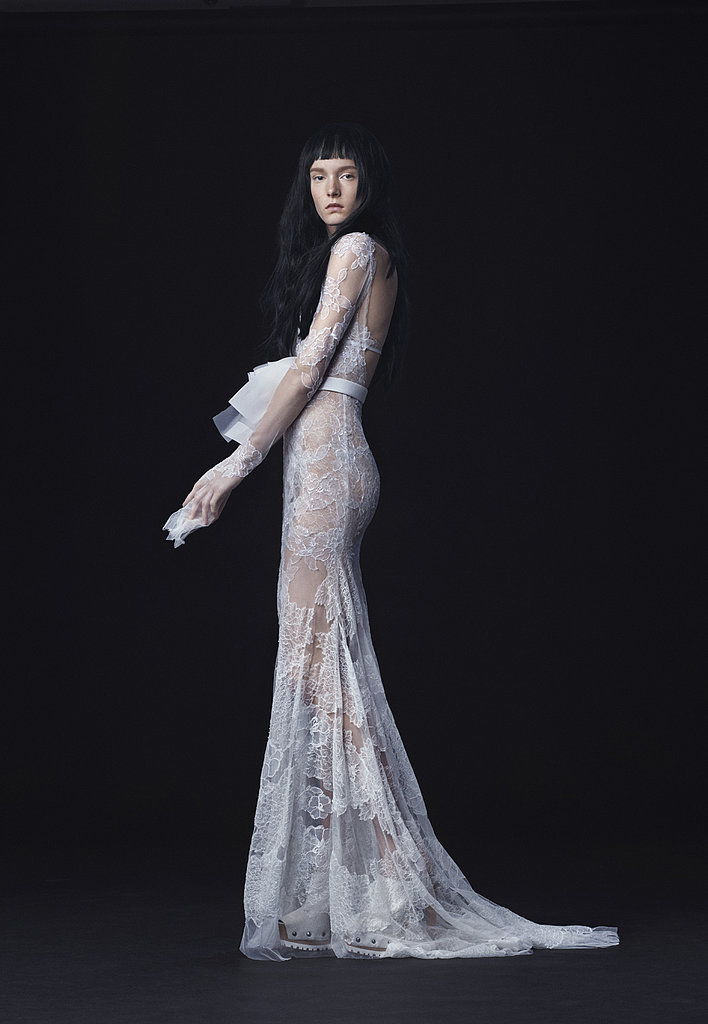 The dress is called the “Khaleesi,” named after fearless (and sexy) “Game of Thrones” character, Daenarys Targaryen. Though, as much as we obsess over the Mother of Dragons (and Emilia Clarke), it’s hard to imagine walking down the aisle in such a … powerful dress anytime soon.

The brand’s creative director, Don O’Neill, tells us it’s not about shock value or sex or a way to get press, it’s about harnessing a woman’s power.

“I wanted to embrace a new bride and allow her to be fearless and empowered by her femininity,” O’Neill told us. His line plucked inspiration from Chinese opium dens of the 1920s—hardly the image of a chaste Victorian-era bride dwarfed by yard after yard of fabric.

These gowns, O’Neill said, were in direct response to the male gaze. “Men have sexualized women to the point where she’s a sex object and taken away the power of her body,” he says. “I wanted to turn that around and allow her to be naked in her own form and be who she is without limits.” 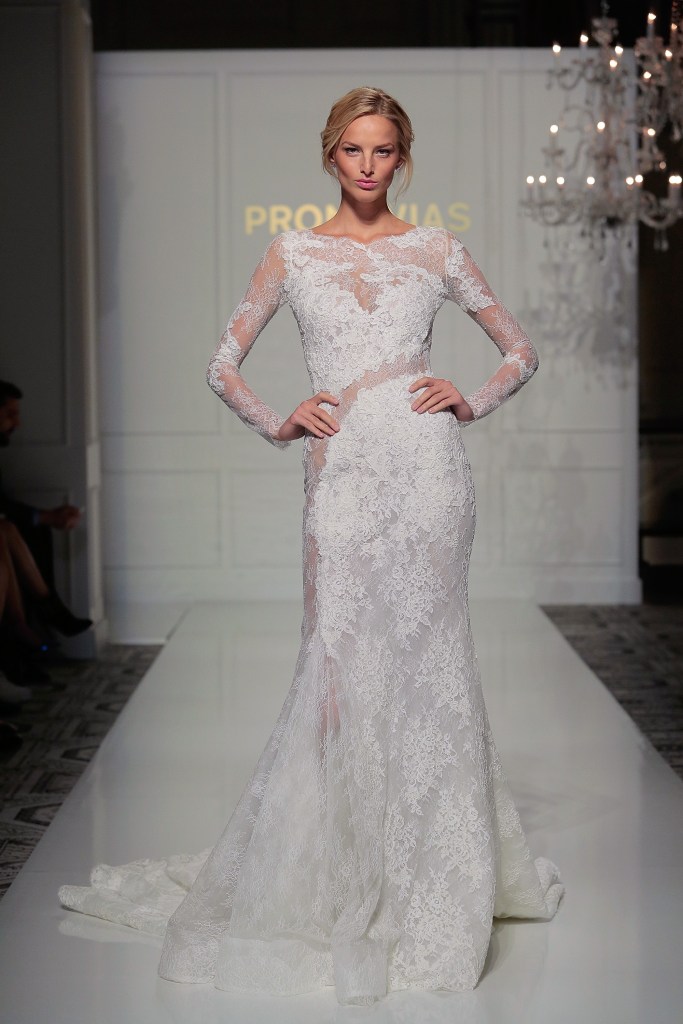 And while not every look is as blatant—or as baring—as that Theia gown, a pretty hefty number of designers also embraced revealing silhouettes. At Pronovias, most dresses had an element of sheerness, with several offering risqué illusion necklines or a panel of mesh starting at the waist that meandered down to the thigh, and Naeem Khan showed a variety of nude and sheer gowns.

And then there’s Vera Wang, who took the idea of sheer and used with reckless abandon. Her gowns featured mostly classic silhouettes, but instead of layer upon layer of tulle, satin, and crinoline, you see only a lace pattern – and possibly, a VPL (seriously, is underwear even an option in these cases?)

But don’t think the influx of “naked” dresses means that all brides will be waltzing down the aisle in a veil and nothing else.

“It’s all about preference,” Strauss says—and the key is moderation. Do either a sheer top or a sheer skirt, not both, she advises. “Just make sure you’re showing off the good bits.”