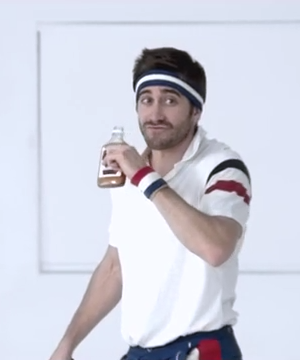 What can beat Megan Fox‘s explosive performance alongside Dominic Monaghan in Eminem‘s “Love the Way You Lie” or Ke$ha‘s steamy rendezvous turned rainbow death match with James Van Der Beek in the video for “Blow?” Even Mischa Barton is reemerging onto the scene in Noel Gallagher’s High Flying Birds new video “Everybody’s on the Run.”

From Shia Labeouf‘s … ahem … revealing turn in the new Sigur Rós vid to Zach Galifinakis‘ entertaining impersonation in Fiona Apple‘s “Not About Love,” here are our favorite celeb appearances in some great music videos over the years.

Joe Jonas, Jake Gyllenhaal and more in “Giving Up The Gun” by Vampire Weekend

Jake Gyllenhaal in “Time To Dance” by The Shoes

Johnny Depp and Natalie Portman in “My Valentine” by Paul McCartney

Megan Fox and Dominic Monaghan in “Love The Way You Lie” by Eminem Feat. Rihanna

Christopher Walken in “Weapon of Choice” by Fatboy Slim

James Van Der Been in “Blow” by Ke$ha

Liv Tyler and Alicia Silverstone in “Crazy” by Aerosmith

Naomi Campbell, Cindy Crawford, Christy Turlington and more in “Freedom ’90” by George Michael
Zach Galifinakis in “Not About Love” by Fiona Apple
Macaulay Culkin in “Black and White” by Michael Jackson
Dave Navarro, JC Chasez, Tommy Lee and more in “We Are All Made of Stars” by Moby
Courtney Cox in “Dancing in the Dark” by Bruce Springsteen
Chevy Chase in “You Can Call Me Al” by Paul Simon
Natalie Portman in “Carmensita” by Devendra Banhart
Johnny Depp. Matt LeBlanc, and more in “Into the Great Wide Open” by Tom Petty and the Heartbreakers
Alexander Skarsgård in “Paparazzi” by Lady Gaga
Justin Timberlake and Pee Wee Herman in “This Train Don’t Stop There Anymore” by Elton John
Winona Ryder in “Talk About the Blues” by The Jon Spencer Blues Explosion
Jason Biggs and Mena Suvari in “Teenage Dirtbag” by Wheatus
Michael Cera in “No You Don’t” by Islands
Juliette Lewis in “Run Around” by Blues Traveler
Tags:
StyleCaster