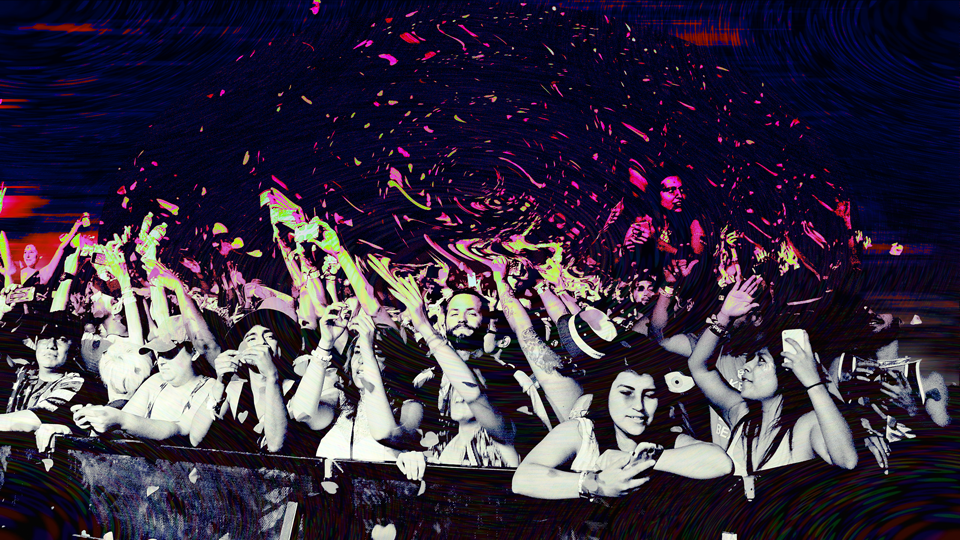 ’Tis the season of painful clichés: flower crowns, Ferris wheels, and fringe as far as the eye can see. (See: Vanessa Hudgens at Coachella.) For some people, the words music festival might legitimately mean listening to music, but for most who attend, the words translate to something else: excess. Part of this excess, for better or worse, includes lots and lots of drugs. Never mind that they’re illegal in most of the world—they were illegal at Woodstock in 1969 too, right?

In honor of Coachella’s kickoff weekend—and the narcotic-fueled summer music festivals that follow—we begged 21 real twenty- and thirty-somethings to spill their most outrageous tales of drug use at various music-themed events. Whether you think these stories are utterly magical or a terrifying glimpse at a generation, we guarantee you’ll at least be entertained—and afraid to accept anything from strangers ever again.

Just a note that their stories were contingent upon preserving their anonymity for (very) obvious reasons.

“For my friend’s 25th birthday, a group of us all went to a music festival in New York. It was a relatively boozy but drug-free day. That was until we left and, in exchange for her wristband, a stranger gave our 125-pound birthday girl a stack of pot brownies, which she promptly consumed in the taxi to a bar in Brooklyn to continue day drinking. We were there for hours, while our (high, very) friend lay sprawled across three chairs crying. Every time we tried to touch her to pick her up and leave, she screamed. Eventually we just hoisted her up and carried her out while she threw up all over the other patrons. A truly memorable birthday.” (Female, 25, New York)

“I was at Big Cypress in 2000 to see Phish. Best. Concert. Ever. I had tripped that afternoon [and] was flying high that night. I actually thought the stage was on fire. WTF. Anyway, we found a nitrous tank, I literally thought I was levitating, I pictured myself as a glowing orange ball of energy, trapped in a prison cage, and then I pretty much blacked out.  When I came to, I was in the middle of the craziest drum circle I’ve ever found myself in.” (Male, 37, New York) 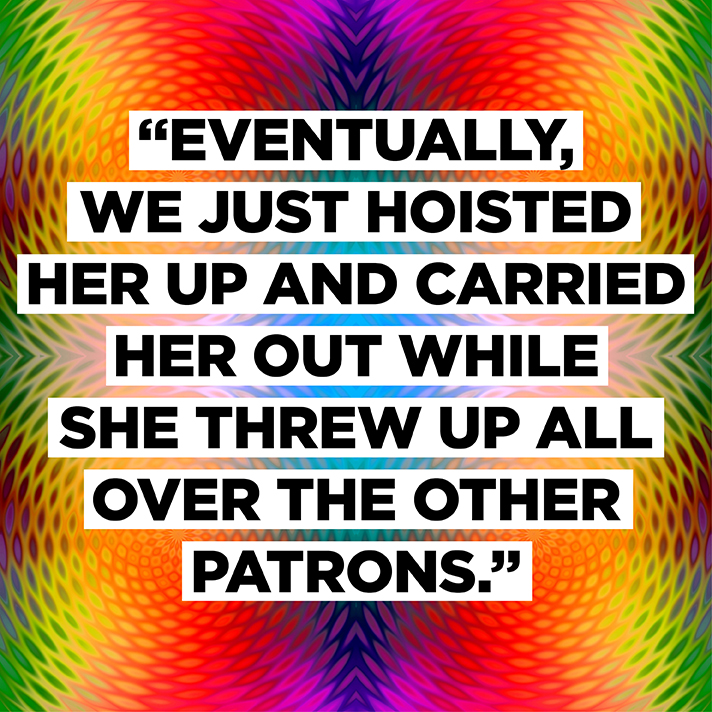 “Which one is worse? Losing my car at one festival, losing my rental car keys at another, or losing myself at both? Being the last one left on an island after a music festival pre-Uber days was like being cast away on a desert island—New York City’s Randall’s Island, that is. At 4 a.m., I managed to get driven to my parents’ house 40 miles away to get the spare keys to my New York apartment while in a post-EDM music festival state of mind.” (Male, 33, Queens, New York)

“I had a friend who picked up a pill from a portable-toilet floor and actually consumed it. I realize that sounds like a confession—’a friend’—but it wasn’t me.” (Female, 25, Sydney) 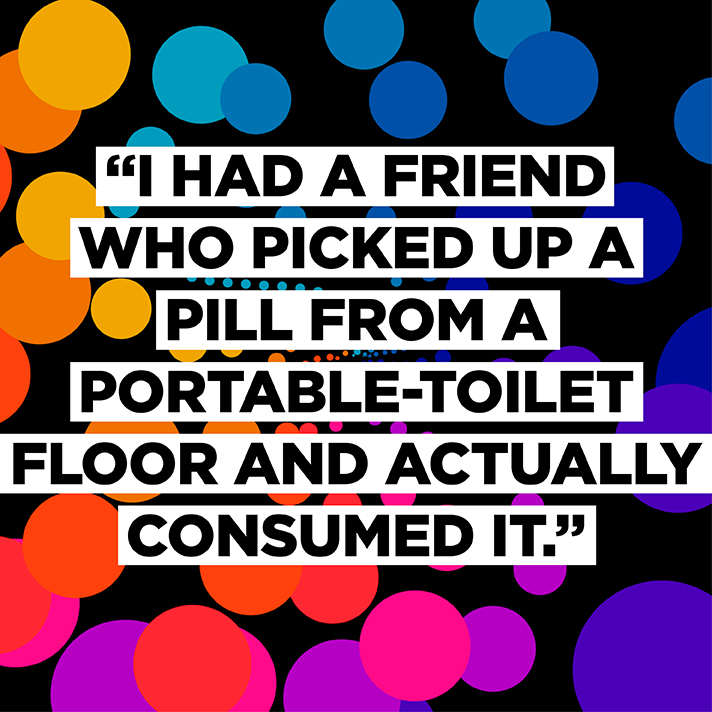 “I got so stoned at Coachella that I missed Beyoncé. I cried about it.” (Female, 26, New York)

“[My friends and I] drove from Ann Arbor, Michigan, to Cleveland, Ohio, for a Phish show. We ended up accidentally buying fake tickets, trading them for possibly the best weed ever, and then getting the fuck out of Cleveland and never looking back. ” (Male, 37, New York)

“Two of my friends, after Brisbane’s Parklife festival, went to the airport bar, high AF, to keep drinking, and decided to book an impromptu flight to Sydney with no luggage and nowhere to stay.” (Male, 28, Brisbane, Australia)

“Oh, you mean that time I got arrested for doing Molly at [Miami’s] Ultra? That was fun. The worst part about it wasn’t even the arrest. It was that my girlfriend dumped me after I was released for a guy she met who gave her more Molly after the cops took me in. I think they’re still together.” (Male, 27, Florida) 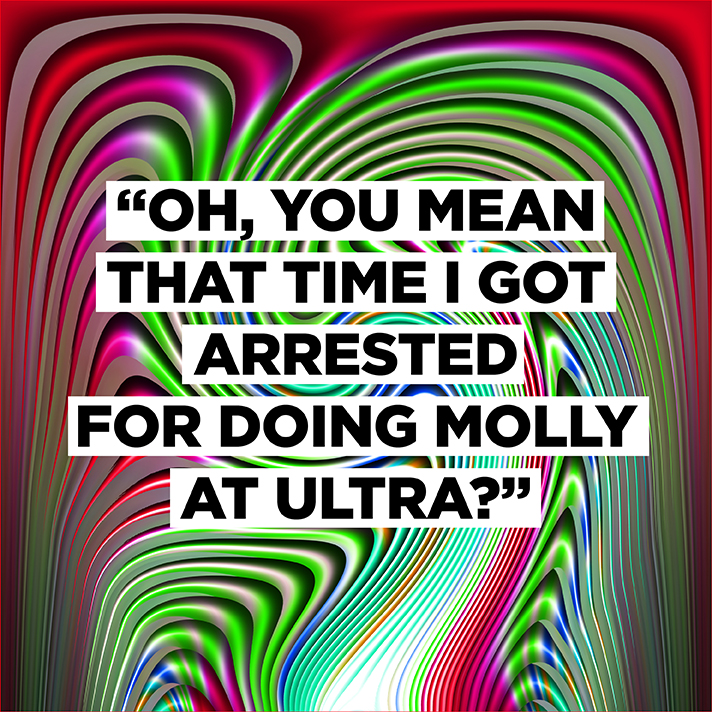 “One time at Good Times festival in Australia we all took pills—ecstasy mixed with I don’t even know what—and hallucinated, and 10 out of 12 of us ended up in hospital, LOL. Almost dying isn’t really the funniest story though.” (Female, 31, New York)

“A person very close to me—and I can absolutely vouch that this did happen—told me that while LCD Soundsystem was playing she had to pee. There was no way to get to a bathroom, she had no out, she had no options, and she was stoned off of her face and therefore paralyzed and confused. So she peed, standing there, in the middle of the crowd.” (Female, 34, New York)

“I think music festivals are the worst, but when my boyfriend bought me a ticket to All Points West at NJ’s Liberty State Park because his favorite band, Radiohead, was headlining, I went. I was bored most of the day, especially since there was a drinking pen you had to enter that only allowed you to buy one beer at a time. At that point, I knew I had to do something to enjoy the festival more (and drown out the sound of Kings of Leon), so when my BF’s friends broke out the weed, I joined in. The next thing I remember, I’m having heart palpitations while pushing my way through a crowd of thousands to get closer to Radiohead—who I don’t even like. It’s dark and I know I’m having a bad reaction to the weed—the crowd was literally spinning and I was sweating, so I decided on a whim to push my way out, losing my boyfriend, and sitting on a deserted hill, head between knees, until I calmed the fuck down. But wait—my Blackberry (it was 2008) was completely dead. Luckily, my BF found me before the show was over, and I told him the only thing that would save me is a chicken sandwich and french fries. Which it did.” (Female, 34, Brooklyn) 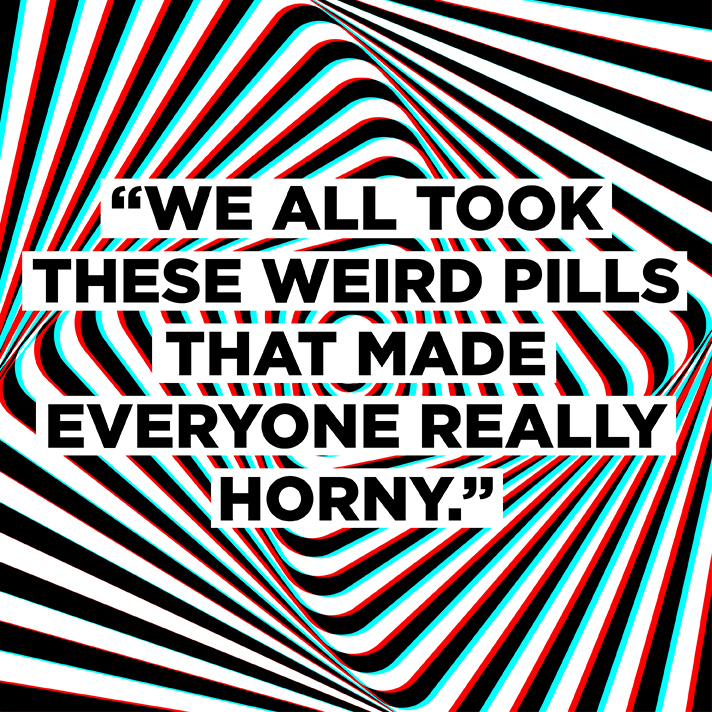 “I don’t go to many anymore, but I remember before festivals we used to spend an entire morning—hours!—driving around chasing drugs down, and then we’d put them in Cling Wrap in a neat row, and store them behind our top lips when walking into a festival. Sneaky.” (Female, 26, Brisbane, Australia)

“We were at Splendour in the Grass, the final night of the festival, when [my friends] decided to do the last of their supply. They already had a pretty vicious cocktail in them by that stage, but one [friend] stated before swallowing the last caps that he’d ‘saved the best for last.’ We went back to our tent and fell asleep. Hours later, I woke to the sound of two people whispering aggressively. I rolled over and turned on my [flashlight] to see what the commotion was only to be steamrolled by one of the boys telling me to turn the light off or else ‘they’ will get us. One of my paranoid friends then made a run for it out the front of the tent and into the darkness in fear that I’d blow their cover. I managed to contain the other who was completely frantic, and get him into the sleeping bag. Then, someone let off fireworks just a few meters from our tent. My friend bounced from one side of the tent to the other thinking we were receiving heavy gunfire. On the third attempt, thankfully for all else in the tent, he managed to rip a man-sized hole out of the side of the tent. The last I saw, he was disappearing into the darkness yelling, ‘Ruuuuuuuuuuun, everyone, ruuuun!'” (Male, 28, London) 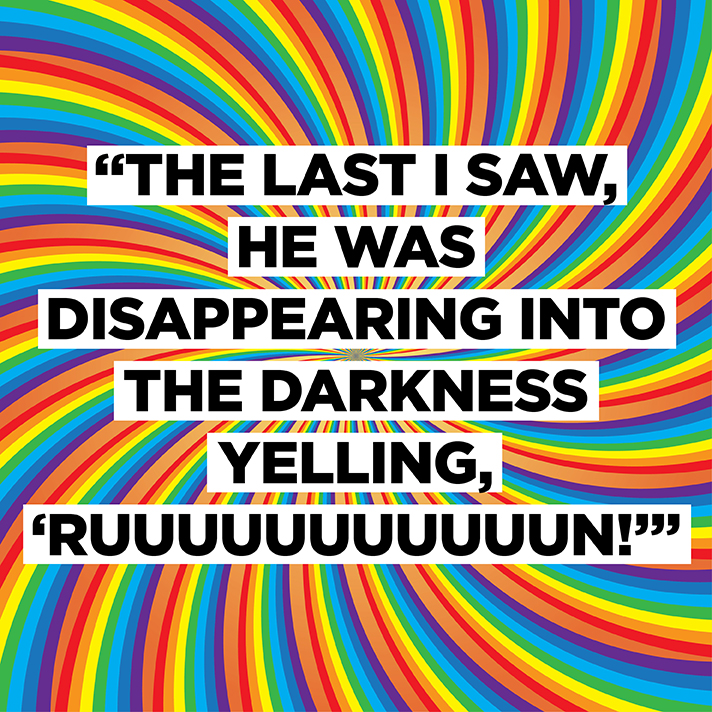 “That time I went to Merriweather Post Pavilion in Maryland and bought fake Chinese mushrooms at a Phish show only to find the guy who sold them to me and demanded my money back. I got my money back. And I found real mushrooms two minutes before I walked into the venue!  I split them with my friend, who ended up bugging the FUCK out. Wish I could do it again!” (Male, 37, New York)

“After two or three days of minimum sleep and maximum drug consumption, tripstacy-induced paranoia had truly set in. My friend was so convinced someone was out to get him that he locked himself in the back of his car for two days and we eventually had to break in to get him out.” (Male, 26, London) 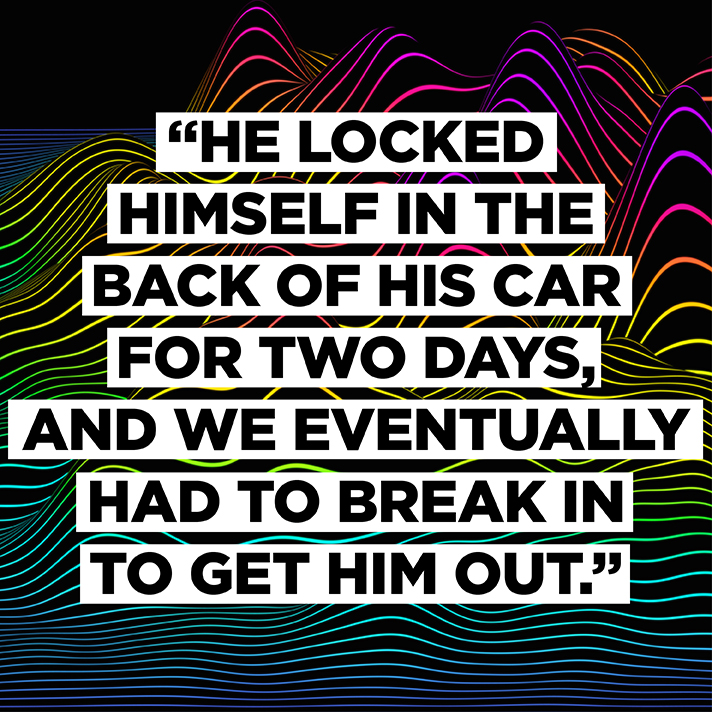 “One time after doing Molly at a festival, my friends got in a [random] car that wasn’t a taxi or Uber, and made them drive us home. I threw up out the window while we were driving.” (Female, 23, Vermont)

“Once I smoked salvia and envisioned that my entire life was a dream and everyone was puppets, and I would never see my family again and everything was closing in on me and the entire universe was happening in front of me. Then I came to [a salvia trip is like three-minutes long]. Everyone was laughing at me because I had been screeching and crying and drooling.” (Female, 23, New York) 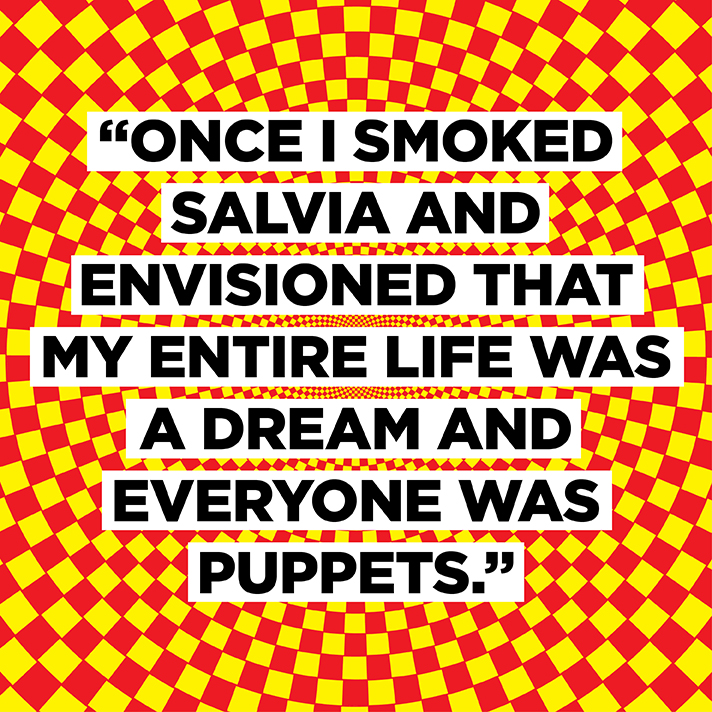 “At Pemberton Music Festival in 2014 we were doing quite a bit of M pretty early in the day, so I was calling it MDMday (a fab way to experience the sunshine and beautiful voices )—then one night during Outkast after crashing hard, I found a large baggie that had been stepped on one million times with what I had a feeling to be more M, so I then decided by myself to take what I referred to as MDMground. It was so intense, but now when I look back I’m like, ‘what the hell was I thinking?'” (Female, 26, Toronto)

“A friend got so hammered pregaming before Future Music Festival near their house that they walked in, walked out, and then fell asleep on their neighbor’s lawn while trying to walk home.” (Male, 28, New York)

“When I heard Tori Amos was playing at Bonnaroo 2010, I jumped around my dorm room shrieking and dancing. She was my favorite artist, I had discovered my favorite drug (ecstasy) at the previous Bonnaroo I’d attended. Four months later, I bought my ecstasy for a fair $20, stuck it in my bathing-suit bottoms with a baggie of prerolled joints, and braced for impact. I ate my ecstasy about 40 minutes before Tori took the stage, and as she walked on, something seemed off.

I suddenly got very thirsty. I drank my bottle of water. I drank my mom’s bottle of water. I asked a photographer for a bottle of water, and he brought me two bottles. I couldn’t see anything but the side-eye Tori seemed to be giving me as she shifted between keyboards during ‘Precious Things.’ I was shaking and sweating and had to get out of there. I turned around and, upon seeing how batshit dilated my pupils were, the crowd parted like the Red Sea. I ran down an aisle straight to a water station, and it was dry! I saw some white kids with dreadlocks selling bracelets and weed, so I asked them if they had any water. They took me back to their tent, where I had about six more bottles of water until realizing that this wouldn’t be subsiding anytime soon. After getting a golf cart to the medical tent, I projectile vomited and proceeded to hallucinate and convulse in a cot for the next several hours.

At one point, I asked a volunteer to help me to the medical tent outhouse. He asked, ‘Do you want some Oxy to calm you down?’ I said no. What I did repeat, however, was ‘I’LL NEVER BE A DOCTOR NOW!’ When I finally returned to my car at 4 a.m., accompanied by a kid who had done too much ’shrooms and tried to kill himself, I vowed never to do ecstasy again. And I didn’t—until a pretty girl offered me some about a year later. Like my love of drugs and ‘new experiences,’ my love of Tori Amos has since subsided. I did become a doctor, though.” (Female, 26, Austin)