The Half of It, which premiered on May 1, follows a Chinese-American teenager named Ellie Chu who makes money by writing essays for her classmates. One day, a student named Paul asks Ellie to finish the love letter he wrote to his crush. But when Ellie reads the name on the note, she realizes that the girl Paul is secretly in love with is the same girl she’s secretly in love with as well. So begins a Cyrano de Bergerac-like tale where Ellie helps Paul woo the same girl she also has a crush on.

If you can’t tell by now, The Half of It is a love story between two teenage girls. We won’t spoil the ending, but we can promise you that the film is a fresh take on an old genre: the teen rom com. After you finish The Half of It, watch these essential gay romantic comedies next. 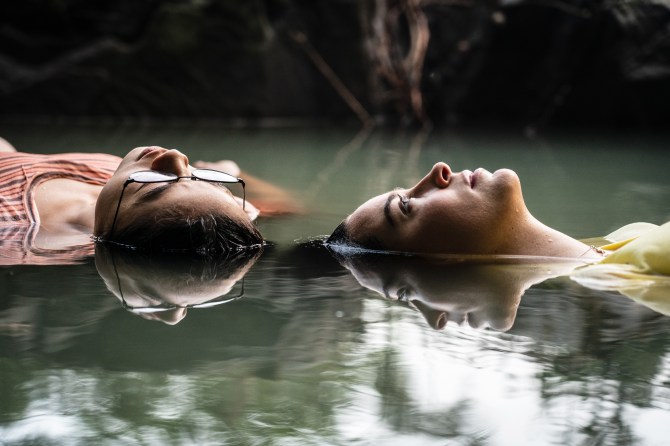 Saving Face is the next movie that should be on your watch list after The Half of It. Directed by Alice Wu (the same director as The Half of It), the film is about Wilhelmina, a young Chinese-American surgeon, who’s closeted from widowed mother and traditional grandparents. The film explores how pressure from Wil’s family affects her relationship with her openly gay girlfriend Vivian.

Based on Becky Albertalli’s 2018 book Simon vs. the Homo Sapiens Agenda, Love, Simon follows a gay closeted high school student, named Simon Spier, as he’s blackmailed by an anonymous classmate who threatens to out him to the school. As he tracks down his blackmailer, Simon starts to fall in love with another  anonymous student online.

But I’m a Cheerleader stars Natasha Lyonne as Megan Bloomfield, a high school cheerleader who’s sent to a conversion therapy camp to cure her “lesbianism.” While there, Megan starts to embrace her sexuality even more and fall for one of the other girls. The film is a satire about conversation therapy and director Jamie Babbit’s own experience with similar programs as a child.

G.B.F., which stands for “Gay Best Friend, is a teen comedy about two closeted high school students: Tanner and Brent. When Tanner is outed, he’s taken in by the cool girls of the school and becomes more popular than his friend. But the film doesn’t rely on offensive stereotypes for jokes. Instead, it pokes fun at them and satirizes how some straight people fetishize gay friendships.

Imagine Me & You is your typical rom com, but with same-sex leads. The film centers on the relationship between Rachel (Piper Perabo) and Luce (Lena Headey) who meet on Rachel’s wedding day. As Rachel is set to be wed to a handsome man named Hector, she meets Luce, a flower shop owner who she can’t help but fall for. While Imagine Me & You may not be the most innovative rom com, the classic plot and heartwarming feel of the film proves that it’s still a good watch.