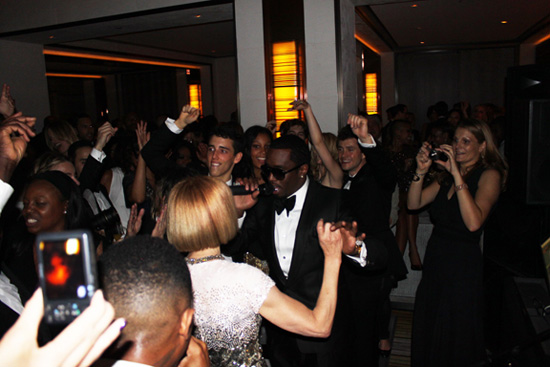 Diddy and Anna Wintour break it down in 2010.

When it comes to red carpets, there are none as fashionable as the Costume Institute Benefit at the Metropolitan Museum of Art—or the Met Gala, as its more commonly known. This year’s event will be held on Monday, May 6, and it celebrates the museum’s sure-to-be amazing “Punk: Chaos to Couture” exhibit (a sneak peek here!). As the exhibit’s theme tends to influence the way guests dress, you can bet that you’ll be seeing celebrities and fashion folk turning out their best punk looks.

In honor of the theme, we decided to take a look back at Met Galas of years past and pick the best badass moments that can definitely be classified as punk rock—from a certain Hollywood star headbutting a top designer to starlets ditching their gowns for jeans and sneakers.

1. Proenza Schouler Designer Headbutted by Kiefer Sutherland: By far the most memorable Met Gala after party debacle occurred in 2009 at New York hotspot SubMercer, and it involved “24” star and known party animal Kiefer Sutherland, Brooke Shields, Proenza Schouler designer Jack McCollough. According to Sutherland, McCollough pushed Shields and didn’t apologize. Then, McCollough allegedly pushed Sutherland—who proceeded to headbutt him, leaving the designer with a broken nose (meanwhile, Shields stated that McCollough never actually pushed her.) McCollough told investigators that Sutherland was absolutely wasted, and stated: “He pulled this stupid wrestling move like a teenager. He was just roiling drunk and looking for something to smack.” We wonder what Anna Wintour said when she heard the news.

2. Anna Wintour Gets Down and Dirty with Diddy: People give Anna Wintour a hard time, and the media loves to perpetuate the image that the Condé Nast artistic director and Vogue editor is an ice queen—but at the after party in 2010 at New York’s exclusive Boom Boom Room, she proved she was quite the opposite. Wintour danced all night, at one point in the center of everything with Sean “Diddy” Combs. Another unlikely duo who cut a rug that night? Oprah and Pharrell Williams.

3. K-Stew Trades Her Gown For Denim: It’s a well-known fact that Kristen Stewart despises being on the red carpet, and often changes into her Converse sneakers immediately after. At last year’s Met Gala, after she arrived on the arm of former Balenciaga creative director Nicolas Ghesquière, she promptly ditched her custom color-block dress and hit the after party in a ratty white T-shirt, skinny jeans, and sneakers. To be fair, she was repping Balenciaga in one of the label’s quilted leather jackets, but everyone else was still wearing their gowns.

4. RiRi Parties Too Hard; Rushed to Hospital: It seriously seems like Rihanna has been taking a cue from Sid Vicious with her hard partying lately. Last year, after rocking the red carpet in custom alligator Tom Ford, she raged all night at the after-party—and had to be rushed to the hospital in the early morning after for “exhaustion” and “dehydration,” which we all know is PR spin for too much drinkin’ and druggin.’

5. Kate Upton Gets Drunk and Falls in Sparkly Michael Kors: After a slew of reports that model Kate Upton paid $25,000 for a Met Gala ticket, she caused another stir while exiting the event alongside Aziz Ansari. The loopy and allegedly drunk 20-year-old took a tumble in her Michael Kors frock for a slew of paparazzi and fans to see. We have to ask: Was the $25K worth it, girl?

6. Mickey Rourke’s Chivalrous Turn: First of all, why was Mickey Rourke even at the 2011 Met Gala after party at the Boom Boom Room? Perhaps the success of his 2008 film “The Wrestler” carried over, but either way, he was nothing but a gentleman at the event. When British bombshell Rosie Huntington-Whiteley lost an earring, he immediately grabbed a flashlight from a staffer and got on the ground to look for it. No word on whether or not he actually found the jewelry—but momentarily ditching your bad boy image to help a lovely lady out is pretty punk to us. We’re sure he went right back to making statements like this.