Who doesn’t love following celebrities on social media? It’s like the ultimate inside look at their personal lives, especially when they invite us into their homes.

Sometimes, we’re inspired by their home decor, but for the most part, we’re watching their Instagram Stories, jaws to the floor, completely in awe of their over-the-top estates and lifestyles.

Ahead, we’ve gathered eight of the craziest, most lavish, incredibly excessive celebrity homes worth gawking over. 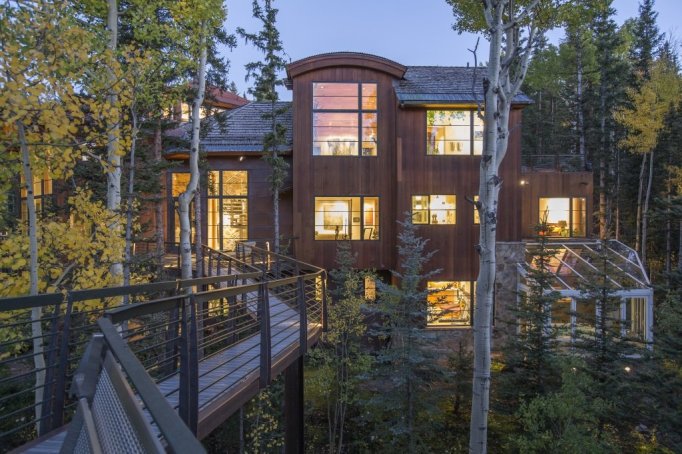 You can’t have a celeb homes list without the queen of indulgence, Oprah Winfrey.

Winfrey owns six homes, and she’s spent over $100 million on the six estates she currently owns. That said, it was pretty difficult to pull just one home from the list because they’re all so incredible. But we chose one, and, no, it’s not the home she spent the most money on.

With a treetop fire pit, a $70,000 limestone tub and a 56-foot-long wine tunnel that holds 1,600 bottles of wine—among other features—Winfrey’s home in Telluride, Colorado, takes the cake.

She paid $14 million for the five-bedroom, six-and-a-half-bathroom mansion—and it was completely furnished.

At 30,000 square feet, this fortress has a spa, wellness facilities, a media room, a full basketball court, four swimming pools and bulletproof windows and glass walls, according to the Los Angeles Times.

It doesn’t even end there. The outdoor living space adds an extra 10,000 square feet to Bey and Jay’s relatively new digs.

To top it all off, Elle reports that the massive home even has a candy room. Blue, Sir and Rumi are three lucky kids.

In 2014, Kim Kardashian West and Kanye West dropped $20 million on the more than 15,000-square-foot, eight-bedroom estate in Hidden Hills, California.

What makes this French country-style home over-the-top, though? Not only does it have two pools, two spas, a sauna and dual baths, but it also has its own vineyard.

TMZ reports that the Wests also sunk $20 million into landscaping and home renovations, including expanding the size of the master bedroom and adding a recording studio.

Thanks to all those renovations, though, they managed to increase the value of the home to $60 million, three times what they purchased it for. 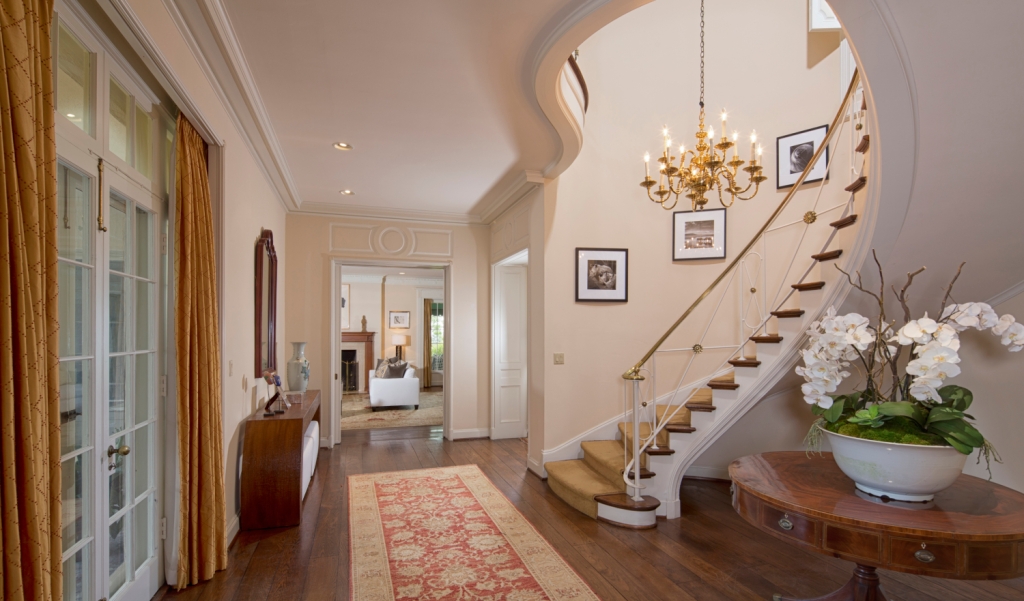 Taylor Swift has a total of eight homes, but at nearly 11,000 square feet, it’s her Beverly Hills home that takes the cake.

Swift purchased the seven-bed, 10-bath Georgian revival mansion in 2015 for $25 million, and she actually managed to get the Beverly Hills City Council to vote in her favor and designate the home as a historic landmark in April 2017.

Oh, and did we mention the home has a screening room, a library, a gym, a private guest apartment and a guest suite with a private entrance? 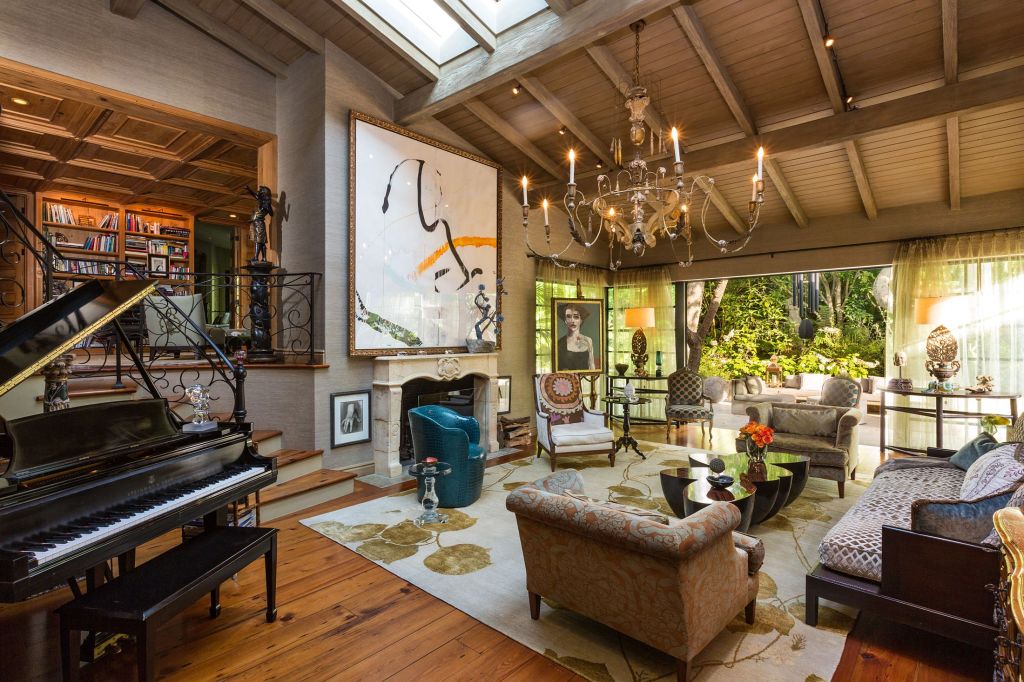 In 2016, Jennifer Lopez bought a $28 million home, adding to her properties in the Hamptons and Manhattan.

The five-bedroom home has classic French and Southern influences, but it definitely has some modern touches too. With a vineyard, antique doors and a terrace, the home also has an infinity pool, 100-seat amphitheater, a man-made pond with a beach, a 30-seat theater, a library and a greenhouse. 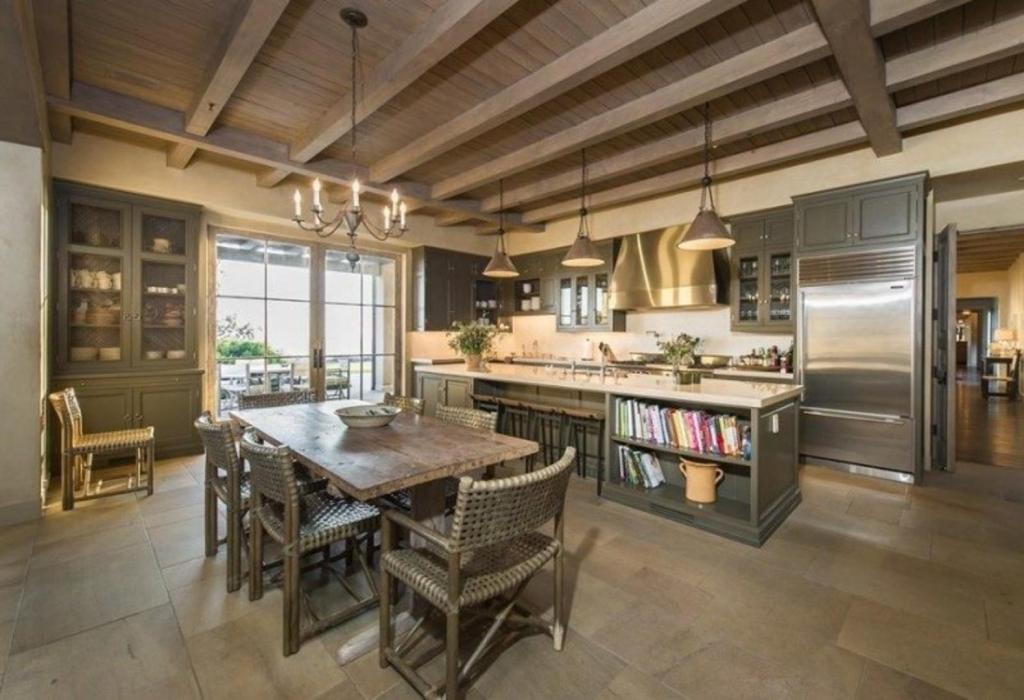 Gaga calls her $22.5 million beachside estate in Malibu her “gypsy palace,” and it truly looks like one.

Purchased in 2014, the 10,000-square-foot, three-bedroom home has a wardrobe suite, likely to store her equally over-the-top gowns and costumes she has worn over the years at award shows and galas. She must frequent this room often too, because it reportedly has a refrigerator in it.

In addition to two fireplaces, two bathrooms, a saltwater pool, a hot tub, rose gardens, a horse barn, grazing pastures and horse trails for her horse, Arabella, an 800-bottle wine cellar, a home theater and a bar, the home also has a two-lane bowling alley. According to Realtor, the only way to reach the bowling alley is through a secret door and passageway from the living room. 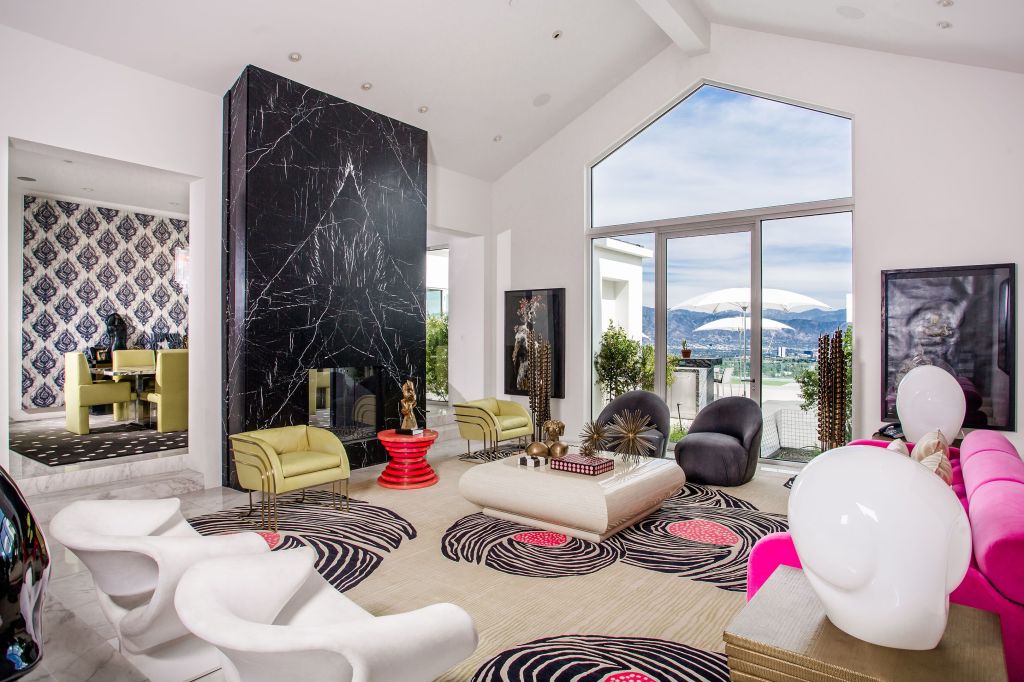 Although currently on the market, Gwen Stefani’s 11,845-square-foot Beverly Hills home deserves a spot on this list.

In true whimsical, cool Stefani style, the modern home has graphic patterns galore and splashes of neon colors throughout—except in the kitchen, where it’s decked out in black-and-white stripes.

The home also has a chicken coop, an outdoor pizza oven, a full tennis court, an infinity pool, a playground for the kids and more.

Plus, the previous owner is another famous lady on this list: Jennifer Lopez.

Yep, Bruce Willis has a gorgeous mansion, because of course he would.

Tucked away in Bedford Hills, New York, Willis’ $9 million, 8,400-square-foot home has it all.

In addition to five bedrooms and eight bathrooms, this high-tech mansion has a wine cellar, a tree house, a 50-foot swimming pool, a tennis court and—wait for it—a climate-controlled, 1,500-bottle wine cellar.