It’s definitely not unusual to see a celebrity dressed in head-to-toe black. It’s equally the norm to see an influencer flex on the Gram in head-to-toe neutrals. But all-over hot pink? A full fiery red ‘fit? Gigi Hadid, Kim Kardashian and Kylie Jenner are proof of this season’s monochrome outfit trend—and apparently, the brighter the better.

To be honest, this makes a lot of sense. According to virtually all of the runways, saturated brights are this season’s biggest trend, a perfect chance to shy away from boring pastels but not go full-on rave mode with neons. Vibrant greens, blues, pinks and purples have been everywhere this season! But while many opt for tonal looks in multiple shades to weave these colors in, some opt for head-to-toe monochrome madness.

Gigi Hadid is the latest celebrity to step out in a single-shade standout look. The supermodel wore a hot pink mini dress to Prince’s Trust Gala and every detail down to the sky-high heels were made to match. With the extra height from her platforms, Hadid could literally step up in some superhero-worthy situations (like saving a cat from a tree) and she’d look amazing doing it. 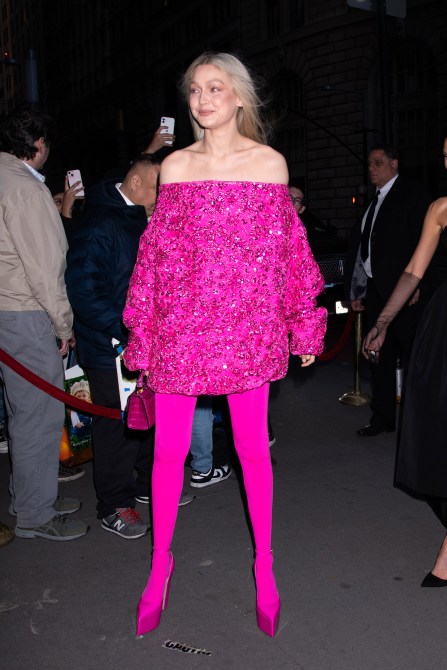 One look at the particular shade of pink that Hadid is wearing, and you’ll instantly recognize the ensemble as Valentino. In case you missed it, Valentino’s latest runway show was dominated by the shade and now every celebrity seems to be taking turns dressing up in “Valentino pink”. Gigi Hadid’s entire look was straight from the runway. 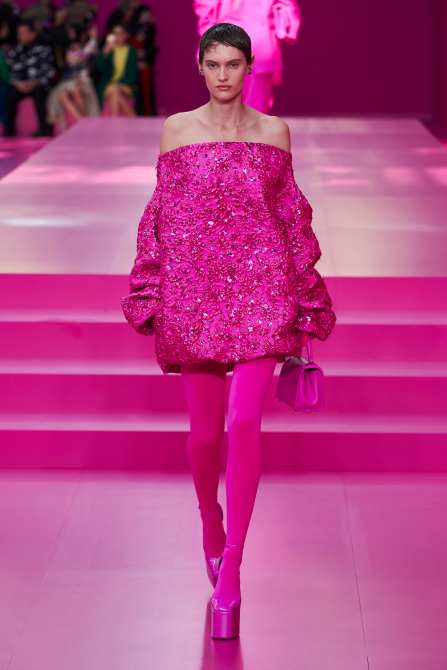 Gigi Hadid and Valentino aren’t the only celeb-designer duo that’s partial to pink. Kim Kardashian wore a full-on hot pink Balenciaga look while out and about in New York City prepping for her SNL hosting gig and literally looked like a superhero. Or maybe the pink Power Ranger? 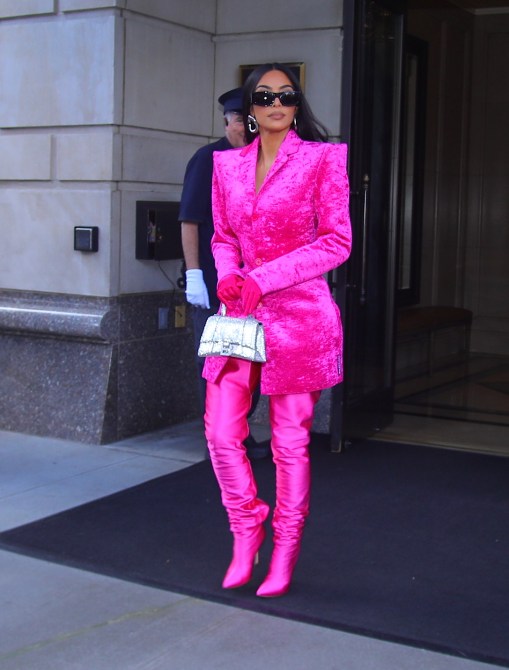 Kardashian’s Balenciaga look included a blazer dress with super-structured point shoulders, thigh-high shiny pink boots and a silver Hourglass bag, styled with chunky silver earrings and black sunnies. I could totally picture her wearing the same exact thing in all-black during any era of her ever-changing personal style, but the pink feels like a major shift. And I’m loving it!

Of course, Kardashian has been going a bit bolder with her look since all the relationship drama that went down between her and maybe-still-husband Kanye West. Many thought Kim was changing her style after he controlled her image for so long, but now that it seems they’re still together, it’s safe to say she’s the one calling the shots. Maybe she just felt like switching things up!

Over on the ‘Gram, her little sister Kylie was serving a same-but-different vibe, with her monochrome color of choice being bright red.

Don’t lie, she kind of looks like a superhero too! Or maybe it’s the start of a devilish Halloween costume? Jenner posed in a Richard Quinn one-piece which included gloved sleeves and heels. The designer showed a ton of full-coverage saturated monochrome looks on his SS22 runway, so it’s no surprise Jenner noticed and wanted one for herself. 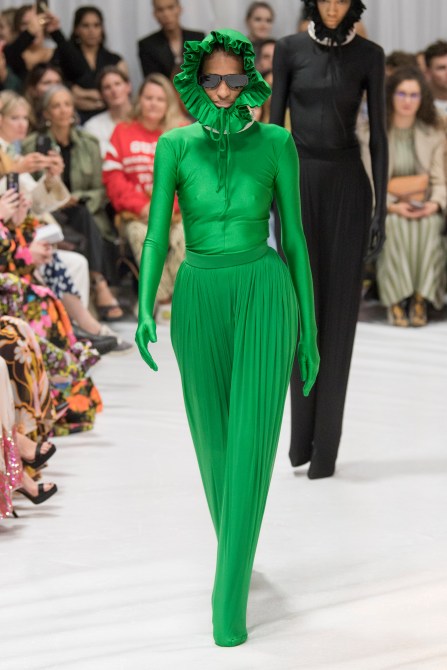 Overtop the jumpsuit, Jenner wore a long red coat with structured shoulders that reminded me of Kardashian’s pink OOTD. And if you swipe to the third slide in her post, I swear to God she’s carrying a Vera Bradley bag. I know she’s probably not and it’s Balenciaga (the silhouette gives it away), but I’ll be damned if it doesn’t look like one.

Kardashian, Jenner and Hadid are never boring dressers, but these are certainly some of their brightest looks to date. And like I said, they only confirm the fact that monochrome saturated brights are essential this season! As much as you may prefer to play it safe with all-black or neutrals, I encourage you to branch out and play with color in the name of a good celeb-approved OOTD. Just pick your favorite color and go!