In season 4 of The Real Housewives of Potomac, Monique Samuels, who was pregnant with her third child at the time, got into a heated argument with castmate Candiace Dillard at a country-style hoedown. As the two were separated by another cast member, Monique yelled what would soon become one of the iconic lines in Bravo history: “I will drag you, pregnant and all!”

“That blew up. Everyone was talking about it,” Monique tells StyleCaster. “I remember reading some comments where people were like, ‘Oh, Monique’s the drag queen.’ I was like, ‘That actually would be an interesting title.”

And thus came the idea for Monique’s first post-Housewives single: “Drag Queens.” The song, which was recorded before quarantine, was written as an outlet for her stress after filming season 5 of RHOP, which premieres on Sunday, August 2. (The trailer for the season shows a physical fight between her and Candiace.) “The song is me reminding myself of who I am as a person, what I stand for, what I don’t stand for,” she says.

But the track, which features Monique’s husband, former NFL player Chris Samuels, includes more Housewives references than her “drag me” moment with Candiace. The music video, which was created by an animator in quarantine, starts with a pregnant woman who gives birth to the lyrics, “I was born ready, but I’m never done,” as a reference to Monique’s pregnancy journey on RHOP. The music video also shows a woman with an umbrella, which was a nod to Monique’s infamous moment in season 3, where she almost choked a castmate with an umbrella.

Bravo fans will also recognize one of the lyrics from “Drag Queens” as Monique’s tagline for RHOP season 5: “Maybe if you tried a little harder, you wouldn’t have to try me.” “That was actually written by my brother two years ago,” Monique says. “It was just natural to make sure I included it in the song.”

As for if any Housewives have listened to the song, Monique, who plans to release a mini album, has only heard from two costars: Karen Huger and Ashley Darby. “Karen has definitely heard it. She reached out to me and retweeted my post when I announced that the video was out,” she says. “Ashley I know for sure has heard it. She posted it on her Insta Story. They both gave me excellent feedback. They were excited. They love the song.”

And while Monique had to create her music video in quarantine, she confirms that she won’t have to film any at-home confessionals for RHOP season 5 unlike other Housewives shows. “We were able to get everything done,” she says. “I don’t know about any other ladies, but I personally did not have to do any at-home confessionals. Grateful for that. I get through them pretty quickly.” As for season 6, Monique tells StyleCaster that RHOP would be filming its next season around this time, but because its current air date was pushed back, she’s unsure of when production for season 6 will start. “That is something that is totally and completely up in the air,” she says.

Ahead, Monique talked to StyleCaster about how she prepared for RHOP, what fans can expect from season 5 and why costar Gizelle Bryant is a “hypocrite.” 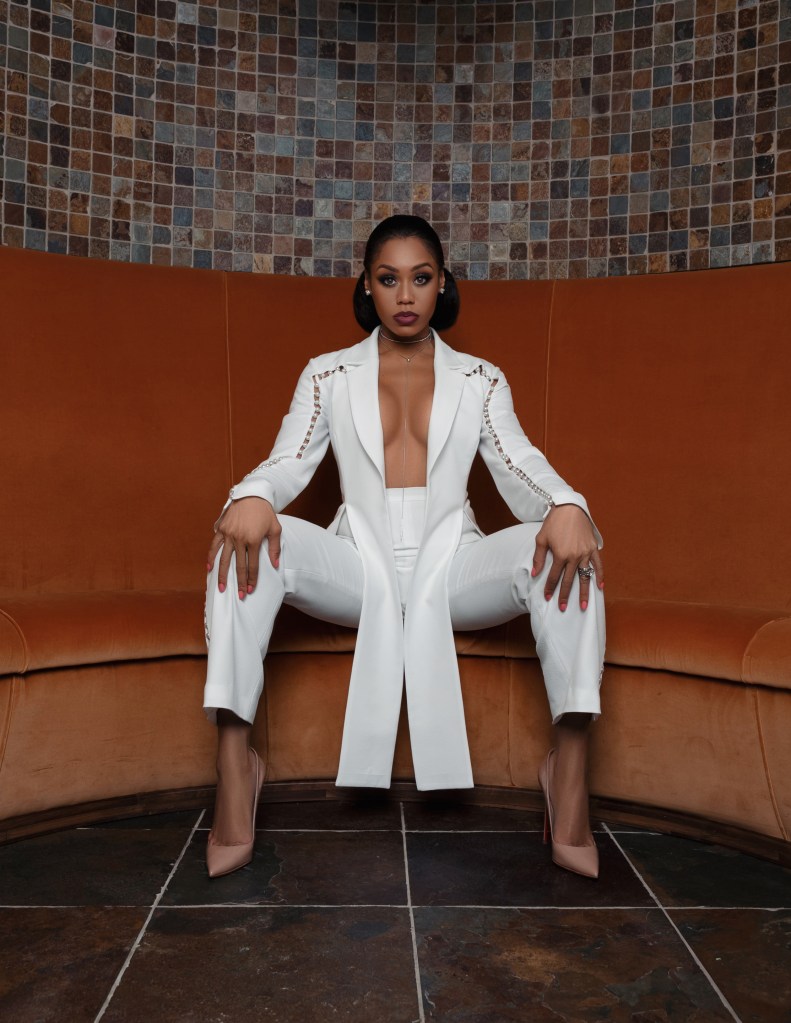 “She was just another hypocrite being hypocritical. Because there are so many moments where she did not raise or better the stereotype. She brought Robyn in season 2 to Ashley’s place of business, and Robyn went off on Ashley, which could have turned physical if Ashley was a different person. Ashley was also having issues with Charisse at the time, and I remember Gizelle saying, ‘Charisse will drag you. She will drag you. Under the river and through the woods.’ I remember her really egging it on. I also remember Gizelle making fun of Karen and Ray going through tax issues and made a T-shirt about it. Is that the stereotype that we’re supposed to be raising? She tears down other Black women all the time. She disrespects other Black women’s businesses. When it comes to stereotypes, nobody on this show can ever throw a stone and try to act like they just failed the whole Black race. When it comes to stereotypes, what hurts a community is when you do something and you can’t come back and address what you’ve done and try to correct it and move forward. Gizelle has constantly done the same thing over and over again to the ladies on this show. Until she becomes a happy person and loves herself, she’s going to be the one who keeps causing the stereotypes to be what it is.”

On the TV moment that made her cringe

“There are going to be a lot of cringe-worthy moments in season 5, but I think what made me cringe the most was definitely the umbrella moment. My mindset in that moment when I left, I was trying to get away because I felt myself getting to the point where I was about to see red. I was so pissed. I tried to leave, so I can take myself out of that environment. I had no idea that Karen kicked the rest of the ladies out. When they came out of the door after me, I was thinking, ‘Here they go, trying to start stuff.’ I was in 100 percent defense mode. That whole scene escalated so much off a misunderstanding, off of me thinking they came outside to antagonize me, which was kind of borderline true. Because they did come outside and they did gang up in that situation. Had I known Karen kicked everybody out, I probably could’ve controlled my emotions better because I would’ve realized that they didn’t come out specifically to bother me. That I did not realize until I watched the episode.” 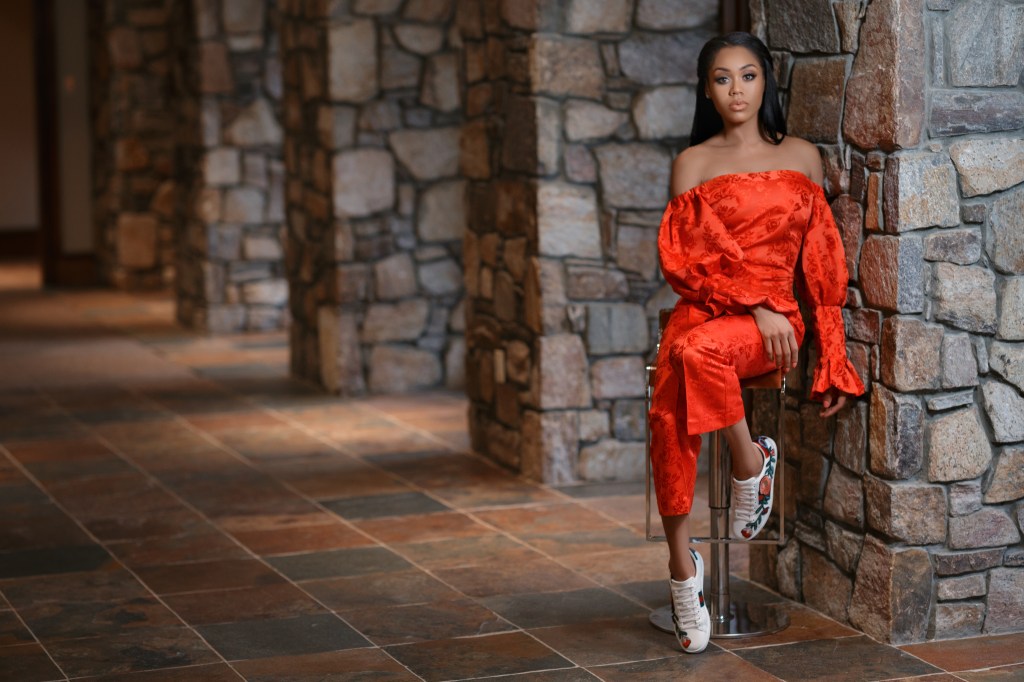 “There are so many really cute moments with me, my husband and the kids that I wish would air. Our bedtime routines are just hilarious. My kids take turns saying prayers and some of the things that they pray about are so funny. We just have some really good family moments.”

“I’ll drag you, pregnant and all. Or they just come up to me and they say, ‘Drag me, Monique!’ That’s another reason why I titled the song that way. Apparently, that’s what people think of when they see me. The other one is they like seeing me as a mom with my kids and as a wife with my husband.”

“I did not realize that it was a 24/7, 12-month job. I thought it was just, ‘OK. We’re going to film, and then I’m off for the rest of the year.’ No. It’s never-ending. Whenever I’m talking to my friends and close family, when I tell them, I’m exhausted or I’m tired, they think because the show isn’t airing that I’m sitting around with nothing to do.”