If you’ve watched the new season, you may have questions about what happened to Monica Aldama and La’Darius Marshall on Cheer season 2 and where they are now after La’Darius accused Monica and Navarro College of “physical and mental abuse.”

Monica is the head cheerleading coach of the Navarro College Bulldogs, a cheerleading team at Navarro College in Corsicana, Texas, that La’Darius was a member on. Both Monica and La’Darius were featured on season 1 of Cheer, Netflix’s docuseries about the team and their road to the 2019 National Cheerleaders Association Championships in Daytona Beach, Florida, which they placed first in in their division. Cheer season 2, which premiered on Netflix on January 12, 2022, saw Monica and La’Darius’ relationship after time on Dancing With the Stars season 29 and accusations from La’Darius that Navarro College was abusive.

So what happened between Monica Aldama and La’Darius Marshall on Cheer season 2? Read on for where Monica and La’Darius are now and the drama the series didn’t show between them.

What happened with Monica Aldama and La’Darius Marshall?

What happened between Monica Aldama and La’Darius Marshall from Cheer? In episode 6 of Cheer season 2, La’Darius revealed that his drama with Monica started when she was a contestant on Dancing With the Stars season 29 in Los Angeles from September to October 2020. While she was in L.A., Monica had an assistant coach Kailee Peppers, who once cheered with La’Darius, in her place. During the episode, La’Darius claimed that he had called Monica several times while she was in L.A. because he was unsatisfied with Kailee as his coach, but his calls went unanswered. When she returned, La’Darius noted a change in Monica. “When she came back from Dancing With the Stars, it was almost like she forgot where she came from,” he said. The moment led La’Darius to quit Navarro College’s cheer team after he reevaluated his time with Monica and the times he’s been “yelled at” by her and told he was a “bad apple,” which made him feel like he was “taken for granted.” “Monica, her favorite line is: ‘Be accountable for your actions.’ It’s her turn to be held accountable,” he said.

During an Instagram Live at the time, La’Darius also slammed Monica for wanting to be a “celebrity.” “Let’s get into it. Since we’re being honest and open and you want to be a celebrity, Monica, and you want to go on Dancing With the Stars, let’s make you even more of a star. Let’s show them how infamous you really are,” he said. “I forgot I had a voice now. You can’t shut me down no more….Now I wanna see you lie. Cause you’re a Christian woman, right? Let’s see you lie in front of the world. I bet she can do it. She been doing it.”

Monica, for her part, claimed that her and La’Darius’ feud started due to his drama with Kailee over a dog while she was gone. Kailee told producers that La’Darius had two dogs and gave one to her to adopt. La’Darius, however, claimed that he just let her watch the dog until the end of the semester, which is when she would give the dog back. When Kailee wouldn’t return the dog, she said that La’Darius threatened her at her home and threatened to kick down her door if she didn’t give back the dog. La’Darius, for his part, claimed that he just knocked three times and never threatened to hurt her. Other members of the cheer team also alleged that La’Darius tried to get Kailee fired due to his past drama with her when they were teammates and ill will toward her now that she was his coach. 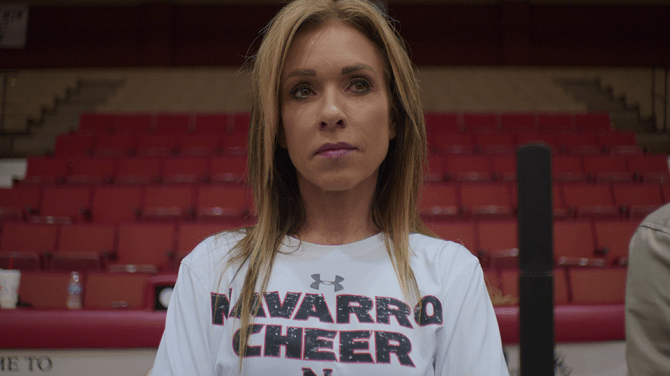 Monica told producers that she had “no idea” why La’Darius had so much beef with her and was “caught by surprise” by his posts. During the episode, Monica criticized La’Darius for attending a cheer competition in his Navarro College uniform even though he wasn’t a part of the team anymore. “Can we do something about that? You’re trying to ruin our name, but you don’t hate it that bad that you’re trying to represent us?” Monica said. “I’ve been really hurt over this because I’ve gone above and beyond for this kid. I’ve done more for him than probably anyone at this program that’s ever come through because I was determined the boy was going to graduate. He came to my family’s house for Thanksgiving when he had nowhere to go. I paid his dorm deposit. I’ve literally done everything in the world for this kid. Never raised my voice at him. Yet you’re going to slander my name? I don’t get it. I take it very personal.” Monica went on to tell producers that she hoped she and La’Darius could “mend” their “relationship,” while La’Darius explained that he once saw Monica as a mother but no longer does because she “wasn’t there” for him when he needed her.

After he quit, La’Darius went on to slam Monica on social media. “Quitting was better than walking blindly following the corrupt leaders!” he tweeted in February 2021. During an Instagram Q&A in 2021, La’Darius was asked what his “biggest regret” was to which he responded, “Not showing how sad I was on ‘CHEER’ not taking time to heal myself from the death of my uncle, the mental abuse Dailey from my coaches and peers when the cameras stepped away.I regret not standing up and tell the world the truth then!’ He also responded to a question from a user who asked if they had a “chance at making mat at Navarro.” La’Darius responded, “It’s not even Navarro anymore, it’s just a TV show of a college. Navarro stopped existing after 2019. All of them have lost their way and their Grit. You can be an actor tho like the rest but that’s about it!”

In another Instagram answer, La’Darius revealed that he no plans to “rebuild” his “relationship” with Monica. He wrote, “No, she and the rest of her crew were bullies and never deserved my hard work and determination. She chose her route she must stand on it!” He also claimed that Cheer didn’t show an accurate side of Navarro College. “Not at all, you saw the covered up part. But you didn’t see all the bullies in it. You didn’t see all the toxic ones and they were hidden in plain sight.” La’Darius, who said that experienced “mental and physical abuse” while at Navarro College, also compared the sport to the abusive history in gymnastics. “It’s worse, the things these coaches and higher up people cover up is cray. They sweep a lot of things under the rug!” he wrote.

Where are Monica Aldama and La’Darius Marshall now? 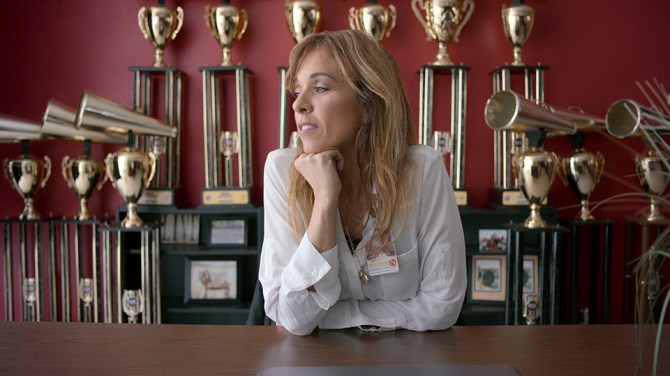 Where are Monica Aldama and La’Darius Marshall now? In the Cheer season 2 finale, Monica and La’Darius reconciled after the Navarro College Bulldogs placed second at the National Cheerleaders Association Championships in Daytona Beach, Florida, after their rival, Trinity Valley College. During the episode, Monica told La’Darius about how sad their feud has made her. “Honestly, I wake up sad every single day. I have this big hole in my heart and it won’t go away and that’s why I wanted to talk to you,” she told La’Darius in her hotel room. “I feel like you’re my child to me. It just really hurt. Do you really think I was abusive to you? That broke my heart apart.” La’Darius responded, “When I think of our relationship, I see you how you see me. I see you as my mom. I know we’re closer than that. Throughout this past year, I feel like you lost sight of that. Do I believe you’re abusive? No.” La’Darius went on to break down in tears over what Monica has done for him. “I feel like you were not hearing me. I was like, ‘Monica, you have to listen to me.’ I promise. I would never lie to you.” He continued, “I don’t want war with you or anyone. I chose to forgive. even though what I did was way harsher, I hope you choose to forgive me.” Monica told La’Darius that she also forgave him. He added, “I don’t want bad blood between me and you. When it boils down to it, it doesn’t have to do with me and you.” The scene ended with La’Darius and Monica hugging.

As of January 2022, La’Darius and Monica still seem to be good. Both of them follow each other on Instagram, and La’Darius has posted several Instagram posts promoting Cheer season 2, despite the negative things he’s said about the show the year prior. “Catch it on Netflix :Season 2 coming soon : January 12th 2022 #seasonTwoCheer #CheerRivals #Cheer,” La’Darius captioned a photo of the Cheer season 2 poster in December 2021. 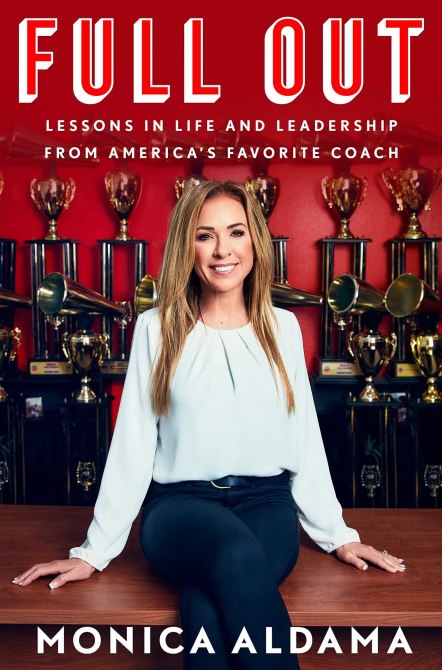 For more about Cheer and Monica Aldama, read her 2022 memoir, Full Out: Lessons in Life and Leadership from America’s Favorite Coach. In the book, Monica, who has been referred to as the “Bill Belichick of cheerleading” by New York Magazine, shares her secret to how she built one of the most successful cheerleading programs in the country: Navarro Cheer. The memoir also includes never-before-told stories about Aldama’s life, from her divorce and remarriage with her current husband to the challenges she faced as a young mother and how she overcame it all to become the breakout star of Cheer and a finalist on Dancing With the Stars. The book also includes never-before-told, behind-the-scenes moments from cheer, as well as the cheer principles Aldama follows in her everyday life. Full Out: Lessons in life and Leadership from America’s Favorite Coach is a must-read for Cheer fans.