Fans of Darren Star’s Younger can rejoice because season six of the hit TV Land show returns tonight, June 12. Ahead of the premiere, we talked all things Younger with actress Molly Bernard—what Season 6 holds for her character, Lauren Heller, which characters may be rekindling an on-screen romance, and what it’s like behind-the-scenes with the cast (and yes—the whole cast in super tight IRL).

Bernard was originally supposed to be a supporting, recurring character on Younger. She appeared in Season 1 as Kelsey’s (Hilary Duff) best friend. But in Season 2, Bernard was quickly promoted to series regular—the dream for most actors—and her charmingly neurotic, loveably driven character became an integral member of the show’s ensemble cast. As far as what fans can expect from this season…Bernard says nearly every episode ends on a cliffhanger. “Our show typically ends on a cliffhanger every season,” she explained, with the finale leaving fans questioning everything. “I feel like in this season, every episode ends on a cliffhanger,” she continued, “so fans are really going to go wild.”  She also teased a very exciting moment that is sure to have fan’s heads spinning: “There’s a moment this season that die-hard fans of Younger will be very happy about: a possible rekindling”…UM. Who is getting back together?! *Takes a few deep breaths* 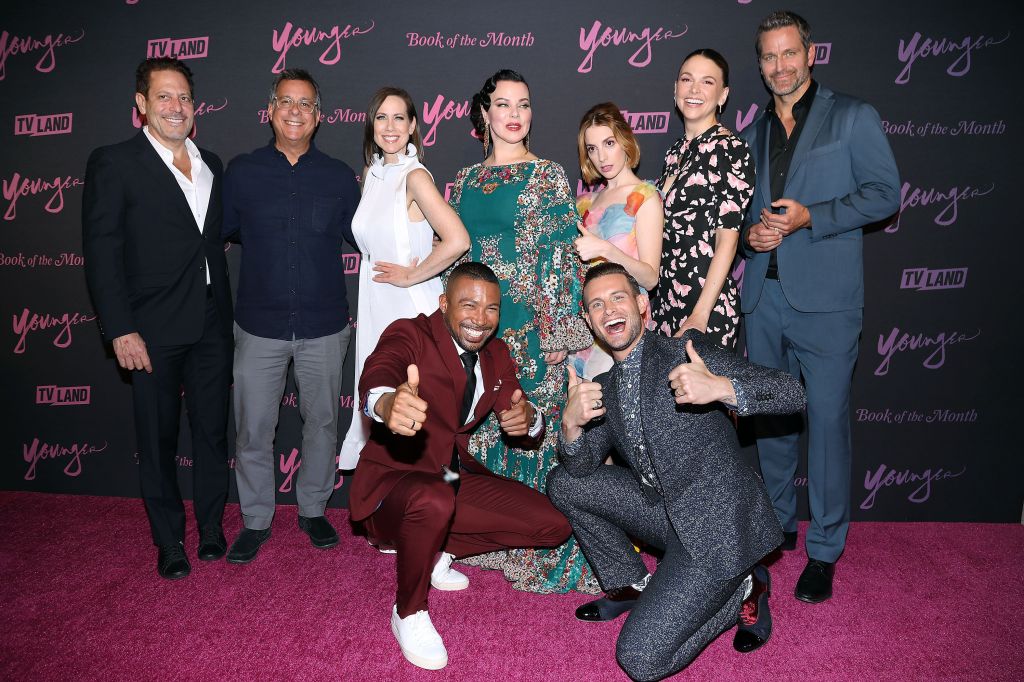 Bernard went on to explain that the cast has just as much fun off-screen as they do on-screen. “The dynamic on set—it’s goofy and it’s also very focused, because we’re all very serious about getting out on time, and doing the best work that we possibly can,” she said. “It’s really amazing. We all actually love each other. Every day I go to work, I’m excited.” Bernard went on to explain that working with Sutton Foster, who plays Younger’s protagonist, Liza, has been a dream. “Sutton Foster is someone that I’ve idolized since I was a teenager, so I still have to pinch myself.”

“I still get tongue-tied constantly around her,” Bernard adorably admitted. “I also feel like we have a friendship that we both care about. She’s so lovely to me, and she’s such a star. She really knows how to lead our show. It takes a lot to be the lead of a show. It’s a lot of energy. It’s a lot of maintaining your feelings and staying focused, and long, long hours. She does it with such grace, so she’s like a constant inspiration.”

As far as the rest of the cast? Well, Hilary Duff and Bernard feel extremely lucky that the show brought them together. The two women play best friends and roommates in Younger, which isn’t very far from their relationship in real life. “Hilary has become one of my best friends. I feel very lucky that we get to work together because those days are just a delight,” Bernard exclaimed. 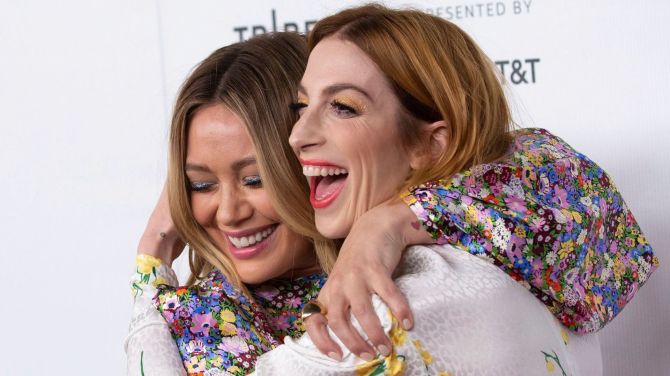 She also just became godmother to Duff’s daughter, Banks. On March 26, Bernard shared this sweet shot with Banks, writing, “love this little love oh so much I want to put sea salt on her nose and get my nibble on @hilaryduff@matthewkoma.”

In addition to the cast’s close relationships, Younger’s fans are very devoted and Bernard believes the show resonates because ladies are in the lead. “I feel like fans love that it’s female-driven, that it’s a very good-hearted show,” she explained. “The female relationships take precedence over everything else. It’s 22 minutes, so it’s like this little treat. It’s very digestible. We stay very present. The writers work very hard to keep the zeitgeist in the writers’ room. We’re always very current. Also, it’s good TV. It’s Darren Star. He’s a hitmaker.”

Bernard also believes her character, Lauren, is one that TV has been needing for a long time. Lauren is a confident, successful, engaging woman who also happens to be pansexual. But her sexuality is not what defines her, Bernard says. Her storyline isn’t about a woman struggling with her sexuality, it’s simply a part of who she is. The reminders that Lauren is sexually fluid are intentionally very subtle because it’s only one aspect of her incredible person. Bernard says Lauren’s sexuality was something she and the writers discovered along the way. “It wasn’t something that I knew going into the pilot or even the first couple of episodes,” she explained. “Once it became clear that Lauren was this very vibrant pansexual being, it all dropped in and made sense.” She continued, “It’s not the story of a pansexual/bisexual woman who’s struggling. There are a few important scenes, well, one in particular with her mother, played by Kathy Najimy, where she’s just like, “Oh, yeah. She’s pan. She’s great. She’s my daughter.” It’s like Lauren’s community really loves her, so the focus is actually not on Lauren’s sexuality. It’s really on her boldness in the world, and her size, that she dominates.”

Bernard went on to say that she’s received very positive responses to her character from the queer community. “It’s a real privilege that I get to play her,” the 31-year-old actress said.

“[I learn something from Lauren] every day” she continued.  “I feel like Lauren has taught me a lot about confidence and supporting. Especially this season, she goes above and beyond to support her friends. This is her selfless season. In the past, she’s poisoned her friends. In the first season, [she] drugged everyone. She gave them molly at her birthday party. She’s grown up a little bit. She’s so cool. I’m always learning from her about boldness and hunger.”

Bernard went on to explain that she always knew she wanted to be an actress, something she recognizes as a true gift. The Chicago Med actress just wrapped a new independent film, Milkwater, which she says was a huge learning experience. “It’s my first time leading a project, so thank goodness that I had Sutton Foster as a guideline,” she reflected. “She really set a really high bar for me. It’s my first lead in an independent feature.”

“It’s a beautiful independent film about a struggling, lost millennial,” she revealed. “She’s 28. She doesn’t know what she’s doing with her life…She’s a boundary-less person, and she attempts to set some boundaries and it doesn’t go over so well. There’s also really amazing queer representation in the film. My character’s name is Milo and all of her friends are queer, and no one bats an eye. It’s a really beautiful story about what is to be a millennial, and the nature of failing when you’re young, and how you’re really looking for a connection.”

Also, in case you needed another reason to love Molly Bernard, please watch this epic lip sync battle. She faced off against co-star Nico Tortorella (who, according to Bernard, is definitely the goofiest on the set of Younger). And guess what Bernard decided to do for her number? “Don’t Rain on My Parade.” Dressed as Ruth Bader Ginsburg.”I just was like, ‘This is what I have to do,'” she remembered. “I think I must do “Don’t Rain on My Parade”, and it’s got to be RBG. Ruth is up against all of Washington, and she’s ready to sock it to them and become the star that she is, that she’s always been.”

Younger premieres its 12-episode sixth season on June 12 at 10 p.m. on TV Land. Tune in tonight!