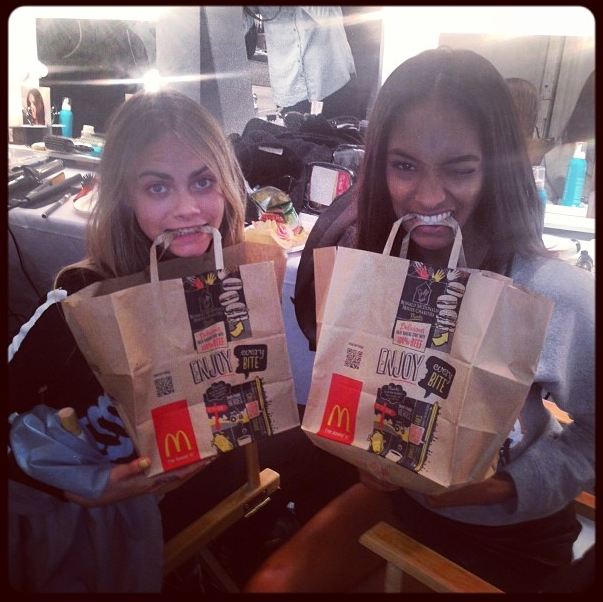 File this one away under we’re skeptical: It-models Cara Delevingne and Joan Smalls apparently decided to feast on bags of McDonald’s food during London Fashion Week, if Cara’s recent Instagram photo is to be believed. The two beauties posed backstage at a show toting two rather large bags of fast food with their teeth, clearly eager to take a big ol’ bite out of their meals.

While, in some ways, it’s kind of refreshing to see that even models as well-known as Smalls and Delevingne actually do eat during Fashion Week (or at all, really), we kind of have to wonder if it’s for real.

As outspoken street style photographer Garance Doré pointed out recently on her blog, it’s definitely questionable and off-putting when super-skinny women tout their unhealthy eating habits because  it presents a pretty unrealistic image of how incredibly thin people really eat.

“If the girls on “Sex and the City” or “Bridesmaids” or any other movie/TV show/magazine really spent their time eating like they did on the screen, they’d look more like Lena Dunham than Carrie Bradshaw,” Doré wrote. Predictably,   received a fair amount of backlash, but she has a point: it’s not like Cara or Joan take to scarfing down quarter pounders on a regular basis. So why do they feel the need to share it when they do eat such foods?

MORE: Why Was Cara Absent From NYFW? We Ponder the Topic