It’s been eight years since Mindy Kaling played Kelly Kapoor on The Office, but she’s still stopped at the airport by teenagers who want to talk to her about the show. “I’m surprised and delighted at how everytime I go through the airport, how many 15-year-olds come up to me like, ‘Kelly! Kelly!’” she tells StyleCaster. “It’s been great that the show has had this lasting power. People who were basically born when the show premiered, they’re still into it now.”

Kaling, 42, starred on The Office for all nine seasons from 2005 to 2013. She was also a writer, executive producer and director on the show. As for the chance of an Office reboot, Kaling reveals that she would consider revival only if producer Greg Daniels, who adapted the American version of The Office from the original BBC series, was a part of the reboot.

“iIf Greg Daniels was in charge of it, I would be excited and supportive and try to help in any way I could,” Kaling says. “It had to be the right person steering the ship, but if it was Greg, who was the mastermind of the American Office, it would be a great show.”

While Kaling’s kids—Katherine, 3, and Spencer, 11 months—haven’t watched The Office (“I would love for them to see The Office when they’re old enough”), they have seen her in Disney+’s Monsters Inc. TV spinoff, Monsters at Work, which they’re big fans of.

“I play this Monster called Val Little. My daughter is obsessed with it. She loves that I’m in it. It’s the coolest thing about me,” Kaling says. “She just loves the show. That’s really fun. Between The Office and The Mindy Project, she’s a little too young to enjoy all these things, so I do love that she’s into Monsters at Work.”

As for when she was a kid, Kaling’s hobby was pen pals, a passtime she’s continued with T.J.Maxx’s Change Exchange, a campaign designed to help women connect with each other through moments of change. The program, which is a part of the brand’s The Maxx You Project and provides participants with their own stationary kits, matches women with pen pals across the world to exchange letters with. “I’ve felt so isolated for the past two years, and when I was younger, I loved pen pals,” Kaling says. “I have my own pen pal. Her name is Jaleesa. She’s an extraordinary woman. I want to encourage other women to reach out and get resources themselves.”

Ahead, Kaling talked to StyleCaster about her plans for Never Have I Ever season 3, whether she would ever be in the show and playing a South Asian Velma in HBO Max’s upcoming Scooby Doo spinoff. 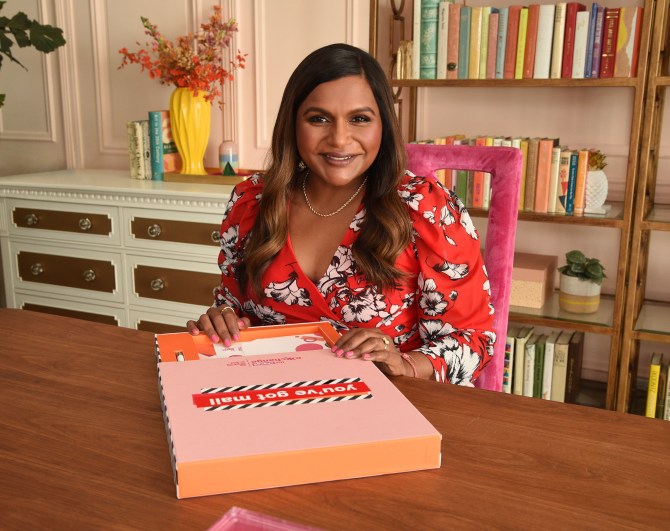 On Never Have I Ever season 3

“I feel really positive about season 3. We love our partnership with Netflix, and we love that both seasons of the show have been number one around the world. That’s so exciting, particularly because the show is about what I thought was a specific small Indian family made up of mostly women. It’s been great that it’s been number one in Brazil, number one in South Africa. I hope we get to do more seasons because I love the cast and the characters, and I love writing in this world.”

On if she would ever act in Never Have I Ever

“I would love to be in Never Have I Ever. It would have to be pretty organic for me to be in the world. You’re kind of like, ‘Hey, this is a show about an Indian family. Surely, there must be a way for me to make myself be a part of it.’ But it’s also been great just to be behind the scenes. Casting it and writing it is so rewarding in and of itself.”

On the love triangle between Devi, Paxton and Ben

“Do I have an endgame in mind? I don’t. I really do not. I think it’s great because both of  these choices are really great in their own way, but it’s been really fun seeing how passionate people are for one or the other side. It reminds me of being a teenager, and how invested you get in those fictional relationships. That makes me really happy.”

On playing a South Asian Velma

“I’ve always loved the character. I identify with her. She’s a funny, really smart, nerdy girl who is the brains of this operation, which is her little group of friends. I identify as that. It feels like she doesn’t care about fashion but is effortlessly iconic in her orange turtleneck. I thought, ‘Wouldn’t it be great to tell these stories of mystery-solving from her point of view?’ It has a little bit more of an adult edge to it. I think people are going to really like it. We love the character. We think she’s so iconic. The South Asian of it felt natural to us. If Spider-Man can be Miles Morales in the new Spider-Man animated movies, why couldn’t Velma [be South Asian]? If we keep what’s important to her alive, it shouldn’t matter what her race is.”

On the backlash to the reimagining of Velma’s race

“I’m always surprised when there is, in 2021, any kind of resistance to reimagining of classic characters, as long as her main attributes and her brilliance are the same. I’m always surprised when people can’t imagine her as being open to different ethnicities. I want to emphasize that that was an extremely small group of people. They were pretty vocal. Online anyway, a small group of upset people can seem like an army even if it’s a really small group.”

On if her kids understand her job

“I don’t think so. Definitely not my son, who’s 11 months. He has no idea at all. My daughter, I don’t think she gets it yet. I don’t know that she understands that shows are written by groups of people and that I’m one of those people. When I presented at the Oscars two years ago, I remember she was watching it on screen when I was at the Dolby Theatre. She thought they were shooting it upstairs. She was like, ‘Mom has to come downstairs.’ And it was like, ‘No, she’s not in the house right now.’”

The Office is available to stream on Peacock.