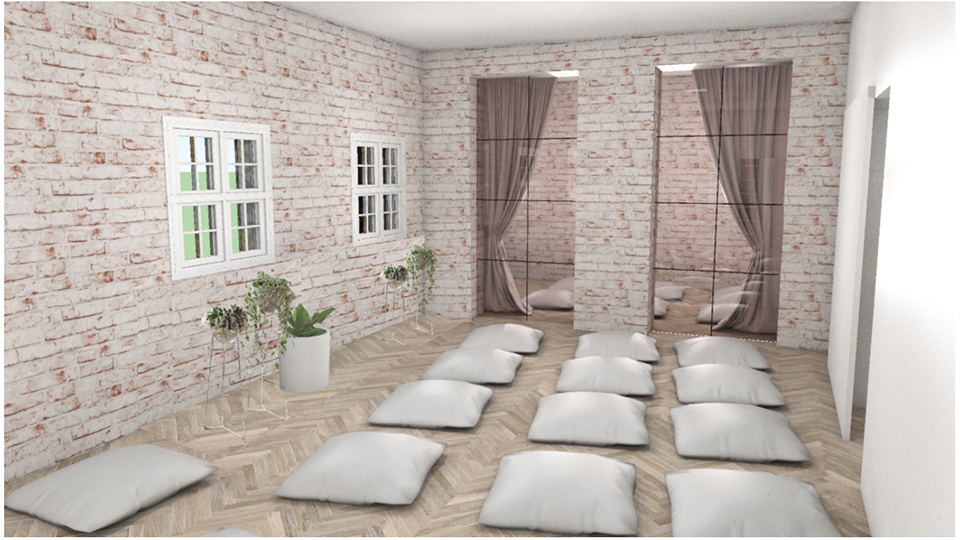 People: mindfulness meditation is a full-blown thing now. Not only have celebs like Emma Watson, Angelina Jolie, and Oprah, endorsed it, and health experts have named it the next big trend in fitness. So it seems like the practice—which is grounded in being in the present moment and connecting your mind to your body by conscious breathing and introspection—isn’t going anywhere soon.

In fact, the first-ever “mindfulness studio” recently opened in New York, purporting to be the “Drybar of meditation.” Could it help me live more in the present and learn to be happy in the moment? Of course, I had to try it out and see.

Called MNDFL, the studio—which opened in Manhattan’s West Village in November—was founded by former Hollywood exec Ellie Burrows, whose father, James Burrows, was the brains behind shows like Frasier and Will & Grace, and author Lodro Rinzler, who wrote “The Buddha Walks into a Bar.”

To Rinzler—who, no joke, is the company’s “chief spiritual officer”—the practice has been having a moment because of all the research coming out about the benefits of mindfulness. “There are a number of studies that’ve shown that simply focusing on the breath for short periods each day will lower stress levels, increase focus and memory, and boost the immune system,” he tells me. “Now it’s not just spiritual people recommending it, it’s your doctor, too.” And here I thought self-medicating with wine was the key to enlightenment.

MORE: How to De-stress in 30 Seconds or Less with Micro-Meditation

MNDFL focuses on group meditation. The class I chose to take, all about mindful breathing, had about 15 gray pillows on the sparkling birch floors. Ironically, there were extensive subway delays when I left for the studio from the office, so by the time I got there, everyone else was already 10 minutes of breathing into Nirvana, while I was a stressed-out, frazzled mess.

I sheepishly tiptoed to my own meditation tuft and started inhaling for four, exhaling for four. Our instructor, a woman who could easily get a job as an NPR reporter with her cool, calming voice, directed us to concentrate on feeling our breath—first focusing on where it enters through your nose, then to your throat, your diaphragm, your belly.

It felt relaxing, yes, but also kind of like a yoga class without any of the actual exercise benefits. Or maybe my brain was just so used to jumping from thing to thing during the day that I couldn’t just let myself be in the moment.

MORE: 20 Health Insiders Predict the Next Big Thing in Fitness

Still, I forced my mind to focus on the task at hand, and before I knew it, the teacher was ringing a large Tibetan bowl, signaling the end to the half-hour class. I felt more relaxed and a little more chill—kind of like what drinking a glass of Cabernet might do, sans the calories (or the attendant hangover the next morning). I also learned that when I’m stressed, I tend to breathe really shallowly. Breathing in for eight counts—and then out—was a stretch for me. Afterwards, I hung out in the communal area and sipped on some tea. It was surprisingly nice to be doing nothing, and I’ll definitely come back for more classes, which range from instruction on sleep to kindness (which, as a New Yorker, I probably need).

Rinzler tells me that the group setting is unique but helpful to mindfulness meditation, something I had, up until this class, simply practiced on my own.

“It’s so fucking hard to just sit in your apartment and meditate,” he tells me. “One second, you’re on your couch, and the next, you’re looking at a spot on the rug that you need to clean, and then you lose it.” He also compared meditating at home to going for a run in a swimming pool.

“You can still do it, but that’s not what the pool is designed for.” He says that it’s too early to talk expansion plans yet, saying he Burrows want to do this really well. But if the larger trend is any indicator, expect to

How to Meditate in Five Minutes
Rinzler gave me an easy meditation to practice on my own before I start my busy days that can be done before checking your email or even making your first pot of coffee every morning. So remember, breathe, relax, and stay calm.

Set a timer for five minutes. Feel the weight of your body on the earth. Lift up gently through your spine. Relax the muscles in your neck, shoulders and back.

Close your eyes or rest your gaze around three feet ahead of you on the ground. Connect fully with the natural cycle of your breath. When you drift off into thought, simply acknowledge that by gently and silently saying, “thinking” to yourself. Then return your attention to your breath. When the timer goes off, slowly transition into the rest of your day with mindfulness and awareness.”