She’s just being Miley. Miley Cyrus’ VMAs 2020 performance of “Midnight Sky” was full of throwbacks. The “Slide Away” singer performed her current single at the 37th annual MTV Video Music Awards on Sunday, August 30. The awards were held in New York City with Keke Palmer as the host. Though there was no live audience, artists performed at locations across New York City in honor of the city’s “strength” amid the current health crisis. Some of the performances were pre-recorded.

Cyrus’ VMAs performance started with her in a black dress with a high slit as she performed in an orange room, which changed colors throughout the performance. Cyrus accessorized her look with layers of jewelry, including a giant cross necklace. Midway through the performance, Cyrus ascended a flight of stairs to a disco ball. She then ripped off her skirt and climbed the disco ball, an homage to her 2013 song “Wrecking Ball.” Some fans also interpreted the staircase and blue lighting as a reference to Cyrus’ 2009 song “The Climb.”

“Midnight Sky,” which was released on August 14, is the first single from Cyrus’ upcoming album, She Is Miley Cyrus. The album was originally planned as part of a trilogy. (The first installment, She Is Coming, was released in 2019.) “Midnight Sky” debuted hours after news broke that the Cyrus had broken up with her boyfriend, Cody Simpson, after less than a year of dating. Cyrus confirmed the news in an Instagram Live at the time. “A year ago, almost to this exact date, the media tried to tell my story for me and control my narrative, and I’m just not accepting that,” she said. “So today, it came out that me and my boyfriend have broken up, it was confirmed by a ‘reliable source’ even though no one is reliable in a relationship except the two individuals that are participating in it.” 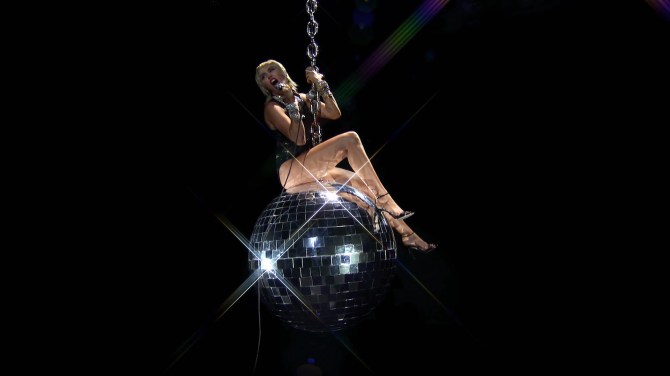 She continued, “But, for right now, two halves can’t make a whole and we’re individually just working on ourselves to become the people that we wanna b. Like everybody else at this age, we’re just deciding who we wanna be with our lives, what we wanna do with our lives. And so, don’t make it some drama story if next week we’re out hanging out or getting pizza. We’ve been friends for 10 years and we’re gonna continue to be friends.”

In an interview with Apple Music’s “New Music Daily” after the release of “Midnight Sky,” Cyrus explained that the song was a way for her to reclaim her narrative after her divorce from Liam Hemsworth in 2019. Hemsworth and Cyrus—who met on the set of The Last Song in 2009 and married in December 2018 after almost a decade of on-again, off-again dating—announced their separation in August 2019. In her interview with Apple Music, Cyrus explained that “Midnight Sky” was her way of telling her side of the split.

“Talking about ‘Midnight Sky,’ specifically, I felt like my story and my narrative had kind of been told for me over the past year,” she said. “Obviously, I went through an extremely public breakup and, even more than that, a divorce, and with someone that I had been with for 10 years. That narrative and that experience of 10 years was told for me by one day from the eyes of a helicopter.”

She continued, “I felt kind of villainized. I also felt like I kind of shut down, because it was kind of, respectfully, below me to engage with the press and the media at that time. It felt like I would rather be able to articulate this experience in a poetic way that also I can put back into my art. I never really have engaged. I’ve only played with the public and the perception in that way.”