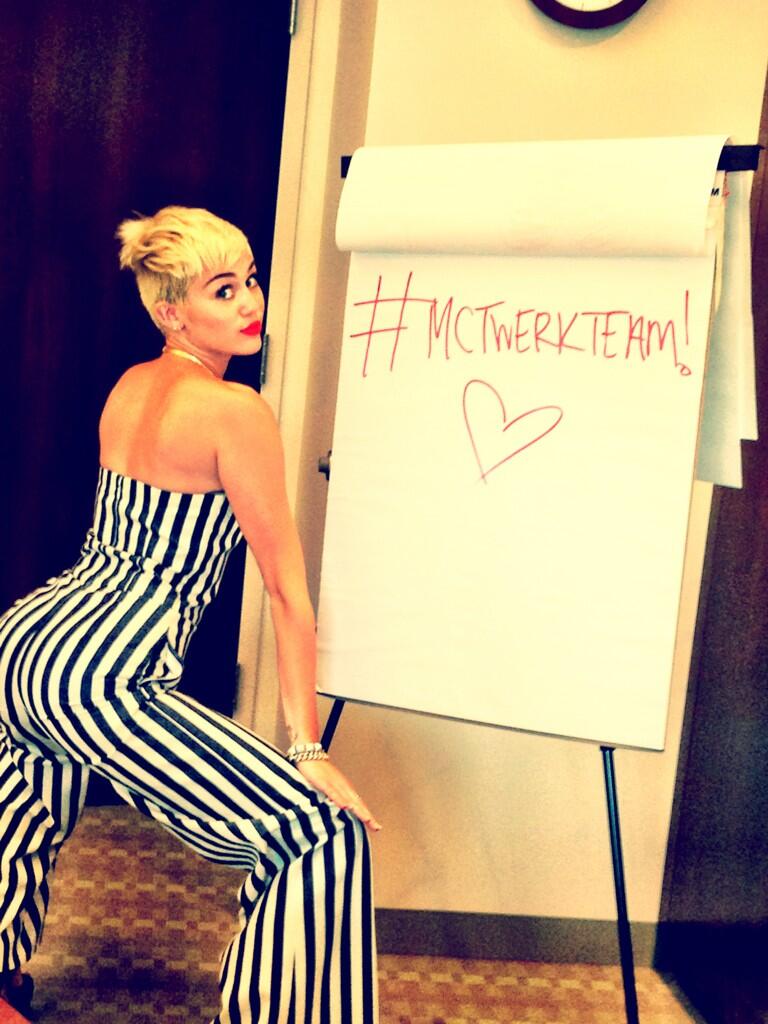 Last week, one of the most buzzed-about celebrity stories was Miley Cyrus‘ alleged split from fiance Liam Hemsworth (which has yet to be confirmed, FYI). A week later, and boom—everyone seems to have forgotten. The reason? Miley’s “unicorn twerking” video released late Wednesday night. Below, we break down what the video means, why we think it went viral, and whether the 20-year-old is looking to go hip-hop.

Firstly, what is twerking? In case you’re unfamiliar with the term, “twerking” can be defined in various ways. According to Urban Dictionary, it’s “The rhythmic gyrating of the lower fleshy extremities in a lascivious manner with the intent to elicit sexual arousal or laughter in ones intended audience,” or “to work one’s body, as in dancing, especially the rear end.” And that’s exactly what she does. The urban style of dance, often attributed to strippers, may seem like a weird obsession for the Nashville native who first found fame thanks to her Disney Channel show “Hannah Montana.” However, it seems her fascination with this culture is nothing new. A lover of rap music, for her birthday last year she requested her friends get her a “big booty hoe,” a nod to rapper 2 Chainz‘ hit “Birthday Song.” They obliged, and she tweeted photos of herself with a nearly-nude stripper.

She’s clearly plugged into hip-hop culture (and it seems to like her, too!):  As mentioned above, twerking has an emphasis on one’s backside. Miley clearly prides herself on being well-endowed in that area, as her Twitter bio is “im a dime. best top of the line. cute face slim waist with a BIG behind,” a lyric from rapper Mike Jones‘ song “I Need A Dime.” Listening to hip-hop has had a clear influence on her music and she’s clearly plugged in, as today she announced on Ryan Seacrest‘s radio show that her upcoming album features an unlikely collaborator: Snoop Dogg (now known as Snoop Lion, in case you didn’t know.)

While the music has yet to be released, crossing over into the hip-hop realm is sure to have a positive outcome for her. She already seems to be accepted by some of the industry’s most powerful players. She’s recently been tweeting with Pharrell Williams, who’s producing some of her new tracks. Additionally, right after her twerking video exploded, Mack Maine, President of Young Money Entertainment, tweeted, “So NOW everybody understands my love for Miley!!! Back off suckers!!!! She’s mine!!!! #MackieRayCyrus.”

Her style has serious shades of hip-hop: As Miley moved away from her vanilla pop-star image, her style has evolved as well. Besides the platinum dye job and short locks (courtesy of Chris McMillan, the man behind “The Rachel”), she’s embraced some of hip-hop’s favorite fashion trends: Enormous gold hoop earrings, chains galore, and crop top ensembles that you’d expect to see on Azealia Banks. While she looks adorable no matter how she dresses, her latest looks make way bigger statements than her previous fashion sense.

She’s got a thing for creating viral videos: Being part of today’s young generation of celebrities, Cyrus has always had social media savvy and uses the Internet to connect with her fans. She first made waves on YouTube thanks to a web show with her friend Mandy Jiroux (the duo even released a heavily-choreographed reenactment of Madonna and Justin Timberlake‘s “4 Minutes” music video in 2008). So, it’s no surprise that she continues to employ home videos as a means of getting attention—or in the case of her twerking video, as a means of having people forget about her much-publicized relationship drama.

Whether Miley’s just going through a phase or she’s truly trying to integrate herself into into hip-hop culture is yet to be decided, but the twerking video makes perfect sense for the starlet, who’s clearly looking to deflect attention from her personal life while gaining some serious street cred. We’re totally eager to see what’s next for the unpredictable starlet!

Watch the “unicorn twerking” video below and let us know your thoughts on her image makeover!