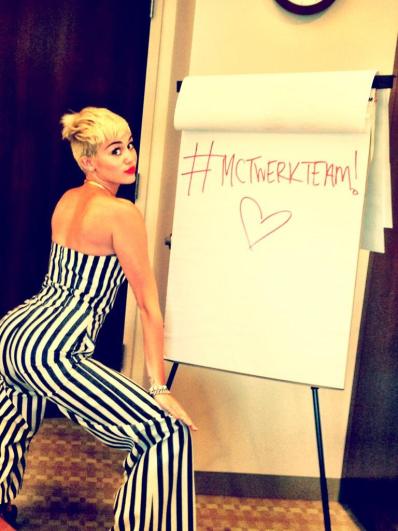 It’s difficult for celebrities to change their public identities, especially if they are strongly associated with a certain world. Case in point: Kim Kardashian, who’s desperately tried to downplay her sex tape and reality show roots as she continues to rise in the high-fashion world thanks to her new baby daddy and industry fixture Kanye West. While Kardashian has achieved considerable success (she was able to attend the Met Gala, and Anna Wintour reportedly had a hand in naming her daughter North), she obviously still has hoards of haters who’ll never let her leave her past in the past. But Miley Cyrus is another story.

The 20-year-old singer evolved from a Disney starlet to a twerking hip-hop loving party girl seemingly overnight, and seems to have been fully embraced in the process. While an outrageously wealthy former child star doesn’t exactly seem like the type that rappers like Snoop Lion, Juicy J, and Wiz Khalifa would warm up to, everyone’s loving Cyrus’ carefully sculpted new image.

Standout lyrics include, “Freaky b—es shakin ass on the pole. do the Miley Cyrus b—h and get low,” and “With her camel toe she steal the show.” Vulgar? Yes, pretty much—but she isn’t likely to take offense to any of it especially because she’s blatantly taking a cue from the Rihanna playbook and letting the public know that she’s open about her sexuality, and even into stereotypically male hobbies like going to strip clubs. In fact, for her birthday this past year, she was joined for the party by a voluptuous stripper. How many of you spent your 20th birthday like that?

While not everyone is ready to accept Cyrus’ rapidly developing persona, it’s clearly working. Her recently released single “We Can’t Stop” is a success (and the video is insane), and this Ying Yang Twins song is likely to put them on the map once again, proving that her star power is higher than ever before.

Listen to the absurd song below and let us know your thoughts!