Am I the only one who didn’t realize Miley Cyrus would be a part of this year’s Super Bowl events? Unbeknownst to me, Miley Cyrus was the face of Super Bowl LV’s TikTok Tailgate—and ever one to impress, our girl showed up and showed out. What a fun game day treat, am I right? Yay sports!

If you’re not a TikTok addict just yet, you may not have even known this was a thing, but a two-hour TikTok Tailgate was broadcast live from Tampa Bay at 2:30p.m. EST on the NFL’s TikTok account, as well as partially aired on CBS’s Super Bowl LV Pregame Show. The highlight of the event was a performance by Ms. Cyrus, but the fans in the stands were the ones who really deserved the applause. The singer’s audience was made up of vaccinated Florida health care workers, who hopefully enjoyed their well-earned day off work.

Cyrus’s concert wasn’t the only fun event during the tailgate—there were other special guests, cooking segments and surprise performances, too. That said, Miley still showed up looking bomb and I’m here to gas up her look. The songstress and trendsetter looked stunning in a black and hot pink halter crop top with a competitive cheerleading-inspired neckline (Don’t ask me how I know that. *Shudders in cheer past life*). Someone cast her in a new Bring It On film immediately! 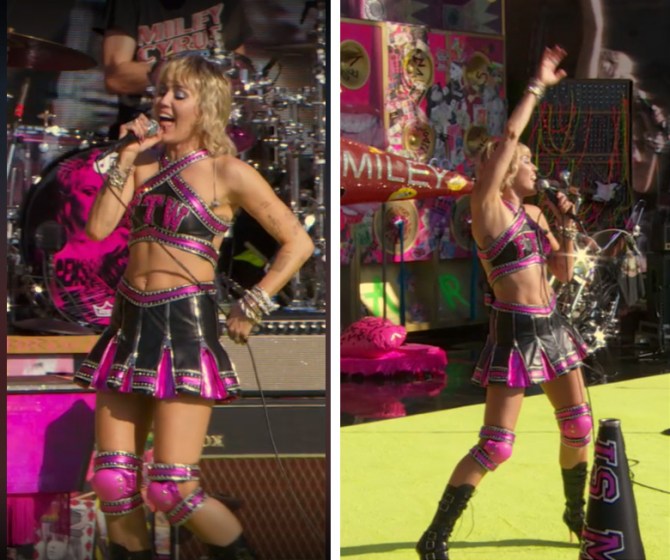 She paired the top, which said “FTW” (For The Win!) with a matching cheer skirt, knee pads and some badass vintage Dior boots. As for her glam, Cyrus rocked silver eyeshadow, and her strands were in her now-signature shaggy bleach blonde mullet. Oh, and if you haven’t seen her special game day nails complete with black and pink polish, gold embellishments and heart-shaped cutouts, you’re really missing out.

Oh, and let’s not forget the fact that she changed into an ultra-sparkly sequined black and pink jersey with white football pants to perform a song alongside the one, the only, JOAN JETT!!! “It’s not a costume, it’s custom,” Cyrus said of her Gucci ‘fit, and I swear it’s a line I’ll now be quoting on the reg. 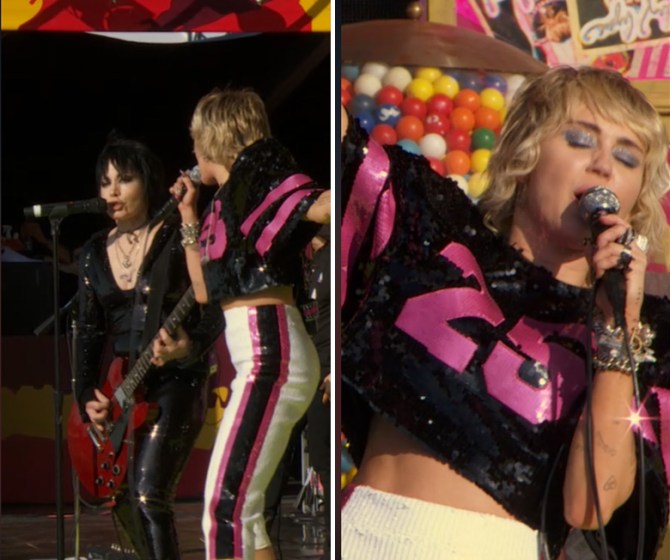 Prior to the event, Cyrus served two additional cute looks. In promo shots hyping it up, she stunned in a black and pink long-sleeved latex sports-jersey-bodysuit hybrid, aka everything we never knew we needed. Speaking of, does anyone know the singer’s ties to the number 96? This isn’t the first time she’s worn a jersey bearing the number.

Just hours before the show aired, Cyrus posted in a more casual ‘fit for soundcheck, including denim short-shorts and an oversized green tee with “#1921” on the front and “Blind For Love” on the back, both by Gucci, plus striping on the sleeves for that ~sporty touch~. That said, she did glam it up with some vintage Dior stiletto boots.

If I’m honest, I’m not all that interested in the actual game, so the TikTok Tailgate was probably my favorite part of the day—although I’m a sucker for a good halftime show and an even better bowl of my dad’s homemade chili. Still, shout out to TikTok and the NFL for giving health care workers a fun, well-deserved experience on game day. And props to Miley for looking fierce as usual! We love to see it.