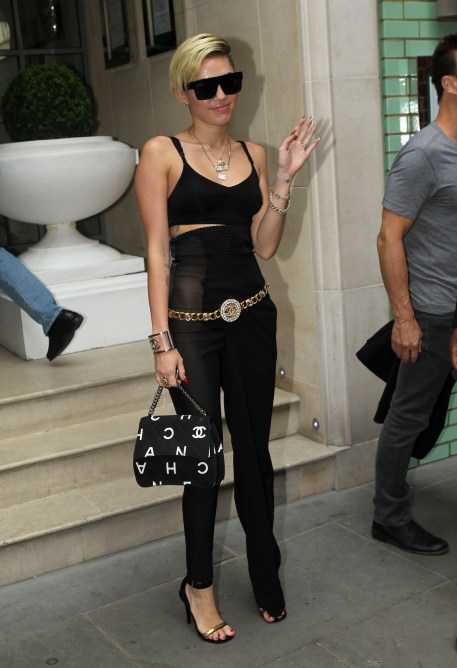 Does Miley Cyrus ever have an off day? She came into London like a wrecking ball this week, and since the 20-year-old pop star has touched down across the pond, it’s been a nonstop fashion show of wild looks. The latest is yesterday’s ensemble, which consists of a pair of Jean Paul Gaultier pants, which are half loose trousers, and then half sheer and tight leggings. She paired them with a black bra, and accessorized with more Chanel than most Neiman Marcus stores.

This isn’t the first time that Cyrus has gone for the “half and half” pant look—back in July, she baffled everyone when she hit a red carpet in a black bustier and a pair of half jeans, half sweatpants. Clearly, the twerking former Disney starlet is trying to make this a trend—and we honestly wouldn’t be surprised if it caught on.

Hopefully though, imitators of this ensemble will opt to wear underwear—something which she failed to do. Hey, she’s got to do something to keep up with the perpetually braless Rihanna! Although it’s obviously an out there look that many would be unable to pull off, we actually think she looks pretty chic—especially considering we’ve mostly seen her completely naked this week. And, given the staggering amount of sheer pieces with no bra we’ve seen on the runways at New York Fashion Week, she’s bang on trend.

What do you think of this look—is it ridiculous, or ridiculously chic?