It’s no secret that Taylor Swift has a long list of celebrity enemies: Kim Kardashian, Kanye West, Katy Perry, etc. But while we were busy paying attention to the latest Kimye drama (ICYMI, Swift shaded Kardashian by wearing a snake outfit and declaring National Snake Day her “favorite day.”), we completely ignored another feud that might’ve been brewing beneath the surface: her drama with Miley Cyrus.

Though Cyrus has shaded Swift in the past, her most recent diss came on Saturday when she liked an Instagram video criticizing the “Look What You Made Me Do” singer’s career. The video was a reaction to a New York Post article claiming that “everything” Britney Spears did, Swift did better. In response to the article (because no one can live up to Britney), one fan edited together a video of celebrities, including Demi Lovato and Lady Gaga, laughing to suggest that they were laughing at the headline.

Soon after, the video also earned a like from Cyrus, who was accused of shading Swift by supporting a video that mocked her career. After the like, many of Swift’s fans came for Cyrus, criticizing her for dragging the “Delicate” singer seemingly out of nowhere. 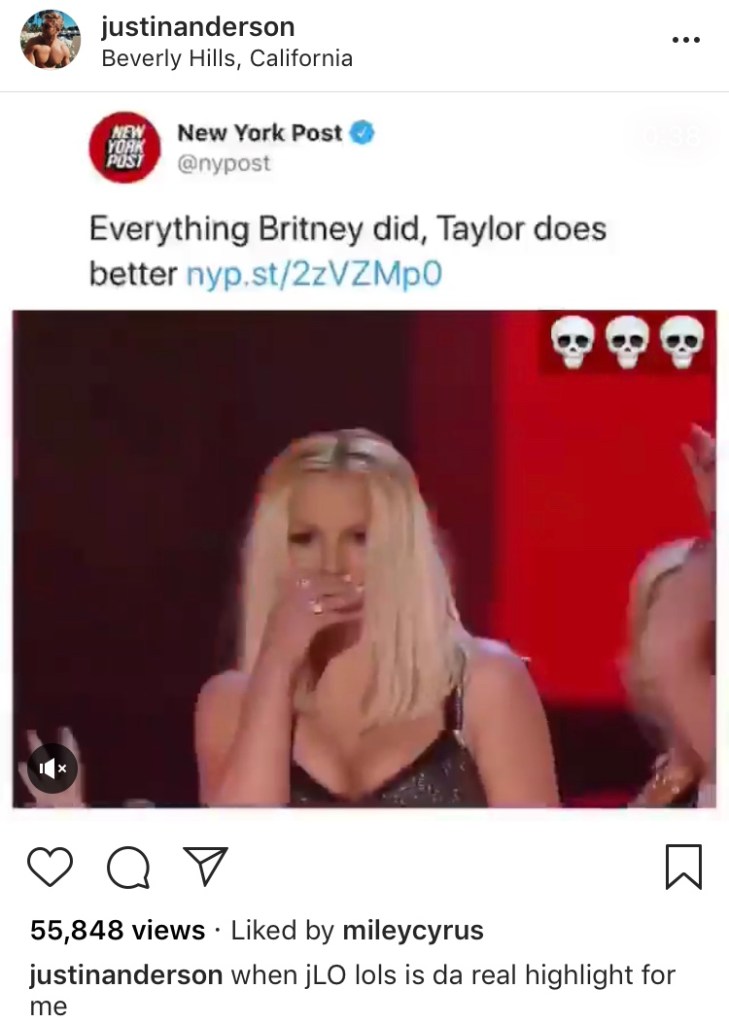 This isn’t the first time that Cyrus has shaded Swift who starred and sang a song in Cyrus’s 2009 film, Hannah Montana: The Movie. In a 2015 interview with The New York Times, the “We Can’t Stop” singer took aim at Swift’s squad, including celebrities such as Gigi Hadid and Selena Gomez. When asked if she wanted to be in the clique, Cyrus criticized Swift’s squad, suggesting that a group of celebrity friends aren’t “real people who are living real lives.”

“I’m not trying to be in the squad.” Cyrus said. “None of my friends are famous and not because of any other reason than I just like real people who are living real lives, because I’m inspired by them.”

As for her recent shade, perhaps Cyrus was entertained by the video and wasn’t making fun of Swift at all. There’s also a chance that there are hard feelings between them that we don’t know about. Though it’s only a like, Cyrus must have been aware that fans would’ve seen her double tap and screenshotted it for others to see.

We don’t know what’s going on between Cyrus and Swift, but at least we know that she vehemently disagrees that Swift is Britney Spears 2.0.