Good news for anyone who’s in the market for a T-shirt emblazoned with an image of Miley Cyrus‘ naked body: The 20-year-old singer and twerking aficionado is the latest star to drop trou for Marc Jacobs‘ Protect The Skin You’re In campaign, which fights skin cancer. The tees hit Marc Jacobs stores today and cost $35, with all proceeds from the shirts going to the NYU Cancer Institute and NYU Langone Medical Center.

The initiative first kicked off in 2006 to benefit the New York University Skin Cancer Institute, and has featured a slew of naked A-listers, including Cara Delevingne (whose shirt is pictured below), Victoria Beckham, Kate Moss, Heidi Klum, Naomi Campbell, and Dita Von Teese.

MORE: Miley Reveals What “We Can’t Stop” is Really About

It’s no surprise that Jacobs enlisted Cyrus to carry on the naked torch. The envelope-pushing 50-year-old designer clearly has a fascination with the “We Can’t Stop” singer, as she’s popped up in February at his Fall 2013 runway show (clad in the amazing cropped Mickey Mouse shirt above) and also at the Met Gala, where she wore one of his custom designs.

As Marc Jacobs president Robert Duffy told Women’s Wear Daily: “She’s a lot of fun to be with.” He also added: “She really has a good, solid head on her shoulders. I adore her.”

What do you think of the Miley Cyrus posing naked? Would you buy the shirt? 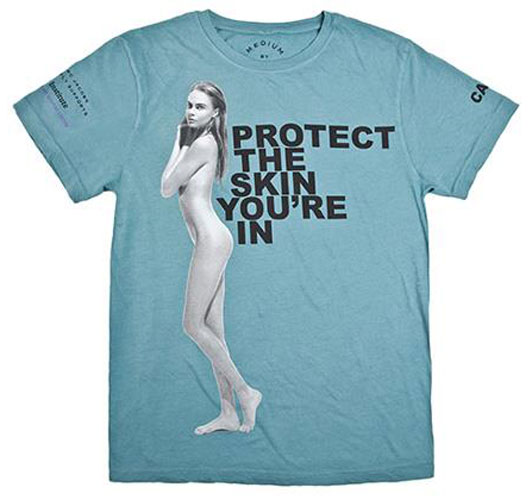