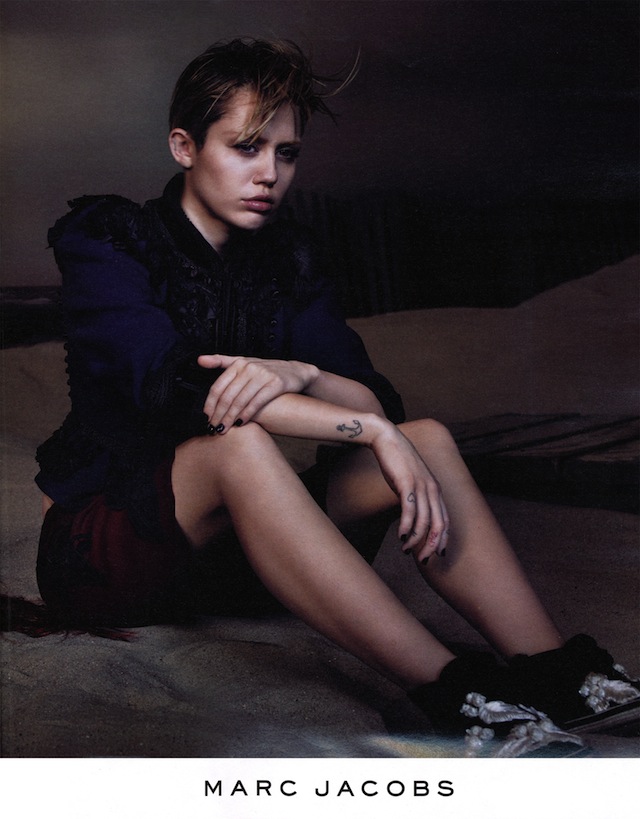 Well, well, well, what do we have here? It looks like everyone’s favorite twerking, tongue-thrusting, creepers-wearing pop star is officially making the move to high fashion. Yes, people: Miley Cyrus is the new face of Marc Jacobs.

To be fair, this news isn’t bowling us over with shock, as we kinda had an inkling that some sort of partnership was a-brewing between these two, starting with a Mickey Mouse-wearing Miley sitting front-row at Jacobs’ Spring 2014 show last February, followed by the pop star wearing the designer to the punk-themed Met Gala in May (and going as his date), which led to Miley showing off her naked pilates-toned body for Jacobs’ ‘Love the Skin Your In’ T-shirt in July.

Plus, earlier this week, Miley posted a pic to Instagram that showed off a Marc by Marc Jacobs marriage equality tee.

So, obviously when the news starting spreading today that Miley was the face of MJ’s Spring 2014 campaign, we definitely weren’t like “WHAT?!” (although we did have that reaction to the fact that she’s fully clothed in the ad.)

According to Marc Jacobs himself, the ads were supposed to be shot by Jacobs’ go-to photographer Juergen Teller, but Teller refused to work with Cyrus. The legendary fashion photographer “just didn’t want to work with her,” said the designer. Oooh.

Take a look at the shot above and let us know: What do you think of Miley’s new Marc Jacobs ad?