Miley Cyrus and Liam Hemsworth announced a separation on Saturday, August 10 and the last five days have been insane. There have been many different reports and theories over what must’ve caused the split. But a new report debunks a lot of the Miley Cyrus and Liam Hemsworth cheating and open marriage claims as to their breakup reasons. There were infidelity rumors—some said the only reason the two announced the split was because Cyrus was unfaithful. Others claimed the Isn’t It Romantic? actor and the “Wrecking Ball” singer had an open marriage. However, sources close to Cyrus claim that all of these are false and that there’s no validity to the rumors.

“Miley was not unfaithful, and all these stories about her being wild and cheating is a bunch of bullshit,” a source told Page Six. “They split up. She’s taking the high road. Everyone is trying to. They were together since she was 16. It’s hard.” In an August 14 report from In Touch, the outlet said an “open marriage” was “on the table” for Cyrus and Hemsworth when they tied the knot in December of 2018. “He knew what he was signing up or, but he refused to make it work, and she felt betrayed,” the source said.

However, that rumor has also been shut down. The sources at Page Six claim that Hemsworth and Cyrus were in a monogamous, committed relationship with one another and they neither of them would “cheat on each other when they were together.”

Basically, what’s happening right now is an attempt to place blame or find a reason behind the breakup. Humans try to solve things, unanswered questions don’t sit well with us, so rather than just understanding there are endless reasons—most probably intangible—why Cyrus and Hemsworth are separating, we try to find exact answers. It’s understandable. These two have been the couple of the decade (on and off, of course). 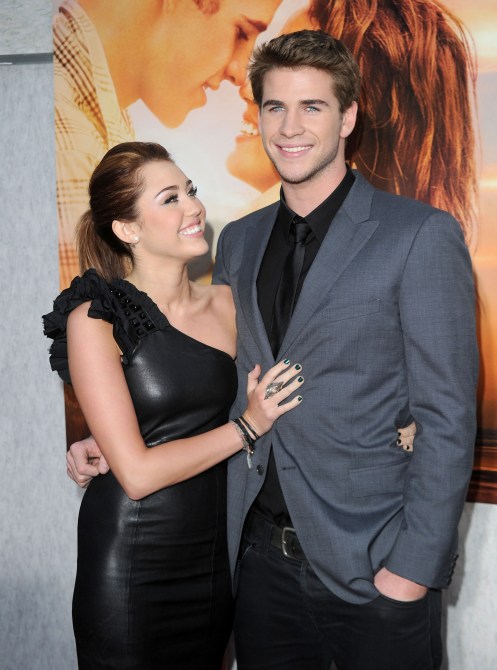 The pair met when they were teenagers, filming The Last Song, in 2009. The co-stars got engaged in 2012 but broke up after a year. But after some good time apart, they reconnected in 2015. Then, just last year, the pair tied the knot in a quiet, secret ceremony at their home.

Although they haven't been seen together recently, Miley Cyrus posed with Liam Hemsworth and a fan following a hike in Canada, where she apparently wore her beloved 2Pac shirt and no pants.

In June, she made a serious statement in a vintage Versace dress at the iHeartRadio Ultimate Pool Party. She's become a serious fan of the brand, which is beloved by rappers, in recent months.

Cyrus seems to hate traditional clothing these days, so here she is in a rather perplexing combination of half-jeans, half-sweats.

She's all about a sexy jumpsuit these days, and we loved the Balmain ensemble she wore to the Billboard Music Awards back in May.

While many who attended the "PUNK: Chaos to Couture" themed Met Gala this year didn't exactly obey the theme, she certainly did—showing up in a chic Marc Jacobs ensemble with her hair fully spiked.

At the Rachel Zoe show at Spring 2013 fashion week, Cyrus rocked a jumpsuit—and we don't think she's changed out of one ever since.

Wowza! In a plunging black Emilio Pucci gown, Cyrus made her first appearance since chopping off (and bleaching) her hair at the hands of Chris McMillan, the man behind "The Rachel."

Just a year ago, before their relationship drama was splashed around in the tabloids, the happy couple celebrated their engagement on the red carpet for the Australians in Film Awards in June 2012.

The first sign that crop tops would be a mainstay in her wardrobe: The Emilio Pucci look at "The Hunger Games" premiere in March 2012. It may have been Hemsworth's big night, but let's face it, we all remember this outfit.

She showed signs of being fashion forward in this David Koma dress with a large sheer panel, but she was still far from where she is today.

This nude halter dress was far more prom than ratchet at the American Giving Awards in December 2011.

Nowadays she channels Rihanna, but back in February 2011 her style inspiration was clearly Stevie Nicks.

For their first public appearance as a couple at "The Last Song" premiere back in March 2010, Cyrus donned a one shoulder black dress. These days, we would be shocked to see her in a dress that didn't have sheer panels or Versace medallions covering it.

Hi—Miley Cyrus & Kaitlynn Carter Are Still Hanging Out in LA