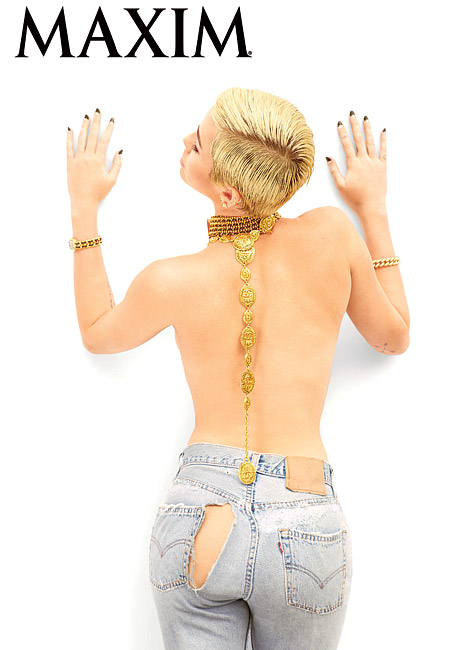 Miley Cyrus has yet again reminded us that her Disney Channel days as “Hannah Montana” are a thing of the past. This time, the 20-year-old starlet posed for Maxim, landing the coveted number one spot of number one on their annual “Hot 100” list.

For the pictorial, Cyrus stripped down (shocker) in a pair of strategically ripped high-waist jeans and what appears to be vintage Versace jewelry, both of which are staples in her wardrobe.

While Cyrus obviously looks killer (the Pilates totally paid off), we can’t help but question why she’s constantly nearly-naked on the many magazine covers she’s scored during the past year. She’s working on an upcoming album, and we get that her non-Disney image is an integral key to its success, but between her racy V magazine cover released last week and her March Cosmopolitan cover, we’ve seen a lot of Miley—in more ways than one.

It’s a safe bet that her new music will definitely sync up with her edgy image—the album includes a collaboration with Snoop Lion—so hopefully she’ll make headlines for other reasons than risque photo shoots and her on-again-off-again relationship with fiancé Liam Hemsworth.

That said, Miley’s been killing it in the style department lately—as she was one of the only stars at the Met Gala who truly went all out for the punk theme (plus, she was on the arm of Marc Jacobs, which is a major coup in and of itself.)

MORE: Miley Cyrus Had To Leave London Apartment Because It Was ‘Haunted’

What do you think of Miley’s latest spread?