Ahh subtext. It’s something that’s not explicitly said, but can be quite implicit. And let us tell you, Miley Cyrus’ latest post definitely seems to be implying something…but what? Well, in the text she shared, Cyrus talked a lot about the importance of being faithful. It has fans thinking Hemsworth cheated when he and Cyrus were together. The “Malibu” singer enjoyed a weekend of yoga, kayaking, hiking and puppy lovin’!  The content seemed endless as the performer shared incredible shot after incredible shot. Cyrus’ sister Brandi and their mom were all part of the fun. As was her adorable pup,  Beanie, who made numerous appearances in her posts.

Amidst all of the workout vids and glam puppy shots, Cyrus then posted what many believe to be a shady post aimed at her ex-husband, Hemsworth.

“Happy Sunday from me & 2 stinky dogs,” the “Don’t Call Me Angel” collaborator wrote in the post. “Waking up surrounded by animals is my favorite way to start a morning. I am immediately reminded to LOVE without conditions…. the best part about animals is that they are careless about the details. They live by the golden rule … Love & Be Loved. Nothing in between. No questions regarding wealth, career, talents, race, age, sex ….They love back 100X …. all they ask for is to be cared for in exchange for loyalty, reliability, and faithfulness. (reminds me of someone).”

Well, we’re all thankful for the unconditional love and support dogs have for their owners.  But tbh, Cyrus’ text is ~full~ of subtext, and we can’t help but notice that these words seem aimed at someone who didn’t exhibit those qualities she values. Eek! 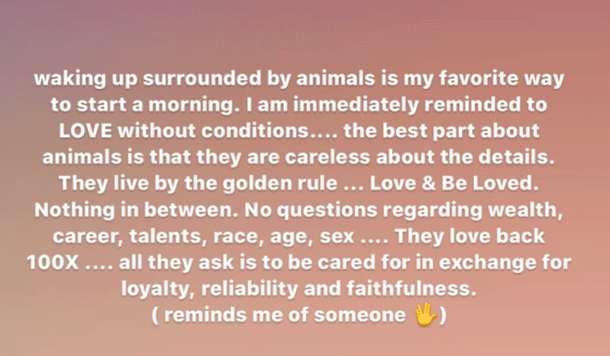 But here’s the thing—it’s important to note that while it seems more likely she’s referring to Hemsworth, it’s also possible she’s directing this at Kaitlynn Carter. The two spent a lavish couple weeks together in Italy this summer, shortly after Cyrus and Hemsworth broke the news of their separation.

In the wake of this news, all of their fans began searching for the reason behind their breakup. The two decided to split after less than a year of marriage (but they’ve been on and off for nearly a decade). Fortunately, both seem to be handling the breakup pretty well. Cyrus has been enjoying a lot of family time and adventures.

Bean has also been the center of her attention.

Hemsworth has laid low on social media, though he did share a post to promote his latest indie action flick, Killerman. It’s…intense.