The 61st Annual Grammy awards are in full swing tonight. The stars hit the red carpet in classic eye-catching fashion, and Alicia Keys greeted the audience with a wonderful opening, supported by some pretty powerful women who epitomized the question, “who runs the world?” “GIRLS!” And while it was a powerful opening, the moment we’ve all been waiting for? Miley Cyrus’s 2019 Grammy performance with Shawn Mendes, and it exceeded our expectations.

Cyrus joined heartthrob and Grammy nominee Mendes for a beautiful and raw rendition of Mendes’s “In My Blood.” The country singer looked absolutely flawless in her black pantsuit and her vocals were as raspy and pitch-perfect as ever. The harmonies between the two young singers was absolute perfection. This duet also confirmed what fans had been thinking—a collaboration between Mendez and Cyrus definitely happened tonight on the Grammy stage! We’re hoping there’s more to come but for tonight; that taste of magic was all we needed.

Look how fierce the duo was. They were singing the hearts out. An Instagram user shared this photo and was very excited about the duet: “#MileyXShawn was UNBELIEVABLE in every way possible!!! I’m speechless!!! 😭❤️🙌🏻 #MileyGRAMMYs
@mileycyrus @shawnmendes@recordingacademy”

CAN YOU EVEN? Their vocals are individually so powerful but together they are unstoppable!

“@shawnmendes & @mileycyrus singing “In My Blood” at the Grammys 2019”

“THIS NOTE. YOU BOTH DID AMAZING TONIGHT @ShawnMendes @MileyCyrus !! #GRAMMYS

And then, as if the gift of Medes and Cyrus together wasn’t enough, Cyrus returned to the stage in tribute to Dolly Parton. She strutted out behind Parton in a gold glitter patterned suit to reprise their version of “Jolene.” It was as stunning as it was when the duo performed the song on NBC’s The Voice  2 years ago.

The tone then shifted with Cyrus and Parton switching to their sultry sides. They were joined—becoming a trio and even went for a beautifully harmonized a cappella moment in Neil Young’s, “After the Gold Rush.”

“Miley Cyrus and Dolly Parton singing Jolene at the Grammys just cleared my skin and paid off my student loans,” one fan joked.

One fan even pointed out how excited BTS was about the duo. “LOOK AT OUR BOYS BTS JAMMING TO JOLENE (Dolly Parton & Miley Cyrus)”

(The boy band was nominated for a Grammy but unfortunately went home with a loss. But they seem to be in great spirits regardless!)

Cyrus returned to the stage tonight to wrap up Parton’s Tribute with an incredible version of “9 to 5.”

Many of us grew up with Cyrus as the secret pop star, Hannah Montana, on the same-titled Disney Channel show. The singer-songwriter tried to break out of that bubble and succeeded when her first chart-topping song, “Party in The U.S.A,” hit No. 2 on the Billboard’s Hot 100 in 2009. We will never forget her cowboy boots and American flag from that music video.

At the 51st Annual Grammy awards that year, Cyrus made her debut on the Grammy stage, which also took place at the Staples Center in Los Angeles (also, as a reminder, 2009 was 10 YEARS AGO. Can you even?). She joined Taylor Swift for a rendition of Swift’s ballad, “Fifteen.”

It was the first time the two Country singers teamed up— they seemed pretty excited about it! 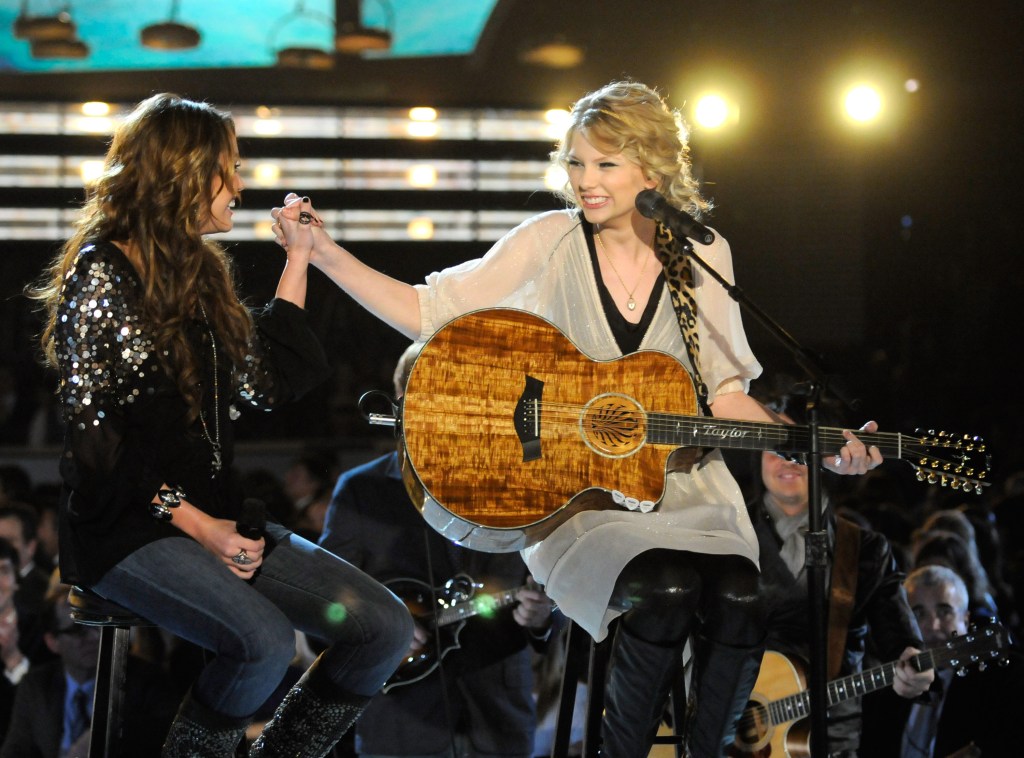 Some have been saying both of these performers were snubbed at the 2018 Grammys. Swift’s album Reputation was not eligible for a nomination given it’s November release, but her two singles, “Look What You Made Me Do” and “Ready For It,” were. However, neither song received any recognition. Similarly, Cyrus’s single “Younger Now” from her Malibu album was also snubbed, despite hitting No. 5 on Billboard’s 200.

Despite the nomination snub, Cyrus jumped at the opportunity to perform with legend Elton John at the 60th Annual Grammy awards held last year in New York City at Madison Square Garden.

The singer joined the 71-year-old singer clad in an iconic sparkly suit to perform his famous 47-year-old hit, “Tiny Dancer.” 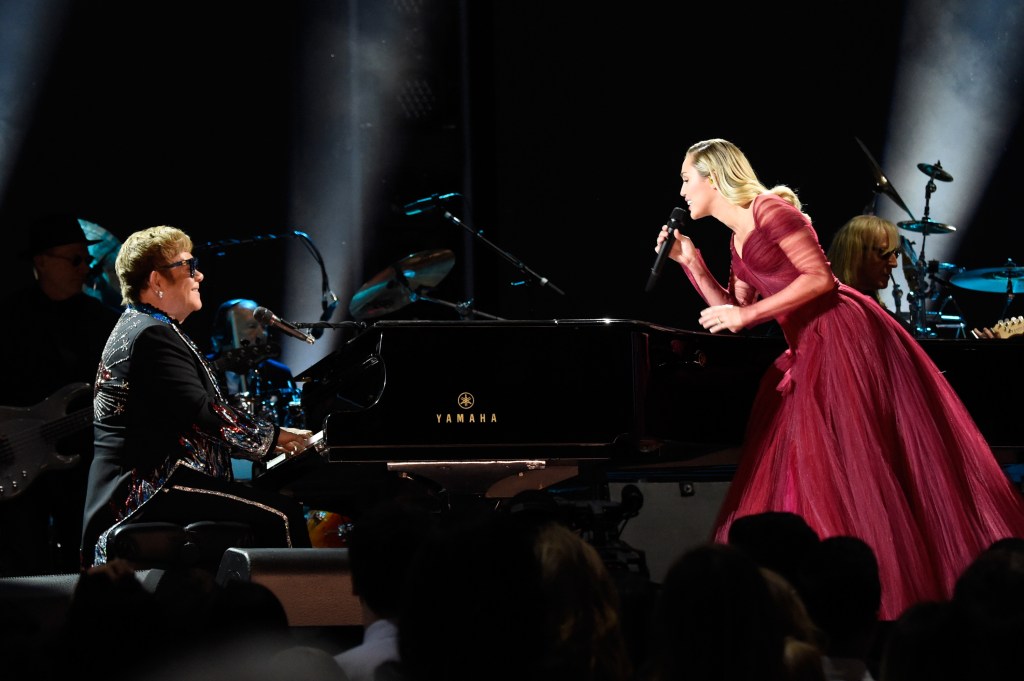 At the end of the performance, John took a bow in front of his piano. How cute is he? And Cyrus looks SO happy. We would be too if we got to perform with Elton John. 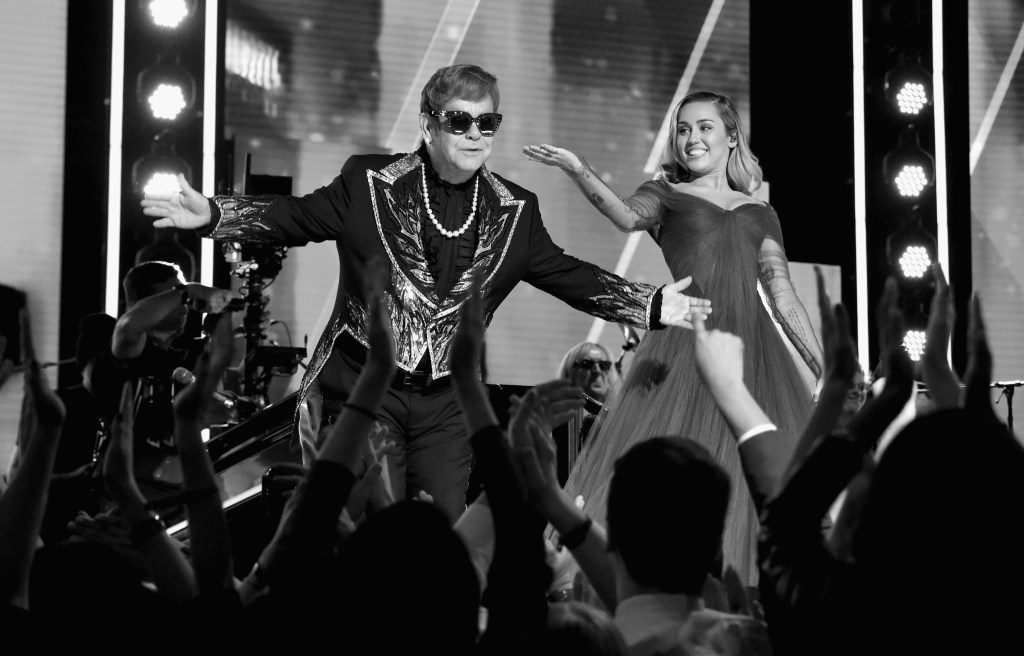 While Cyrus agreed to perform at the Awards show this year, Swift opted out of attending the 2019 Grammys. She is nominated for one award—Best Pop Vocal Album. The singer is instead with her boyfriend at the BAFTA awards in London. We can’t blame her for choosing love over an event she’s attended in the past.

Cyrus received her first Grammy nomination in 2015 for her fourth studio album, Bangerz. She was nominated for Best Pop Vocal Album. Sam Smith took home the award that year for his heart-wrenching and sing-along-in-your-car-with-rain-on-the-windows album, In The Lonely Hour. 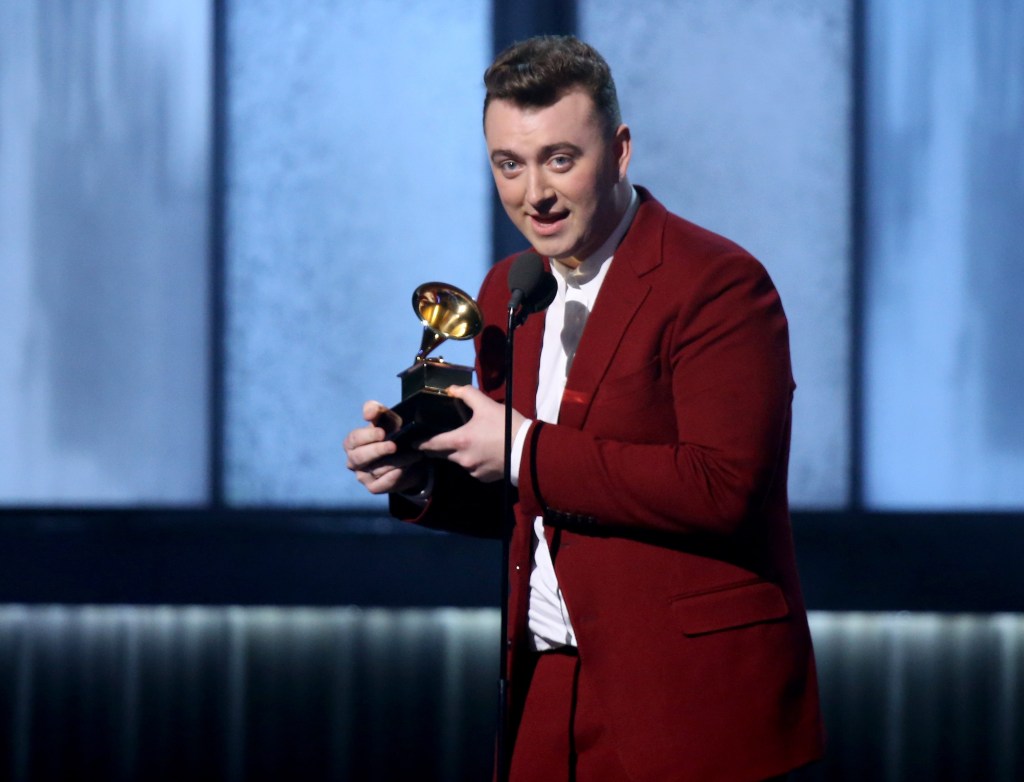 T-Swift actually presented the singer with one of his other wins that night—Best New Artist. 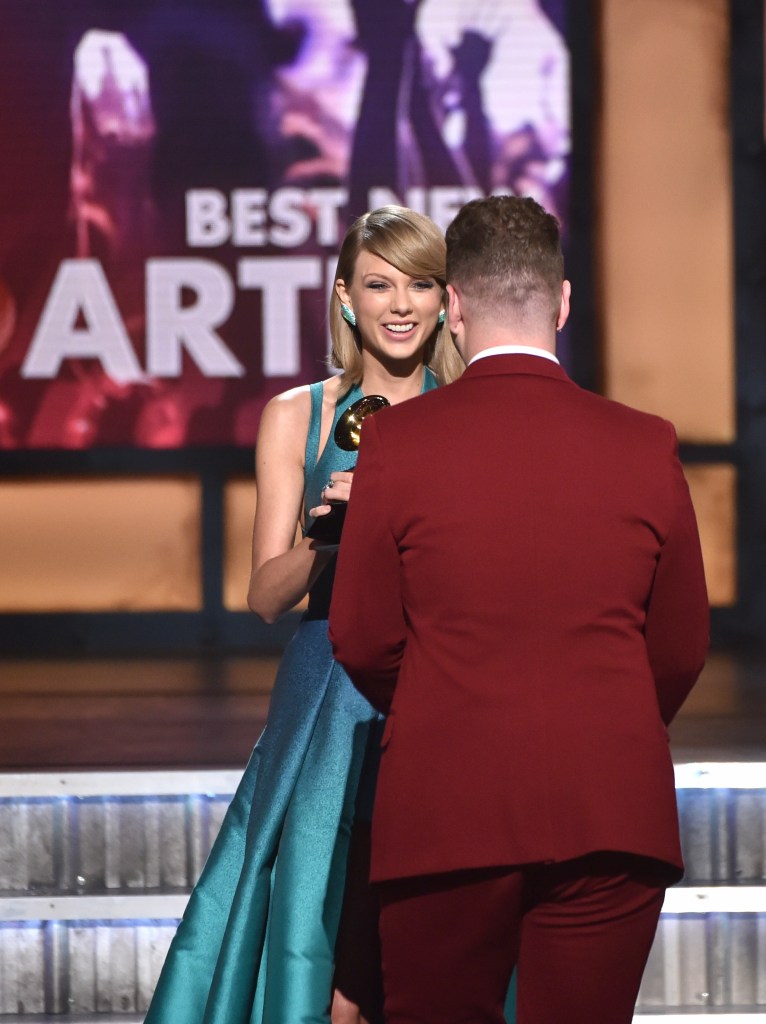 The pair cozied up together backstage for a cute photo-op. 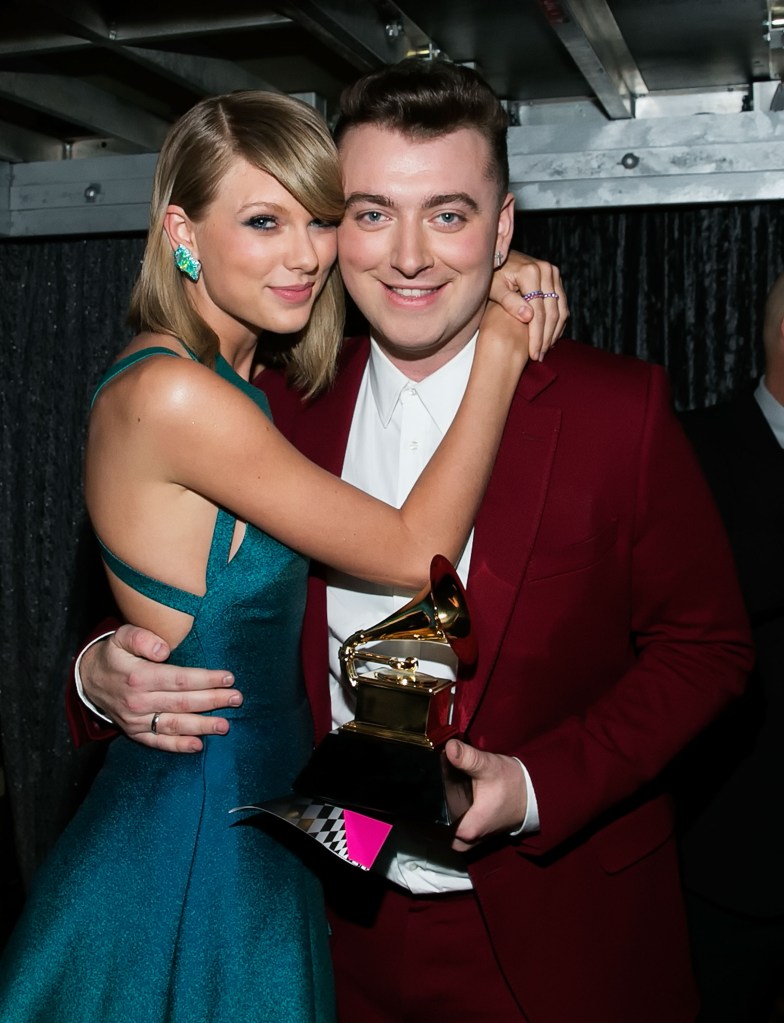 Cyrus has once again proved she has vocal chords of steel with her smokey performance tonight. We’re excited to see what the newly ed has coming up this year in terms of new music. After last year’s matured and more refined musical leaning with “Younger Now”, we’re sure this young starlet has many more layers to show the world.