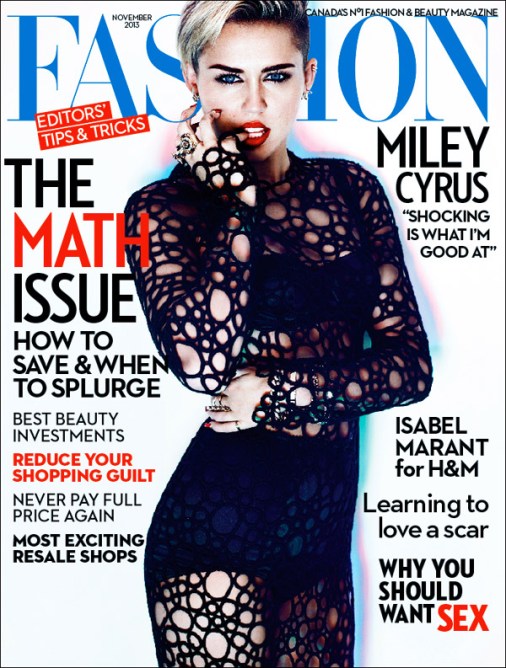 Miley Cyrus and Liam Hemsworth officially confirmed they’d called off their engagement last week, but in the November issue of FASHION magazine, the 20 year-old admits her new song “Drive” was inspired by her desire to split from her fiancé, and it was written back in February.

“I wrote [“Drive” while I was working on Valentine’s Day—emotionally it was such a hard time,” said the actress who met Hemsworth in 2010 on the set of “The Last Song.” It’s about needing to leave someone but not really wanting to completely cut yourself off from the relationship.”

MORE: Who Is Eliza Gonzalez? Get to Know Liam Hemsworth’s New Lady

Okay, that’s harmless enough, but this interview took place a mere ten days after the now infamous MTV’s Music Video Music Awards twerking fiasco, so naturally Miley dished about the raunchy performance to the Canadian mag, as well as a host of other topics.

While we admire her bravura when it comes to talking about herself, we can’t help but think she actually sounds a tad full of herself. Read on for four reasons why.

1. On the VMAs:
“I was trying to slap Robin’s ass but no one saw it! I feel like music is really stale right now. I could have guessed what a lot of artists would have done that night. The reaction to what I did has been insane. I think it was a breath of fresh air! For the people that don’t get it, you weren’t meant to.”

2. On How Fashion Separates Her:
“I think it is important that I execute a look better than other people. Fashion is what separates me from everyone else,” Miley said, while wearing a black crochet Kauffmanfranco bodysuit over a tiny black crop top and tight black shorts.

3. On her New Hip-Hop Pals: “I found what I wore on the red carpet to the VMAs with Pharrell [Williams]. It was a Dolce and Gabbana piece from 1992—the year I was born. He saw it and said, ‘you have to buy it.’”

4. On said VMAs Outfit: “I think that outfit added a factor that the other girls couldn’t compete with.”

What do you think? Is Miley just being Miley, or has she gotten a little too full of herself? Sound off!

MORE: No Boyfriend? Here Are 7 Surprising Perks Of Being Single