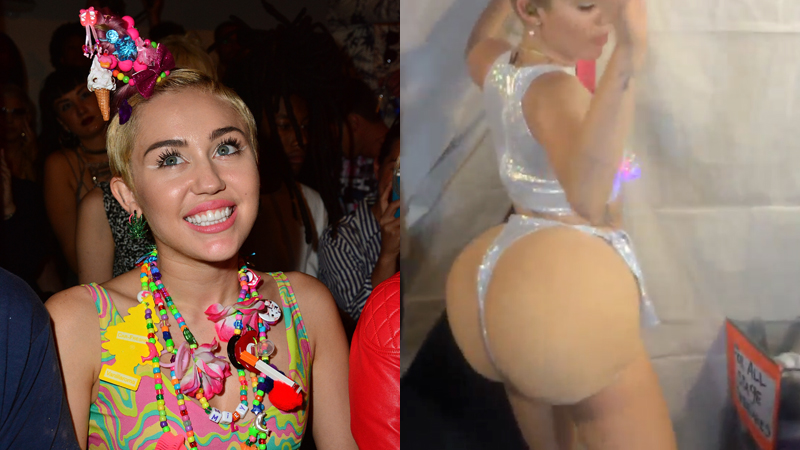 Miley Cyrus has a new favorite accessory—and, no, it’s not any of her new “art” jewelry—it’s a fake prosthetic butt, which she has been proudly showcasing everywhere from her concerts to her social media accounts. (Yeah, we thought we’d seen it all, too.)

Cyrus has been wearing said fake butt absolutely everywhere of late—from on-stage performances to Instagram twerking videos (you can watch one right here). Now, while a massive prosthetic butt may initially seem bizarre, let’s remember that this is Miley, so weird behavior is now rather standard. Here’s the problem: Apparently, she took her antics a little far during a performance in Monterrey, Mexico, stirring the anger of local politicians.

Here’s what allegedly went down: Cyrus was apparently dancing around—sporting that good ol’ prosthetic butt—when two of her back-up dancers started whipping her butt with a Mexican flag. Now, the big problem with this kind of performance—other than the obvious—is that Mexico actually has a law that protects “national emblems, the flag and the national anthem.” Disrespecting the national flag, for example, can result in fines and up to 36 hours in jail.

Local politicians in Mexico are apparently in an uproar that Cyrus disrespected their flag, and one even accusing her of “desecration” which would warrant an even harsher penalty.

Watch a video of the incident below—the whipping begins at about 2:20—and let us know what you think. Was this all in good fun, or do Mexican politicians have cause to be offended?