Although Miley and Kaitlynn reportedly parted ways because things were moving too quickly, her relationship with Cody is moving at lightning speed as well. They already refer to each other as “boyfriend” and “girlfriend,” and they’re not shy about serving up a ton of PDA on social media. But Cody revealed to People that it’s nowhere near as “sudden” as it seems. “The reason why it hasn’t been a really crazy sudden thing is just because we’ve been friends for so long,” he explained to the outlet. He added that they “found each other again in a space where we’re both not partying, working real hard, and it just keeps things healthy and it’s good.” 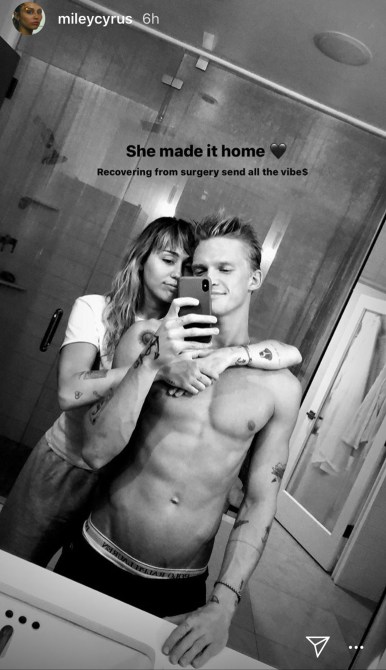 “Any girlfriends I’ve had in the past has always been immediate romance and so it’s a different experience having been friends with somebody before and it developing naturally into something more,” Cody said. In addition to being BFFs, he and Miley have a lot in common. “She’s creative. She’s very passionate about what she does, and I’m very similar in that sense. That’s why we get along so well.”

Cody is clearly dedicated to romancing Miley as much as possible—he even serenaded her while she was sick with tonsillitis at the hospital, and he’s going to release the song soon. “I wrote her a song this week that she’s pretty much forcing me to put out,” he said. “She was like, ‘If you don’t put this s**t out, I’m putting it out on your behalf for you. I’m getting your Spotify login and doing this s**t myself.”