This is a lot to take in. This revelation that Miley Cyrus changed for Liam Hemsworth throughout their marriage is so much. If you weren’t aware, Liam and Miley are officially a wrap. The pair separated publically just a couple of weeks ago and on Aug. 21–Liam filed for divorce citing, “irreconcilable differences.”

Though Miley is said to be shocked by the filing–she wasn’t blindsided by it. It’s clear that she’s been enjoying her freedom and removing the label of “wife” from her life. An insider told Hollywood Life, “Miley was not fully blindsided by Liam’s filing since they had already separated. They really haven’t been speaking.” These days, the She Is Coming songstress has been romancing reality starlet Kaitlynn Carter. They’ve been spotted vacating together and serving PDA in Los Angeles. Miley recently even got a tattoo to commemorate their time together.

Now, sources are saying Miley is loving this newfound freedom because she felt like she had to change who she was to be with Liam. “She just got to the point where she didn’t want to hold back about who she is,” an insider told People. “She wants to be true to herself. Being with Liam, this was just not possible. For them to be happy, she had to change as a person too much. She knows not being with Liam will make her happier in the long run.” 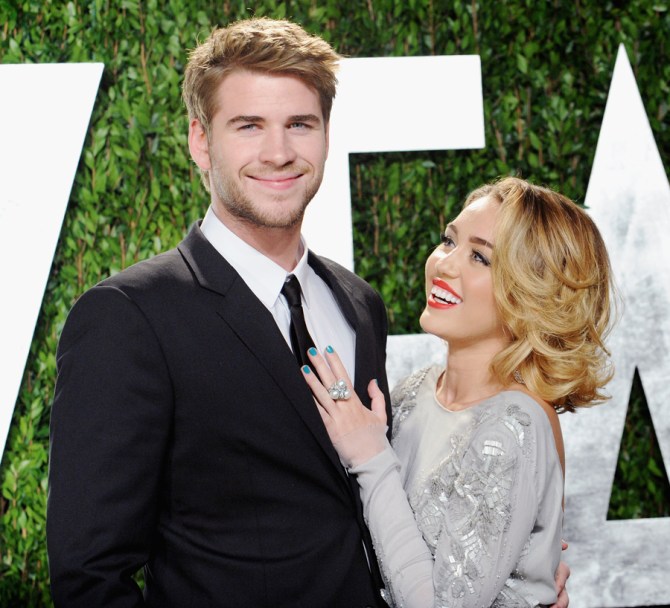 Though the pair never spoke openly about having an “open marriage,” Miley hinted that they had a non-traditional relationship. Apparently, Liam wasn’t exactly thrilled about that. “Liam’s decision to file for divorce is sad, but in the end, it was never going to work,” a source told Entertainment Tonight source said. “They are too different. Liam never wanted to share Miley with anyone. He loves her and he is far too traditional. He finally realized he just wants to start fresh. Liam has come to terms that it was time to move on. Liam’s family has been incredibly supportive. They are relieved it’s over.”

It’s tough, but love and history cannot sustain a relationship. We hope both Liam and Miley find happiness moving forward.

Although they haven't been seen together recently, Miley Cyrus posed with Liam Hemsworth and a fan following a hike in Canada, where she apparently wore her beloved 2Pac shirt and no pants.

In June, she made a serious statement in a vintage Versace dress at the iHeartRadio Ultimate Pool Party. She's become a serious fan of the brand, which is beloved by rappers, in recent months.

Cyrus seems to hate traditional clothing these days, so here she is in a rather perplexing combination of half-jeans, half-sweats.

She's all about a sexy jumpsuit these days, and we loved the Balmain ensemble she wore to the Billboard Music Awards back in May.

While many who attended the "PUNK: Chaos to Couture" themed Met Gala this year didn't exactly obey the theme, she certainly did—showing up in a chic Marc Jacobs ensemble with her hair fully spiked.

At the Rachel Zoe show at Spring 2013 fashion week, Cyrus rocked a jumpsuit—and we don't think she's changed out of one ever since.

Wowza! In a plunging black Emilio Pucci gown, Cyrus made her first appearance since chopping off (and bleaching) her hair at the hands of Chris McMillan, the man behind "The Rachel."

Just a year ago, before their relationship drama was splashed around in the tabloids, the happy couple celebrated their engagement on the red carpet for the Australians in Film Awards in June 2012.

The first sign that crop tops would be a mainstay in her wardrobe: The Emilio Pucci look at "The Hunger Games" premiere in March 2012. It may have been Hemsworth's big night, but let's face it, we all remember this outfit.

She showed signs of being fashion forward in this David Koma dress with a large sheer panel, but she was still far from where she is today.

This nude halter dress was far more prom than ratchet at the American Giving Awards in December 2011.

Nowadays she channels Rihanna, but back in February 2011 her style inspiration was clearly Stevie Nicks.

For their first public appearance as a couple at "The Last Song" premiere back in March 2010, Cyrus donned a one shoulder black dress. These days, we would be shocked to see her in a dress that didn't have sheer panels or Versace medallions covering it.