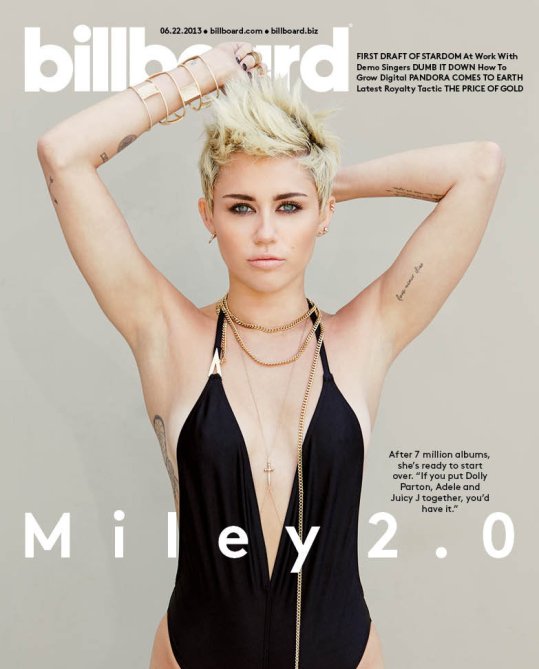 On her newest song, Miley Cyrus sings that she “can’t stop,” and she really doesn’t seem to be able to. The newly hip-hop-inspired singer is on the cover of the most recent issue of Billboard magazine, and she continues to just say the most ridiculous things.

“If you put Dolly Parton, Adele, and Juicy J together, you’d have it,” Miley says of her current inspirations. “I want to start as a new artist. I consider my upcoming album my first, really.”

Also, “We Can’t Stop” is apparently based on a very true story.

“I didn’t make this song for the critics, but for the people living it,” Miley says while allegedly smoking a cigarette. “I’m 20 years old and I want to talk to the people that are up all night with their friends. It’s based on a true story of a crazy night I had: When I heard the song for the first time, it captured exactly what I was living.”

Okay, so Miley is wearing leather bustiers, posing on Twitter with her bum in the air, singing about drugs, and smoking cigarettes. And she thinks she’s a rapper. Class dismissed!

Head over to Billboard.com to read the rest of the cover story.

MORE MILEY ON STYLECASTER:
Miley Cyrus Strips Down (Again) For Another Sexy Spread
Miley Cyrus Rocks a Racy Monokini On The Cover Of Her New Single
Miley Cyrus Wears The Same Valentino Jumpsuit As Lena Dunham