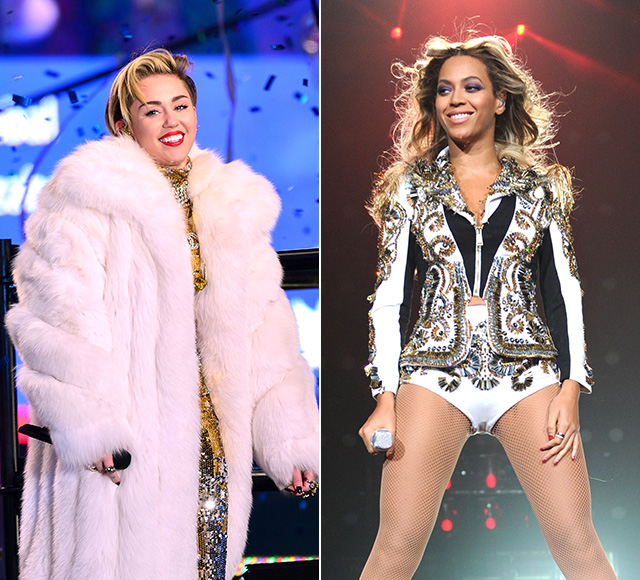 We’re not terribly shocked that—after yesterday’s events—rumors would start emerging from the woodwork about Miley Cyrus and Beyoncé, but now it seems they might have more in common than just gossip.

To refresh your memory: Reports starting surfacing that Miley dissed Bey in the March issue of LOVE magazine, spewing a potpourri of bombastic (and laughable) comments including “Beyonce has been a big inspiration to me but she’s been out for such a long time. She’s so talented and I think she’s at the top of the game now but people are always looking for new blood and that’s what I bring to the game now, new blood. I got the total package you know, the curves, the rhythm, and the voice. I’m just the best.”

Now, it seems the two stars are connected in more ways than gossip: According to RadarOnline, Miley’s mega-hit “Wrecking Ball” could have been written for Queen Bey.

Rumors about who the writers actually wanted to take the track first started in December 2012, when songwriter Sacha Skarbek posted this on Twitter:“Beyonce song now becoming a Miley Cyrus song?!! Good/bad? I don’t know??!!!!”When “Wrecking Ball” was released in September 2013, Skarbek was listed as one of the writers on the track, alongside hit-maker Dr. Luke, reported Radar, leading many to believe that it was the almost-Beyonce song in question.

Now, a rep for Skarbek told Radar that while “Wrecking Ball’ wasn’t exactly written for Beyoncé, it almost was.

“Originally, the [songwriting session between Dr. Luke and Sacha] was booked to write a song for Beyonce,” the rep said. “But as the song [‘Wrecking Ball’] progressed, the songwriters realized the song would not work for her.”

We know this happens often with artists (check out this list of famous pop songs originally written for other singers), but it’s interesting to think about the fact that Beyoncé could have had the power ballad if she wanted it.