We don’t have to tell you about the epic transformation J. Crew has undergone during the last few years and—as a result—caused some dissatisfaction among loyal customers who feel the merchadise and the prices have taken a turn toward the impractical, and that the company has gotten so caught up in its styling, its place in the fashion canon, and pleasing the hoards of Jenna Lyons wannabes that it completely lost sight of its initial utilitarian vision. 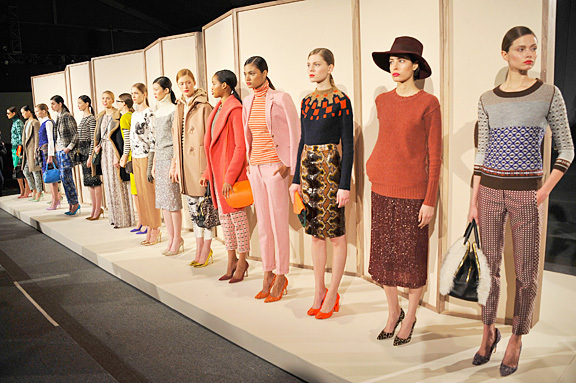 In a surprising admission last July, J. Crew CEO Mickey Drexler agreed with these disgruntled consumers and said that the label’s recent collections had ”strayed too far from the classics” and were—in all their mixed-print glory—possibly too overstyled. Drexler also urged shoppers to be patient, as the Fall 2013 collection would be inching its way back toward the brand’s basics.

While we did see a slight shift aesthetically this fall, the prices were still high, and the inclusion of J. Crew’s Collection items in its fall style guide—high-end pieces made from luxe fabric—caused both shoppers and bloggers to scoff (a short-sleeve embellished sweater cost $1,900, and a winter coat clocked in at $2,500.)

However, according to Drexler, prices may start to fall this spring on some main-line, middle-of-the-road merchandise, but the Collection isn’t going anywhere.

“For spring, you’ll see our prices much more friendly this year,” said Drexler, who was the guest speaker at Manhattan’s New School’s University Center on Tuesday, reported WWD.  “We can’t compete with designers. Our Madison Avenue and 66th Street Collection store does an enormous amount of business.”

According to WWD, Drexler also touched upon J. Crew’s international expansion plan, which will grow incrementally and cautiously for now. The retailer has three stores in the U.K. and will open two more later this year, while  two units will open in Hong Kong this spring.

“We’re holding off on China and the rest of Europe,” Drexler said, noting that the company had $2.5 billion in sales in 2013. “The reports on China are very mixed, and we’re not ready. We don’t want to overexpand too quickly. We’re going slow. We’re in 101 countries online and have a total of 400 J. Crew stores. Madewell has 65 stores — that’s a big growth opportunity.”

To read more highlights from Drexler’s speech—including who he thinks is the most valuable retailer right now—head over to WWD.