This year provides audiences with two chances to see Michelle Williams in theaters: I Feel Pretty and Venom. Yet fans will have approximately zero chances to see Williams’s pixie cut in all of its pixie-cut glory, and that’s because she wears a wig in both films. Covering a pixie cut that good should be illegal, but these movies aren’t alone in their crime against good hair. Williams has actually worn wigs in nine of her last 10 films—a trend that not only is criminal to Williams’s pixie cut but highlights a greater issue in Hollywood regarding beauty standards, short hair and what it means to be seen as a leading lady. 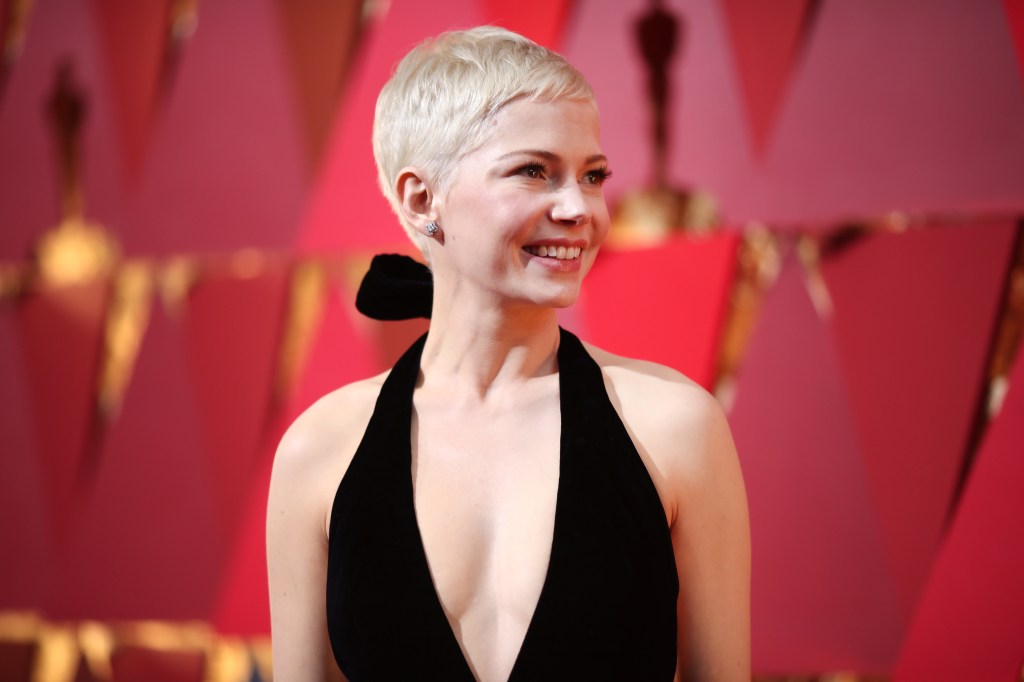 The trend of Williams wearing wigs on-screen began with 2011’s My Week with Marilyn, which saw Williams’s short platinum-blonde wig as an essential tool in transforming her into Marilyn Monroe. It’s not surprising, perhaps even expected, that Williams would wear a wig; drastically changing one’s appearances with hair and makeup is common in biopics. Nor is it surprising that Williams wore a wig as Glinda in 2013’s Oz the Great and Powerful, an adaptation of 1939’s The Wizard of Oz, which saw Glinda with long, shoulder-length blonde hair. Williams’s following films, including Suite Française, The Greatest Showman, All the Money in the World and Wonderstruck, also saw her with wigs.

Though it can be argued that some of these wigs were necessary based on the film’s period or source material, not all of Williams’s wigs have substantial arguments. One case is 2016’s Manchester by the Sea, which earned Williams her fourth Oscar nomination for only 11 minutes of screen time because, yes, she’s that good. What wasn’t so good was the wig she wore, which served perplexing purpose in this film as it’s not set to a period nor was it necessary to stay true to source material. Williams plays a mother whose children die in a fire, and the wig was intended to highlight the passage of time, which could honestly have been done in many other ways rather than making Williams wear a distractingly bad wig. 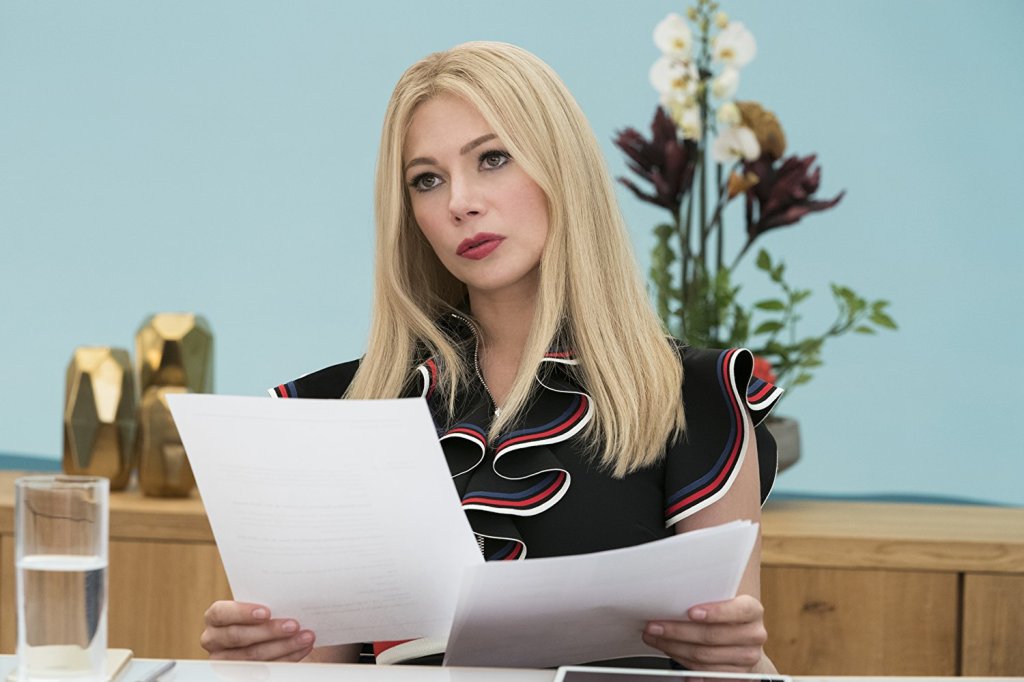 This brings us to two of the most egregious examples of Williams’s unnecessary wigs: I Feel Pretty and Venom, two films from this year, which emphasize Hollywood’s ever-present association between long hair and beauty. In I Feel Pretty, Amy Schumer’s comedy from April, Williams plays Avery LeClaire, a vapid, insecure entrepreneur working in the beauty industry. In the movie, Williams wears a mid-length blonde wig that falls a few inches below her shoulders.

There are several issues here. The first is that many women in the beauty industry have shorter hair; even the Kardashian-Jenners, certified titans of the beauty industry, are known to cut their hair when the mood strikes. The second is the necessity for Williams to wear a wig to play a high-powered beauty boss suggests the following: “Hey, Michelle Williams. We want you to be the embodiment of beauty standards. And you are. Mostly. You’re conventionally attractive and thin, but your hair is short. So, wear this wig for longer, more traditionally beautiful hair. Thanks.” 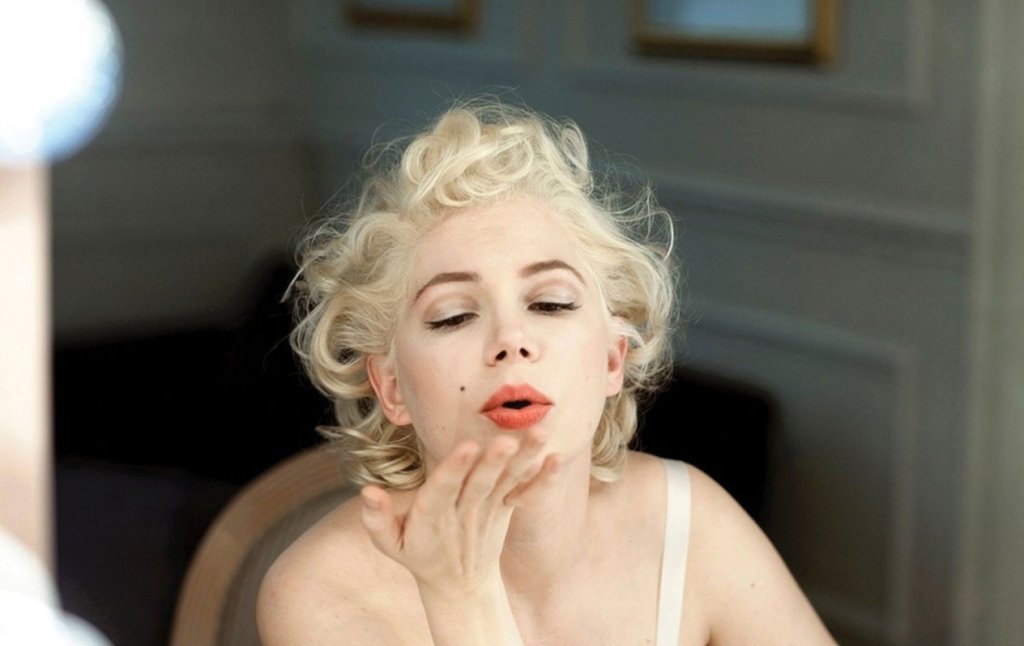 In the trailer for Venom, Marvel’s Spider-Man spinoff debuting in October, Williams wears a wig that falls beneath her shoulders and is a shade of blonde not unlike her own. She’s set to appear as Anne Weying, Eddie Brock/Venom’s comic-book love interest. Though it’s easy to assume that Williams wore this wig to look more like the comic-book character she’s playing, that’s not exactly the case. Most comic-book incarnations of Anne feature her with short blonde hair about the length of William’s real-life pixie cut. The wig actually makes Williams look less like the character.

So if it’s not to stay true to the comics, what is the purpose of William’s wigs? Very simply, it’s to make her look more conventionally attractive as the central love interest in a major studio release. There are very few times in the last 20 years that a love interest in a film of the same scale has, in fact, had short hair. This is a trend across the entertainment industry, too. A recent example is The Bachelor, which took 22 seasons to cast a contestant with a pixie cut. 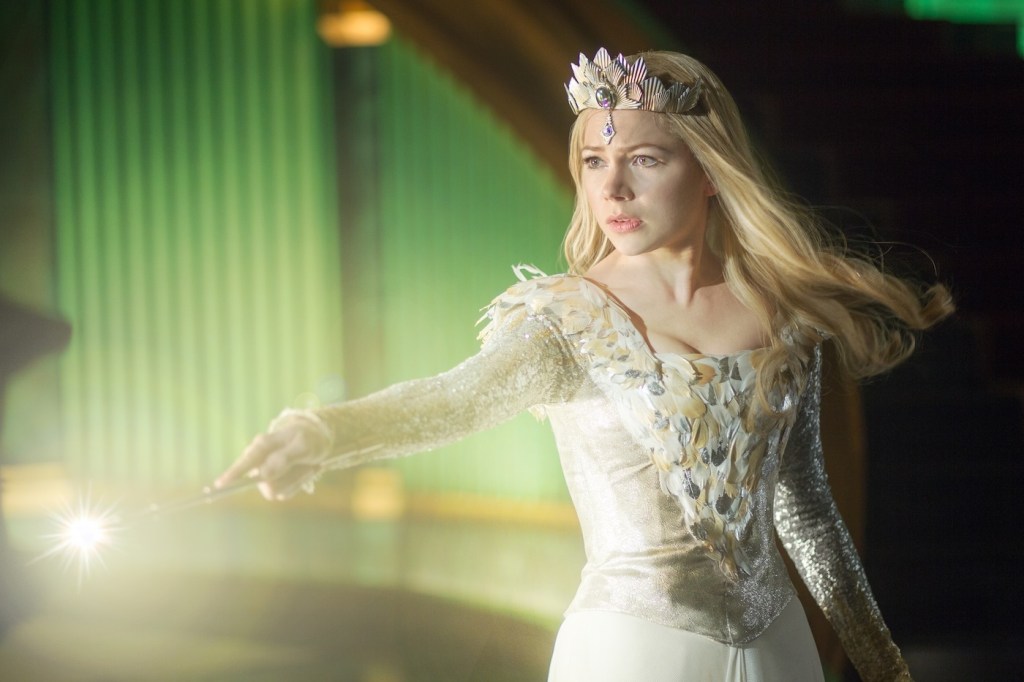 Of Williams’s last 10 films, there’s only one where she doesn’t wear a wig: 2016’s Certain Women. Along with being wig-free, Williams was also makeup-free. What’s even more interesting about Williams’s wig-free and makeup-free look is that the film was helmed by a female director, Kelly Reichardt, who collaborated with Williams on two other films, which also saw her without a wig and makeup. And while it seems like Reichardt has an affinity for showcasing Williams in her natural beauty, it should be mentioned that Reichardt’s small-budget indie films likely come with more creative freedom than, say, Sony’s Venom. More creative freedom means less restriction from Hollywood beauty standards and, in turn, the potential for fewer wigs.

Still, it’s not a coincidence that in Williams’s last 10 films, Certain Women is the only one led by a sole female director and the only movie in which Williams’s short hair is seen in all its natural glory. “Female directors understand the work that goes into makeup,” said Vivian Baker, who worked as the head of makeup on Oz the Great and Powerful, via email. “Filmmakers are all about creating the character to work with the story. They are storytellers.” 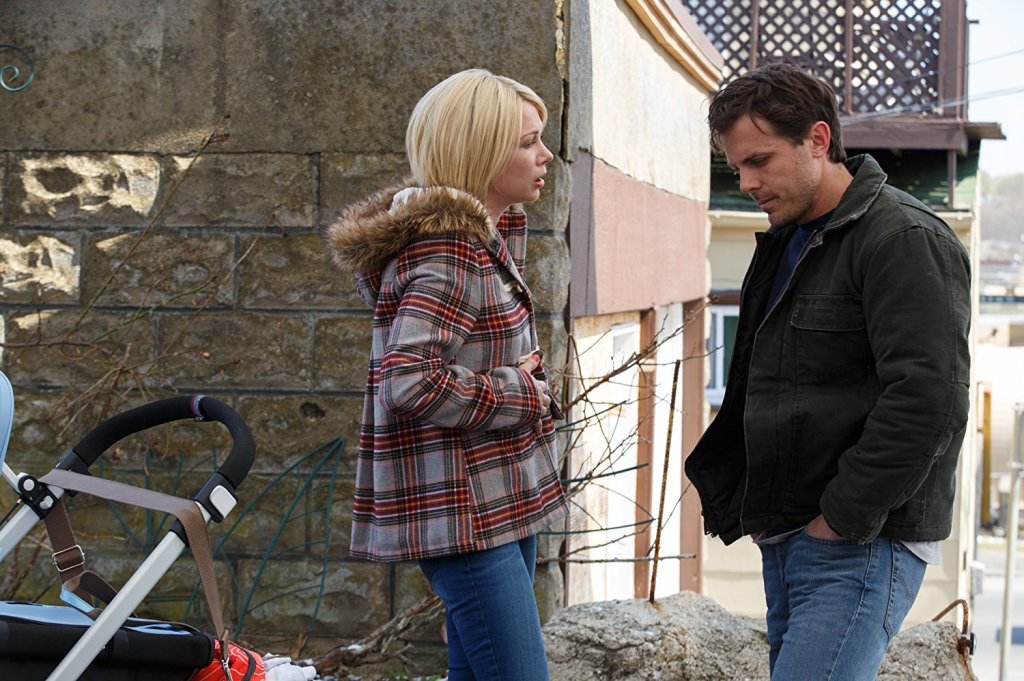 The mysterious case of Williams wearing wigs may be explained in her shift to more adult roles, leading to her work in period pieces, biopics and studio productions. Still there remains a direct correlation between her wigs and when she debuted her pixie cut at 2010’s Cannes Film Festival. Since then, Williams hasn’t grown her hair out in any substantial way—with her 2015 lob being the longest it’s been since—and she’s worn wigs for about 90 percent of her roles. In the seven years between the final Dawson’s Creek (in which she’s seen with long, shoulder-length hair) and her 2010 pixie cut, Williams’s transition from TV actor to Hollywood movie star featured her wig-free in a handful of films, including Blue Valentine and Deception. That all changed in 2010 when Williams cut her hair and almost exclusively wore wigs on-screen.

If you are a conventionally attractive actress who’s still young enough to be considered a love interest by Hollywood’s standards, there’s little likelihood you’ll appear on-screen with a pixie cut. Jennifer Lawrence and Emma Watson both had pixie cuts that they’ve since grown out, and neither of them appeared on-screen when their hair was at its shortest. In V for Vendette and Les Misérables, Natalie Portman and Anne Hathaway, respectively, appeared with shaved heads, though their heads were shaved as plot points in the films. Of course, conforming to beauty standards isn’t particular to white women. Black women relax their hair or wear wigs on-screen so often that Black Panther’s celebration of natural hair was deemed revolutionary. 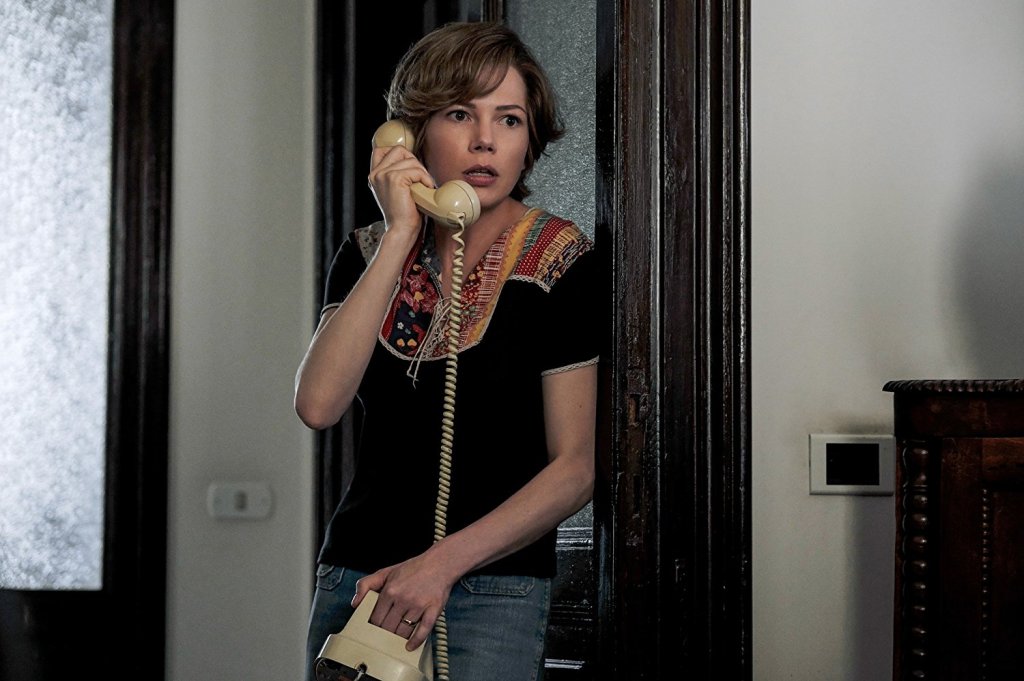 Ginnifer Goodwin is one of the few actresses, like Williams, committed to shorter hair. In order to keep her hair short, Goodwin confessed to having a “wig clause” written into her contracts. (There’s no word on whether Williams, too, has opted for a wig clause.) Goodwin’s adorable pixie cut did appear on ABC’s Once Upon a Time, but under the guise of this being her “regular person” hair. When Goodwin appeared as Mary Margaret Blanchard, a fourth-grade teacher in the small town of Storybrooke, she wore her pixie cut. When Goodwin appeared as Snow White, she wore a long brunette wig that cascaded down her shoulders. The show’s representation of shorter hair was a win; the fact that it ultimately implied the difference between a normal person and a princess is long, flowing hair was a loss.

There’s Williams, and at the other end of the spectrum is Blake Lively, who’s known in Hollywood for her long, princess-like hair. Lively’s hair almost always appears on-screen and is practically a costar in her films. This isn’t commentary on Lively’s acting abilities, but rather the way the camera follows her hair. Whether it’s the healthy hair of a teenage soccer player (Sister of the Traveling Pants), the expensive hair of a wealthy It-girl (Gossip Girl), the old-fashioned hair of someone who hasn’t aged in a century (Age of Adeline) or the wavy hair of a surfer (Shallows), the focus is on Lively’s hair. Because it’s so rare to see Lively’s hair hidden under a wig, recent photographs of her filming 2019’s The Rhythm Section—while wearing a wig!—spawned headlines about the actress looking “unrecognizable.” Williams, on the other hand, doesn’t elicit the same reaction, as it’s almost expected that she don a wig on-screen. Though it certainly seems like Williams wears more wigs than the average four-time Oscar nominee, is that actually the case?

Baker argued that the practice is more common than fans might think. “Wigs are used quite often. You might be surprised how often,” she said. Baker explained that good wigs are expensive, and there are budgetary concerns. Baker, who has also worked with actresses such as Lively, Hilary Swank and Gwyneth Paltrow, clarified that the only agenda is for actresses to fit into the character they were cast to play. “Producers, on the other hand, prefer them looking beautiful. But not fake,” she added.

While it’s true that Williams doesn’t look “fake” in the trailer for Venom, is a wig covering her pixie cut truly necessary in order to to make her (a brand ambassador for Louis Vuitton, no less) look beautiful on-screen? The answer is no, but it does seem that as long as Williams is conventionally attractive, considerably young and acceptably thin, she will continue to be cast as leads, love interests and good witches and will likely continue wearing wigs to play those roles—unless she grows out her hair, of course. 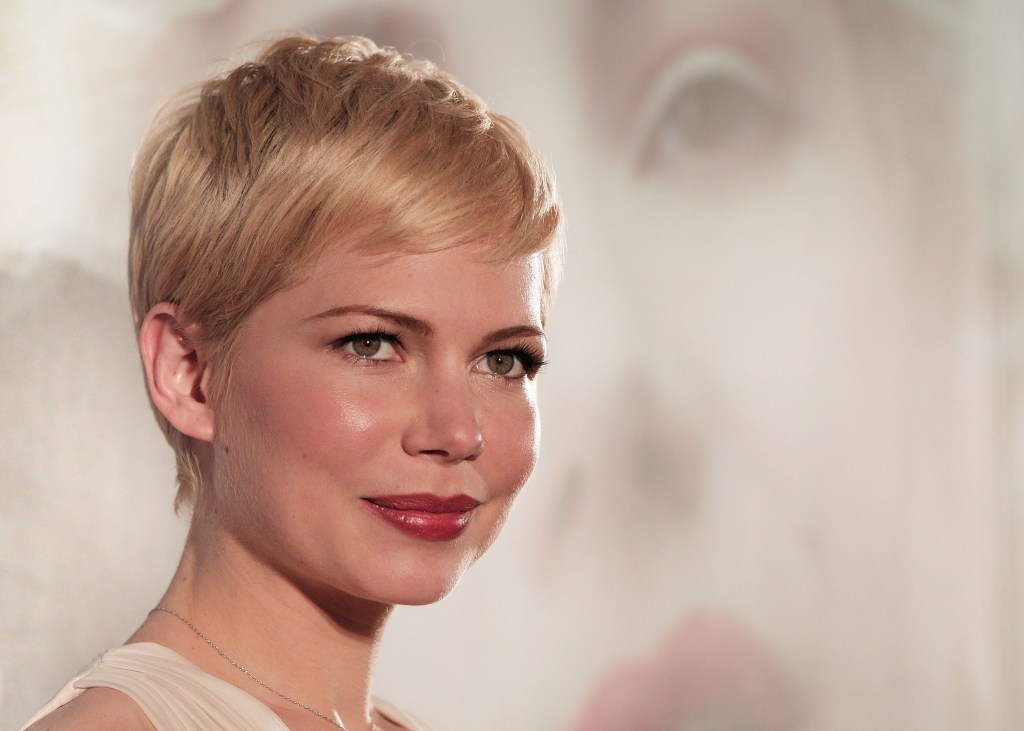 Considering that the premise of I Feel Pretty condemns arbitrary beauty standards, Williams’s hiding her pixie cut under a wig of longer hair feels like an unintentional metaphor for the film—and perhaps the entertainment industry as a whole.