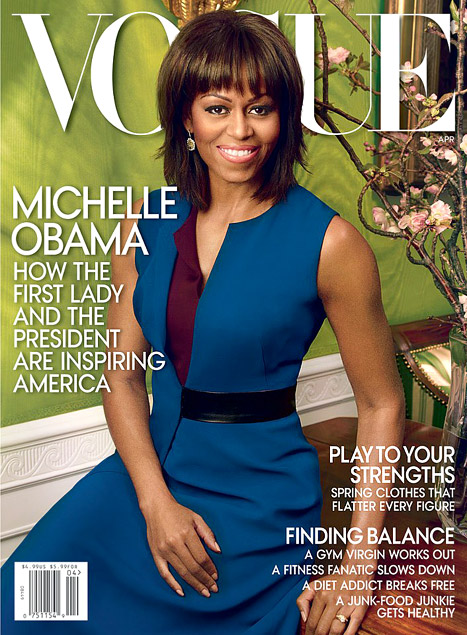 After months of rumors and speculation, Michelle Obama‘s second Vogue cover is finally here. FLOTUS graces the April 2013 issue clad in a simple blue and purple sheath by 47-year-old designer Reed Krakoff that’s out of her own closet (unlike most others who appear in Vogue wearing couture pulled by top stylists.)

Given Obama’s reputation for repeating looks and supporting American designers, it’s no surprise she chose Krakoff, whom she also wore in her official portrait.  In the Vogue spread, Obama appears in Michael Kors as well, another designer she’s consistently championed.

The 49-year-old First Lady opened up to the mag about ways in which she balances life in the spotlight, stating that her priorities are relatively simple. “Our job is, first and foremost, to make sure our family is whole,” she said. She also discussed her marriage to President Barack Obama and what she learns from him. “Well, patience and calm I’m borrowing. Or trying to mirror. I’ve learned that from my husband, that sort of, you know, ability to not get too high or too low with changes and bumps in the road,” she admitted.

Obama first covered Vogue in March 2009, in a pink dress created by the designer she put on the map, Jason Wu. The April issue hits newsstands on March 26.