Most days, you can find me in my office at SHE Media in New York, trying to keep up with an ungodly number of Slacks and emails, attending meetings and scavenging for snacks. But on a recent Thursday morning, I found myself waking at 6am in a first-class hotel suite in Northern California, fireplace roaring, about to embark on a very unique adventure.

The week before, I’d accepted an invitation from Mercedes-Benz and Glamour to attend a special event for media and influencers in Carmel, CA. While there, we’d hear from inspiring women (including beauty boss Kate Somerville and Glamour Editor-in-Chief Samantha Barry), and mingle with fellow attendees such as Jessica Hart and Sara Sampaio. But the main draw was that we’d be driving Mercedes-Benz AMG race cars at the famed Laguna Seca Raceway, under the tutelage of pro drivers from the AMG Driving Academy.

The overarching theme of the two-day event was ‘empowered women empower women’—a concept familiar to me as Editor-in-Chief at SheKnows and STYLECASTER, where we live that ethos every day. But what do race cars have to do with women’s empowerment? And what would it feel like to slide behind the wheel of a $250,000 Mercedes-Benz AMG GT3, commandeering it around a professional race track, drifting at high speeds and competing on an autocross course?  I was about to find out. 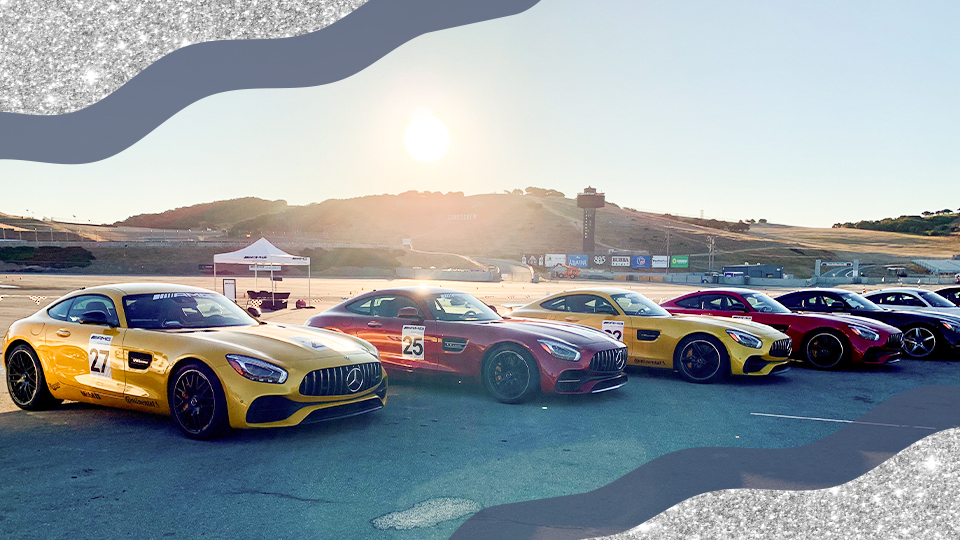 I grew up in the ‘80s, long before anyone was really talking about gender norms, let alone trying to change them. Cars were for boys, dolls were for girls, and that’s just the way it was. Fast-forward to the present and most cars — luxury sports cars in particular — are still marketed to men.

Now, Mercedes-Benz is trying to change those associations. The company has joined forces with Matchbox to produce a new toy car specifically geared to young girls, modeled after the car driven by Ewy Rosqvist, the first-ever woman to win the Grand Prix in 1962. But can a toy car really change the way a young girl thinks? I was skeptical too, until I saw this video, which was played for us before racing school:

“Everyone told her that she couldn’t do it, but she proved that she could,” says one of the little girls after learning about Rosqvist. The message is clear: It is essential to teach our girls early on that they can choose to pursue whatever path they want in life.

When you’re used to driving cars for normals, a Mercedes-AMG GT3 might as well be a spaceship.

I grew up in New York City, where most kids never bother to learn how to drive. But my mother drilled into me that a woman should always have two things: a driver’s license and her own bank account.

I failed my road test the first time around — apparently making a left on a red is frowned upon. But I passed on my second try, just in time to buy my first car before heading off to college. She was a red ‘91 Nissan Sentra with almost 100,000 miles, and she didn’t last long. But she taught me to covet the independence that comes with being able to drive.

Here at Laguna Seca, I was poised to experience that sense of freedom in a whole new way. I was also mildly terrified, and I began to wonder what was actually in the release form I’d already signed. But I hadn’t come all this way just to watch from the sidelines.

After a crash course (ugh, sorry) in the rules of the road, we were broken up into four teams and assigned an instructor. I was on the yellow team, led by Ashley Freiburg, who at just 27 years old has the phrase “gender barrier-breaking achievements” in the first sentence of her Wikipedia entry. We hopped into a waiting line of GT3s, with Freiburg at the head of the pack.

When you’re used to driving cars for normals, a Mercedes-AMG GT3 might as well be a spaceship. But once I figured out how to adjust the seat (so I could actually see over the dash) and put it in gear, I was ready to rock. We started out slow and steady, easing into it, taking instruction from Freiburg over the radio. With each loop around the track, we gained speed and found our rhythm. It became easier to anticipate what was coming. I was too focused on the road to pay close attention to the speedometer, but I was moving fast, and I loved the rush. I was ready for more. 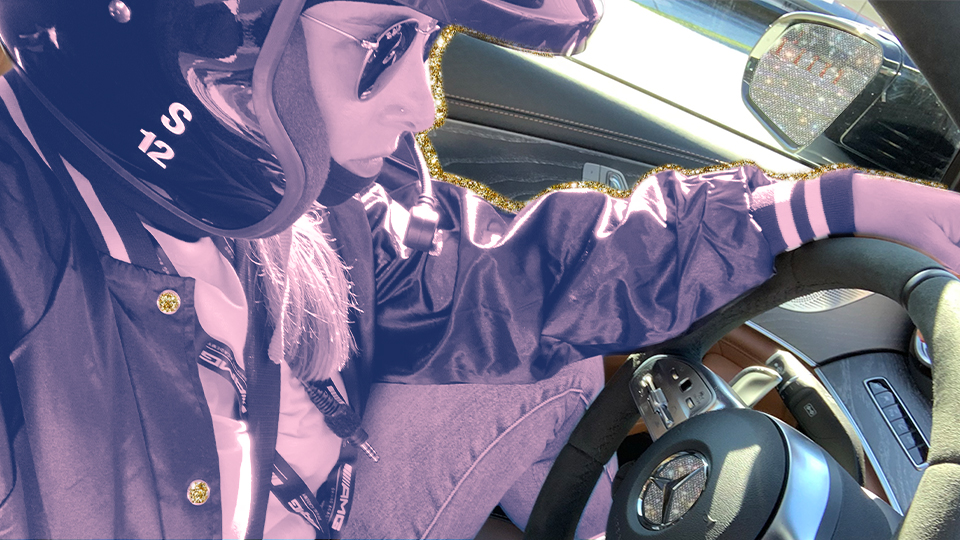 I suppose that’s how I wound up sitting in another (equally spectacular) car a few minutes later, throttling the gears, intentionally oversteering until it began to drift — as in spin out, like something straight out of a Tom Cruise movie. I did two solo runs and I tried hard to commit, but drifting just felt too unnatural to me. (I suspect that I was mostly just doing donuts, and Freiburg was too nice to tell me.)

I was still a little wobbly as we proceeded to the autocross course. For the uninitiated, here’s how autocross works: you drive as fast as you possibly can through a twisty, turny array of cones, trying not to knock any of them down, and then you slam the brakes and grind to a rapid halt.

Each driver got five practice runs and two timed runs, competing for best individual time and best team average Seconds were added to your time for every cone you toppled. I started out shaky, repeatedly cutting the wheel too late to stick the final turn (and taking out a bunch of cones in the process). But with each practice run, I gained speed, confidence and precision. I trusted my eyes to tell my hands and feet what to do, and I trusted the car to follow suit. My heart was thumping out of my chest, but it was pure adrenaline, not fear.

In the end, I clocked a personal best of 28.3 seconds — about three seconds slower than the winning time, I later learned. But our team sped away with the best overall average, and we got to go home with some pretty sweet trophies. More to the point, I’d tried something new; something way the hell outside my comfort zone. 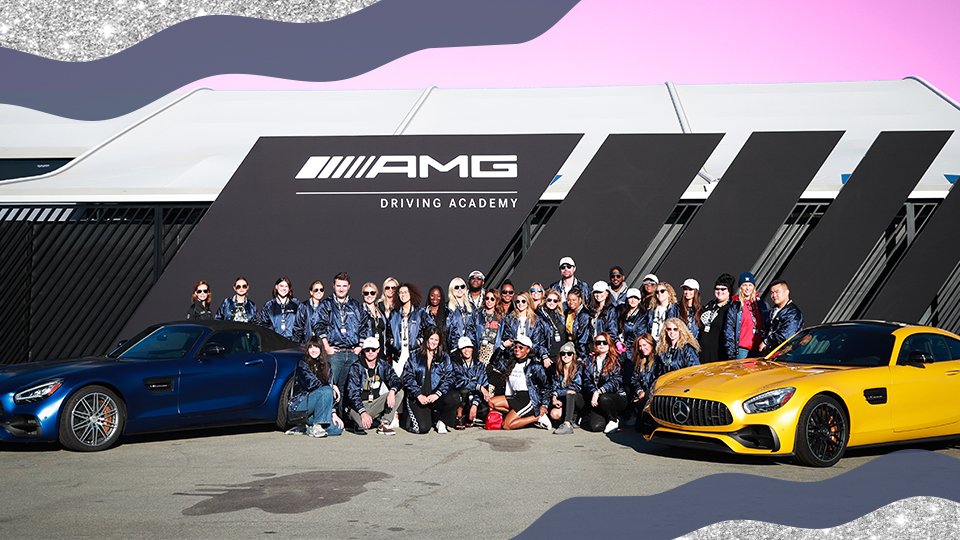 The day was coming to a close, but first we were given the chance to take a ride around the track with the pros, driving at legit race car speeds. I hopped into the passenger seat with Freiburg at the wheel, and over the next 10 seconds we climbed from 0 to ~160 MPH. My stomach dropped. I struggled not to close my eyes, like a kid on a rollercoaster. When it was over (about 90 seconds later), I nearly fell out of the car onto the track. In other words, it was awesome.

Whether you’re in the driver’s seat or you’re along for the ride, it takes guts to push yourself past the point of comfort. Whatever the fear or challenge you may be confronting, there is remarkable power in tapping into an inner strength you didn’t know you had. I suppose that was my main takeaway from racing school — well, that, and driving very, very fast in a Mercedes-Benz race car is every bit as cool as it sounds.