Shifts in menswear trends aren’t nearly as recognizable as shifts in women’s fashion—lapels widen and narrow, pant legs shorten and elongate, and when a designer does something out of the box like showing skirts, it’s probably more for branding purposes than for retail ones. This all means it’s extra-tough for those guys who may not be the biggest fashion fiends, but who do want to keep up with the latest trends.

Now that the Spring 2015 menswear collections have wrapped up, here’s our cheat sheet for the hottest upcoming fashion trends straight from runways. Whether your style icon is Keith Richards or Kanye West, you’re a suit guy or a jeans guy, and whether you love color or only wear neutrals, there definitely was something for every type of man.

And while these clothes won’t hit sales floors until next February (admittedly, the fashion calendar doesn’t make a lot of sense), considering these are spring collections, there are plenty of great ideas to try out now.  In other words, its time to toss those 10-year-old khakis and try something new, gentlemen. 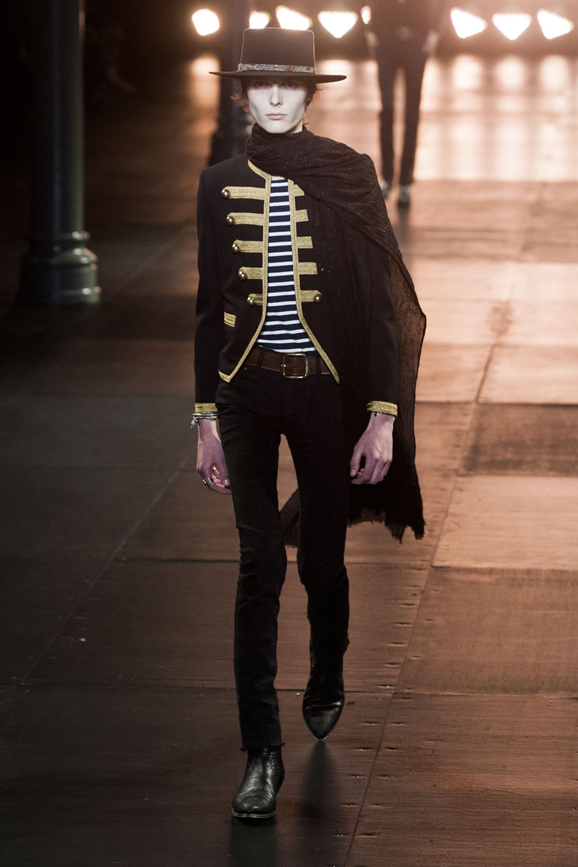 It was all about rock ‘n’ roll on the runway at Saint Laurent this season. Get the look with tight black jeans, and an even tighter blazer with a slight military influence. The look should feel just a bit a hippie, and when in doubt, ask yourself what Keith Richards would say. 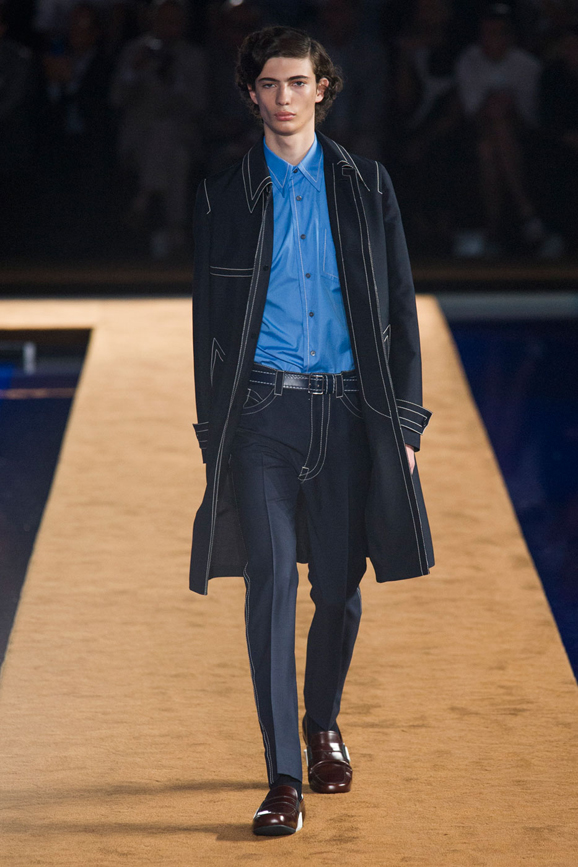 Denim on denim is a fashion faux pas turned serious fashion trend. Take it from Miuccia Prada who showed stiff denim trousers paired with denim jackets on the Spring 2015 Prada runway. Feeling not quite so adventurous? An easier way to get the look is pairing a chambray shirt with a pair of jeans. 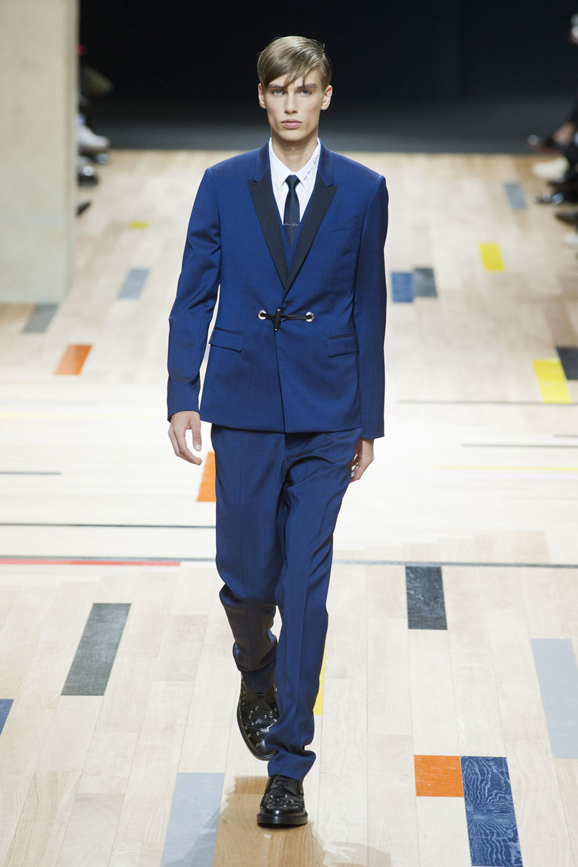 Forget black and grey suits, next spring is going to all about the blue suit, a dominant theme on the Dior Home runway. It’s an investment, to be sure, but you can get more bang for your buck by also wearing the suit as separates—three outfits out of one. 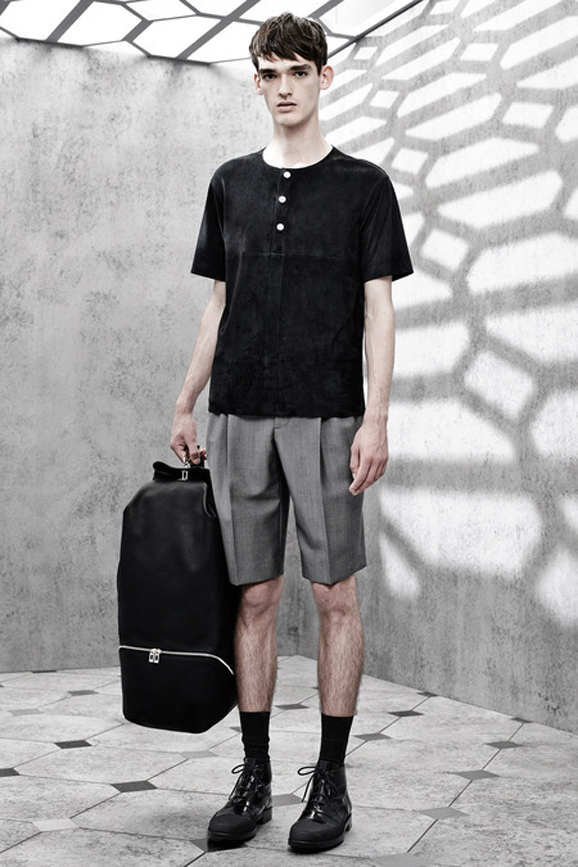 4. Dressed-up shorts are a must-have.

It’s been a huge trend in women’s fashion for some time, and its finally reached its tipping point in men’s fashion—trouser shorts. Dressy enough for the office, or an evening out, these will be a must-have come spring (and work just as well right now). 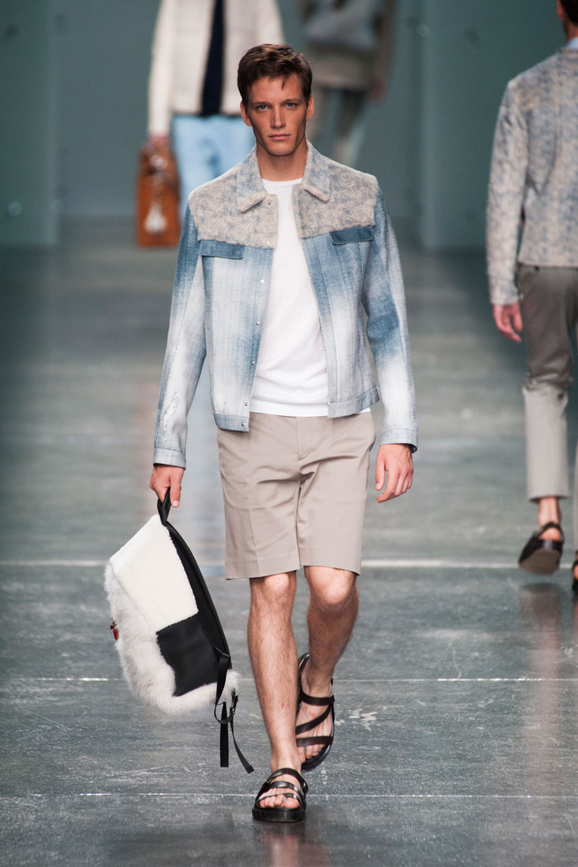 5. Forget the man bag, it’s all about the backpack.

While fashion designers have been trying for years to make the man bag happen (to varying degrees of success), next spring is all about the luxe backpack. Fendi showed versions on its Spring 2015 runway in mink (because, why not?), but you can get the look wearing a version in leather or a luxe skin like lizard. 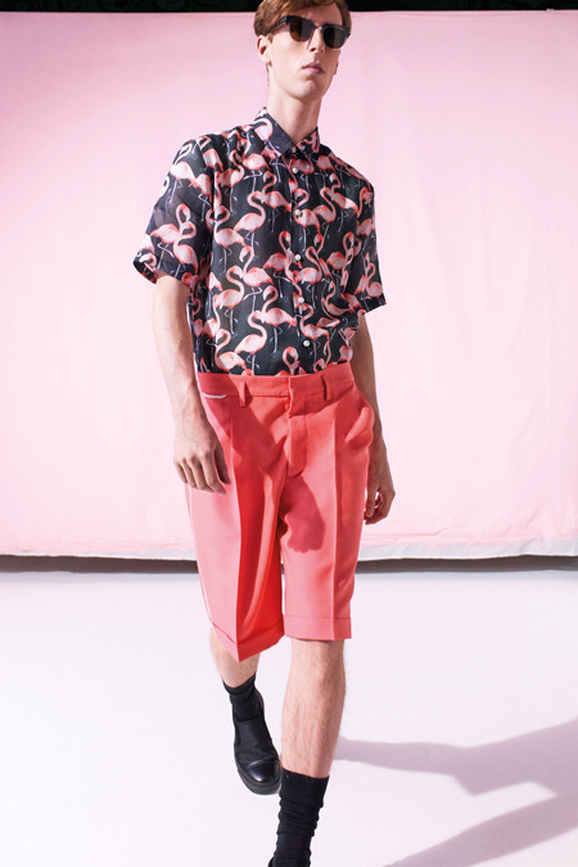 6. Have fun with whimsy prints.

While there wasn’t a ton of color on the men’s runways this season, pops of color did come into play thanks to whimsy prints, like button-downs featuring pink flamingos in Marc Jacobs’ Spring 2015 collection. The bottom line here? Just have fun with it. 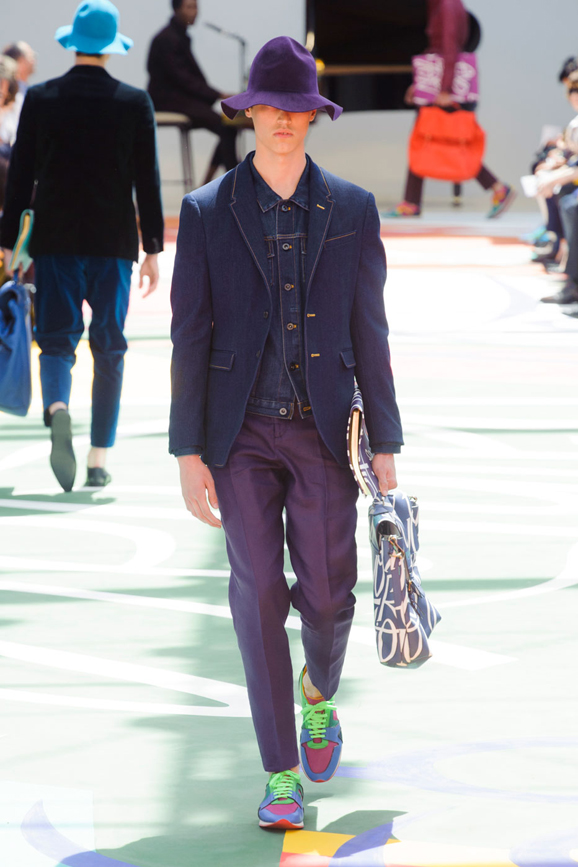 7. Experiment with layering a blazer over a denim jacket.

It’s a styling trick that Jenna Lyons has championed over at J.Crew, and the trend has now trickled up to the runway, including Burberry Prorsum’s—layer a jean jacket under a blazer. Seriously, just try it. 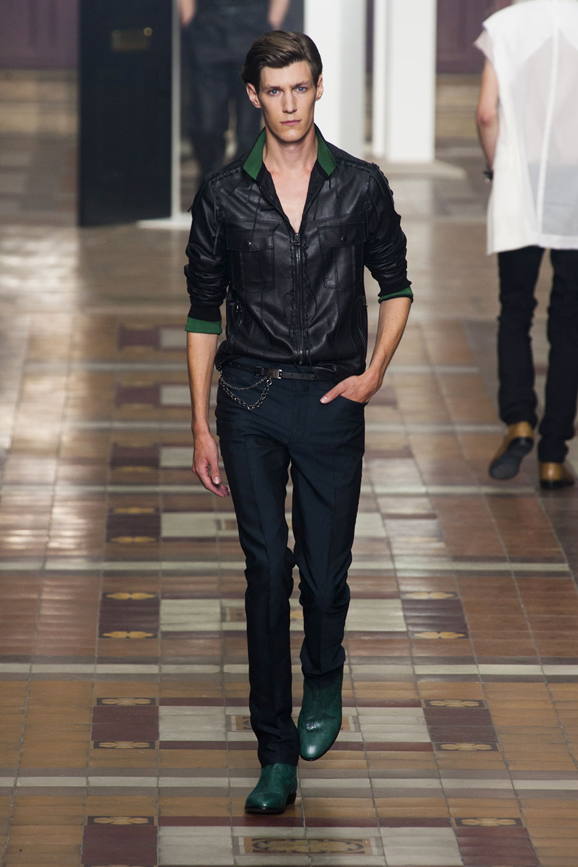 Lanvin’s menswear collection is usually best known for its suiting, but for spring, Creative Director Alber Elbaz, was thinking on the edge, the edge meaning biker jackets. Chances are, you already own one, and we suggest wearing it, a lot, come spring. 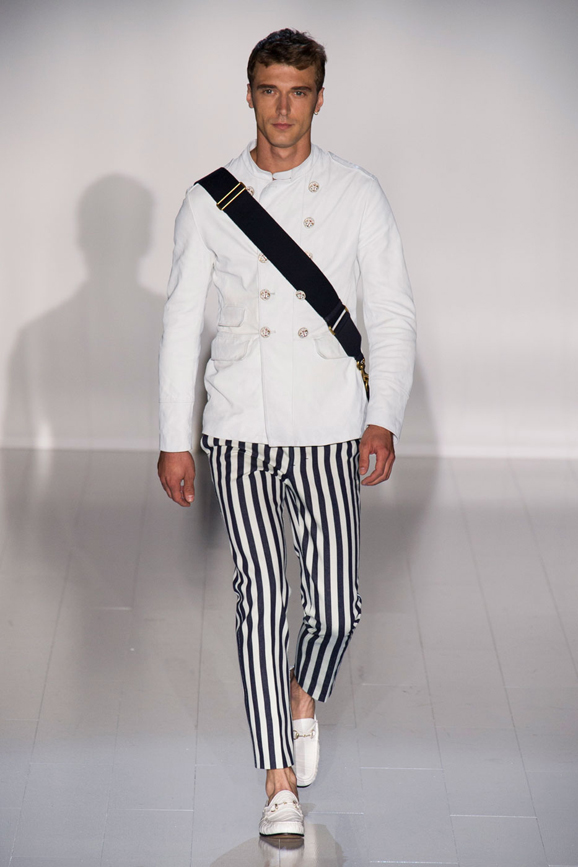 9. When in doubt, wear stripes.

From the runways at Dior Homme to Gucci, everything is coming up stripes for spring. Whether you are rocking stripe pants, a stripe suit, or layering a stripe t-shirt under a blazer, this is a trend that anyone and everyone can and should get on board with. 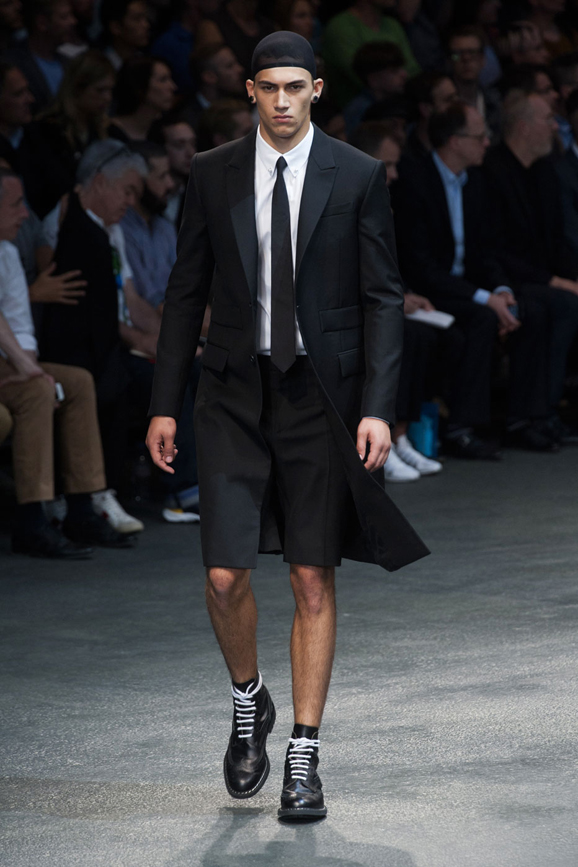 When Givenchy Creative Director Riccardo Tisci shows every look in his most recent men’s show with a pair of lug-soled lace-up boots, you know its going to be a trend, and a big one. An educated guess, but we are assuming that Tisci’s close friend Kanye West already has five pairs. 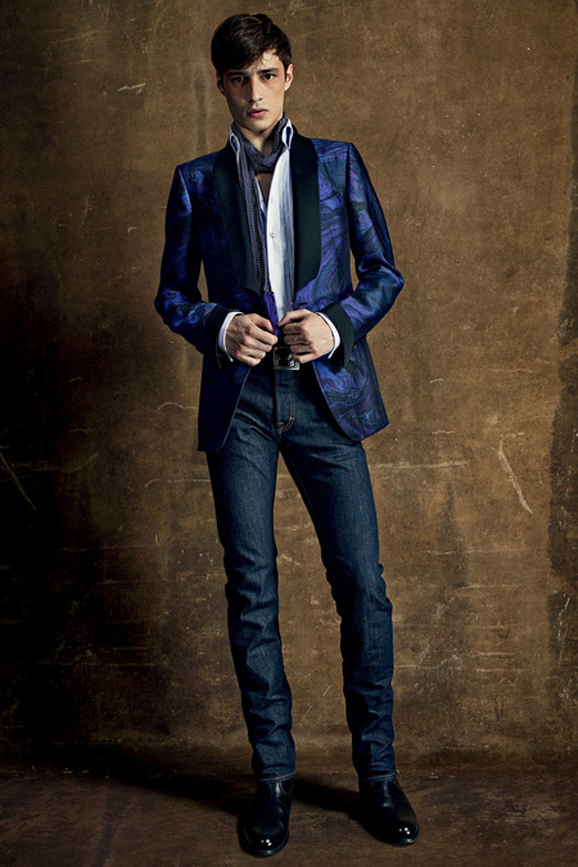 11. Dressing up jeans is back (take it from Tom Ford).

Tom Ford, the reigning king of very expensive men’s suits, is apparently over suits (at least for the time being), as evidenced by his Spring 2015 collection, which only included one. Ford debuted an extended denim collection this season (all made in the USA), and advocates wearing them for evening with an animal-print silk tux jacket. Coming from Ford, we say listen. 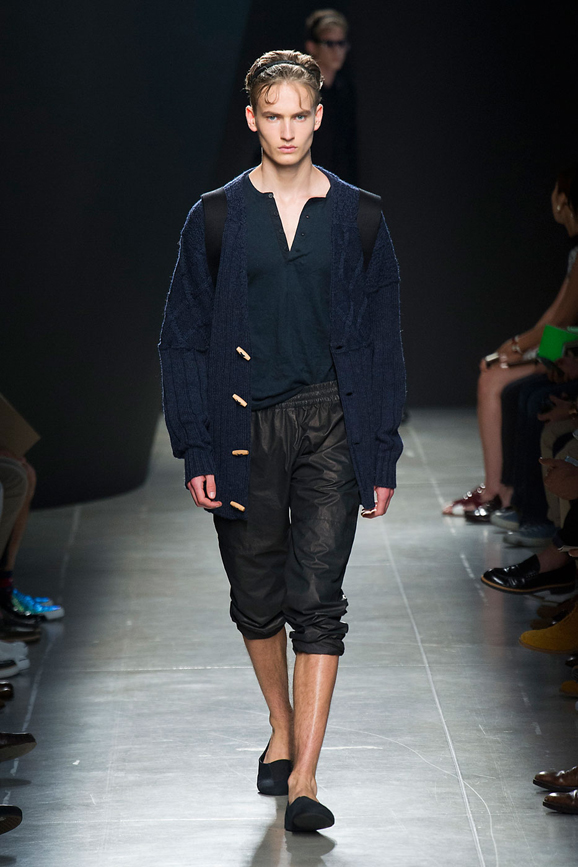 Looking for an alternative to jeans on the weekend? One of the biggest trends from the Bottega Veneta runway is rolled up track pants. This is a look you can pull off just by your shopping your closet.