We all know that Hollywood lives for reboots and sequels. These days, original films and TV shows are almost an anomaly in the entertainment industry. Therefore, when Men in Black: International was announced, a film centering Tessa Thompon’s Agent M, and Chris Hemsworth’s Agent H–we were more than a little skeptical. After all, Will Smith and Tommy Lee Jones made the franchize iconic and walking in the footsteps of Agent J and Agent K was going to be an arduous task for anyone that wanted to follow. Thankfully, both Thompson and Hemsworth were up for the task. The pair had sizzled together on screen previously in Marvel’s Thor: Ragnorak and Avengers: Endgame. But putting them in the Men in Black Universe proved that their chemistry is transcendent.

Men in Black: International exists in the same realm as the first three films and follows a young woman named Molly (Thompson). As a child in the ’90s, Molly witnessed an alien creature wiggle its way into her Brooklyn home. Though the Men in Black quickly appeared to erase her parents’ memories, no one realized that Molly was awake to see the entire encounter. Some 22-years later, hyper-obsessed with the mega-secret alien-wrangling agency– Molly cleverly weasels her way into a black suit and those stunner shades.

Impressed with her tenacity and extensive knowledge of alien life, MIB head, Agent O (Emma Thompson,) assigns Molly–now Agent M to a probationary period at the London headquarters. London is dealing with some extensive issues. Headed by High T (Liam Neeson)–the agency’s top agent, Agent H (Hemsworth), has gone a bit rouge. Following a 2016 incident in Paris where he and then-partner High T defeated the diabolical Hive, Agent H has gone on riskier and riskier missions without regard for his safety, the destruction that he leaves behind, or the rules of the organization. 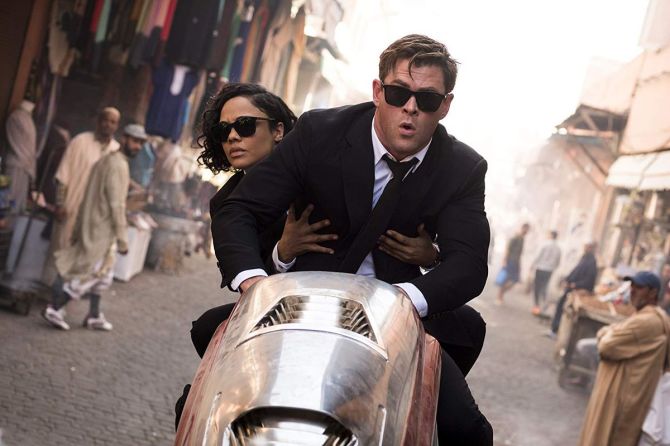 Using Agent H as an opportunity to learn the ropes of the organization, Agent M finds herself on babysitting duty when she and H are tasked with taking a royal Jababian alien named Vungus (Kayvan Novak) out for a night on the town. What’s supposed to be a night of keeping their VIP guest entertained turns into a full-blown mission when the agents learn that Vungus is in possession of a super-compressed star. It doesn’t help that some duplicitous villains (Les Twins of Beyoncé fame) who can shapeshift and turn matter into liquid are hot on their tail.

Along the way, the duo learns to work as a team and they encounter a human-like pawn piece–aptly named Pawny (voiced by Kumail Nanjiani) who after pledging himself to Agent M, turns out to be the single best aspect of the film. Men In Black: International is not a serious affair, but Pawny’s perfect humor and constant railing on Agent H make it even more entertaining than expected.

Men In Black: International isn’t perfect–it doesn’t have quite the awe and intrigue of the original franchize–after all most of MIB’s secrets are well-known by its audience. Also, the CGI isn’t always super convincing. However, the film, which is helmed by Straight Outta Compton’s F. Gary Gray, is still slick, well acted and pretty freakin’ witty. The plot invites in a younger audience that may not be as familiar with the MIB franchize. However, it also might leave some OG fans disappointed with the lack of homage paid to the films that came before it.

Still with Thompson and Hemsworth leading the charge, Men In Black: International is a lovely entry into the next sector of what will be the Men (and Women) in Black.