On Monday, Meghan Markle and Prince Harry stepped out for the first time ever in public at the 2017 Invictus Games in Toronto. And though the outing was a major moment in the couple’s notoriously private relationship (it was the first time they were photographed together since they began dating in October 2016), not everyone shared the same happy thoughts. After photos emerged, instead of complimenting the couple on their joyful smiles, some took the pictures as an invitation to shame Markle for her outfit.

At the event, the 36-year-old “Suits” actress kept it casual in ripped blue jeans from MOTHER and a white button-up with rolled-up sleeves. 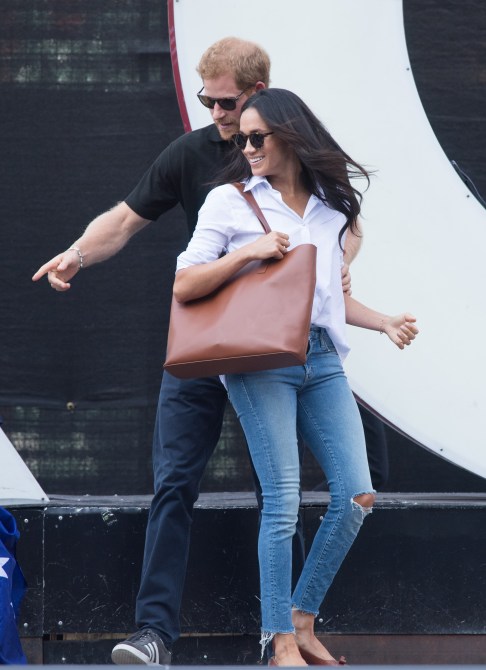 MORE: Pippa Middleton Chopped Her Hair Into a Lob

And though we think Markle looked totally appropriate for a sporting event (her beau exhibited the same level of casual in navy slacks and a black polo), some trolls slammed Markle for wearing tattered clothing on a date with a royal family member. The comments also compared Markle to Harry’s sister-in-law, Kate Middleton, who some claim has never worn ripped jeans.

MORE: How to Make Ripped Jeans in 5 Easy Steps

Markle’s look inspired U.K. television host, Lorraine, to poll her viewers if Markle should’ve dressed “smarter,” considering she’s a “would-be princess.” Though 25 percent of viewers agreed that Markle’s outfit was inappropriate for a royal-to-be, the majority thought she should wear whatever she wants—an opinion we’re on board with.

Comparing Markle’s fashion choices to Middleton’s is unfair and sexist. The women are two individuals with different minds and styles. Likewise, Harry’s outfit isn’t any more formal than Markle’s, so to single her out screams misogyny. Markle’s laid-back look worked not just because ripped jeans are on-trend, but because she looked happy, confident, and paired them with a smile. What’s not a good look is shaming someone for their choice of clothing.