The royal newlyweds, Meghan Markle and Prince Harry, made their first post-honeymoon debut over the weekend for the annual Trooping the Colour, a.k.a. the Queen’s Birthday Parade. While Prince Harry donned his usual military uniform, Markle stunned in a light-pink Carolina Herrera outfit. However, as ladylike as Markle looked, people are condemning the duchess for baring her shoulders, which breaks Royal dress protocol. Yes, seriously.

Although shoulders are not always banned for the Royal family, during this particular annual occasion, ladies are known to wear long sleeves. Both Kate Middleton and the late Princess Diana have never worn anything shorter than three-quarter sleeves for the event. 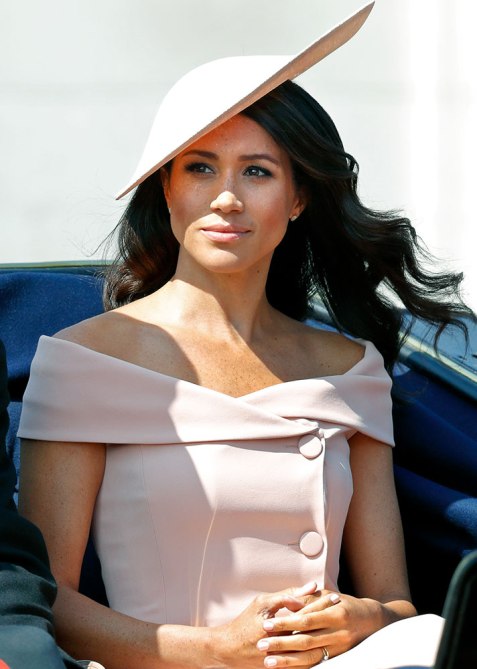 But it’s 2018, and Markle is everyone’s—er, most people’s—favorite rule-breaking-Duchess (gotta love how she wears messy buns all the time, like even to her wedding). Of course, some critics have to make their opinions known. After photos of Markle’s weekend ensemble went viral, Twitter exploded with criticism of Markle’s appearance, and we have two words: No thanks.

If classiness is really the issue, we don’t see how Markle missed the mark. Sure, there’s a place for tradition, but Markle has a whole team helping her dress, and they wouldn’t let her disgrace the entire royal family. Plus, Harper’s Bazaar reports that Markle was “nervous” for the celebration and even Prince Harry had to tell her when to curtsy, so we doubt she would intentionally cause waves with the cut of her dress.

There are bigger things to worry about than whether the Duchess of Sussex follows every single minute royal dress protocol. And at the end of the day, Markle looked incredible while still being demure. To all the haters: Get with the times.