Meghan, Duchess of Sussex has so much to celebrate. With so many blessings, it’s easy to forget that this has also been one of the hardest years for her. Meghan Markle has weathered several scandals since marrying Prince Harry. She’s about to celebrate her first wedding anniversary with Prince Harry on May 19. She’s the brand new, first-time mom to sweet baby Archie. She’s nailing her activism and philanthropy work. And she’s doing it all on her own terms. Or, as much as the rigid royal protocol will let her, that is.

However, she’s had to swallow her pride and words as her estranged family continues to soil her name in the press. She’s shouldered the brunt of the blame for an alleged rift between Prince William and Prince Harry. She had her name attached to an alleged cheating scandal by Prince William. And has had to stay mostly silent as the British press and public have pummeled her with racist and sexist messages.

When you stop and think about the incessant abuse, it’s a miracle Meghan gets out of bed and goes out in public at all. The scandals from this past year can be divided into three categories — family, tabloid or public — with each one outdoing the last in terms of hate for and bullying of the duchess. 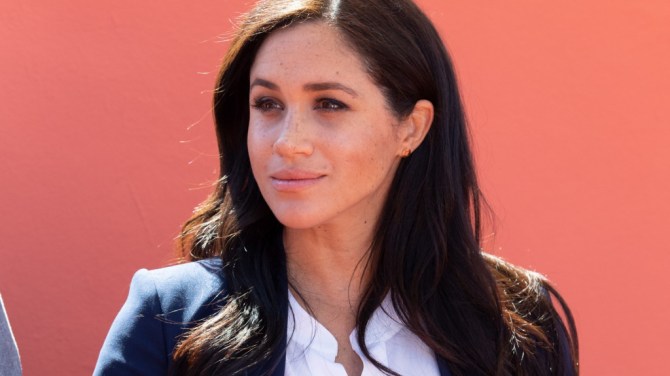 Ahead, the most shocking and ridiculous storms Meghan has had to weather in the 365 since she tied the knot to Harry.

May 2018 — That time she was accused of not curtsying to the Queen.

That wedding band was fresh on her ring finger when Meghan was accused of not curtseying for the Queen at her own wedding. Eagle-eyed fans had to scan the video of the moment to defend the new duchess. Girlfriend definitely curtseyed.

June 2018 — That time her father revealed what Harry thought of Donald Trump.

In one of his many interviews with the press, Thomas Markle revealed the details of a private phone conversation with Prince Harry. Of the details he dropped, he also mentioned that Harry said Markle should give Trump a chance. That may be nothing to you and me, but protocol dictates that royals don’t comment on heads of state.

Speaking with TMZ, Markle questioned why the Queen had not met with him yet, saying, “If the Queen is willing to meet our arrogant and insensitive president she has no excuse not to meet me. I’m nowhere near as bad.”

July 2018 — That time her sister admitted she was being paid for press.

We’ll let Samantha Markle’s words speak for herself in this one: “I worked in media most of my life and in broadcasting, so because my sister is suddenly royal isn’t grounds for me to stop doing all of that. Let’s face it — we all have to survive. Money makes the world go round, so if you want to call that cashing in, that’s fine, but I think no one in media would refuse a paycheck for talking about the royal and, as a family, we’re not subject to royal protocol. Why would I stop living because we have a family issue going on?”

Days before Meghan and Harry jetted off on their 16-day royal tour of Australia, they notified Queen Elizabeth II that they were expecting a baby. The problem, for some critics, is that they told the monarch at another royal event: Princess Eugenie’s October 12 wedding. Haters turned on Meghan for reportedly taking all the attention away from the bride.

October 2018 — That time her sister parked herself outside of Buckingham Palace.

When interviews across the Atlantic just wouldn’t do it, Samantha Markle made the trip across the pond and showed up at Buckingham Palace in the hopes of “reconnecting” with Meghan. Funny, since Meghan and Harry actually lived a few miles down the road at Kensington Palace. To make sure everyone knew she was in town, Markle went on Channel 5 Monday, where she was grilled about her motives.

“I’ve always wanted to see London, but really I wanted to make the trip and sort of speak the wishes and thoughts and sentiments of my father, and hopefully get a message to my sister,” Markle said. “Things aren’t really what they seem. There’s so much misperception. Hopefully, we could clear up the record and move forward with peaceful resolve.” 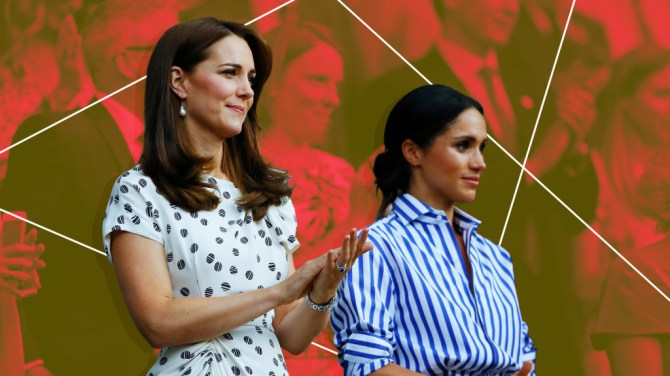 November 2018 — That time she “feuded” with Kate Middleton.

When news of Harry and Meghan’s move out of Kensington Palace to strike out on their own first broke in November of 2018, the public and the press came to a unanimous conclusion as to why that would be: Meghan. Everyone pointed the fingers at the new royal, suggesting her alleged “Difficult Duchess” attitude was not just reserved for the staff, and had caused a feud between her and Kate. Obviously, all that turned out to be untrue. The Sussexes were expecting a baby and wanted more space than the two-bedroom apartment they lived in at Kensington Palace.

As rumors of tension between the Cambridges and Sussexes grew, so did a rumor that Prince William never approved of Harry’s choice for a bride, causing tension and a falling out between the otherwise close-knit brothers. This rumor had a life of its own and had many iterations for the reasons and causes during the holiday season and into 2019.

January 2019 — All those times she was grilled for cradling her pregnant belly.

Can we all agree that sometimes the internet is just a hot dumpster fire? Okay, now that that’s out of the way — people spent months criticizing Meghan for how, how often and when she touched her pregnant belly. We’re not going to expand further on this because it’s truly vile and unwarranted criticism that unfortunately, came from women as much as it did from men.

When yet another one of Meghan and Harry’s aides decided to part ways with couple, the news media spun the news as: the Difficult Duchess strikes again!

April 2019 — That time truthers said she was faking her pregnancy.

As so often happens with famous women, fans and trolls alike feel treat a celebrity’s body as if it’s their own. So when Meghan’s pregnancy began to be more noticeable, a conspiracy theory that she was using a prothetic belly gained traction online. Truthers used hashtags like #Moonbump and #Megxit as a bat signal of sorts to spread the completely unfounded theory that Meghan and Harry were using a surrogate and hiding the whole thing from the public.

April 2019 — That time royal reporters and British tabloids turned on Meghan and Harry.

When @SussexRoyal, the couple’s official instagram account, announced they were eschewing tradition for a more private royal birth, the British press straight up turned on them, demanding the right to see their newborn. The Sun published a letter criticizing the expectant parents: “The public has a right to know about the lives of those largely funded by their taxes. You can accept that or be private citizens. Not both.”