Admit it: You freaking love Meghan Markle and Prince Harry. I love Markle and Harry. Everyone and their mother loves Markle and Harry. Why? Because these two are arguably one of the sweetest and most stable couples in the public eye. It’s been such a joy to watch love blossom between them over the last year or so, and admittedly, we can’t wait for good news about them. We’re ready for that royal wedding magic.

The two look so comfortable with one another, so at ease. They’re always smiling, or holding hands, or they have their arms wrapped around each other. It’s easy to see that they’re deep in the throes of a good relationship, and we can only hope that things continue on this road.

But make no mistake: These two have come a long way in the development of their relationship in a fairly short time. Thinking back to the way things were in the earliest months of 2017, it’s kind of crazy to see just how far they’ve come. So, where did Markle and Harry begin as a couple in 2017, and where are they now?

In February, Markle and Harry were officially spotted together for the first time while out on a date night in London. Their first paparazzi shot together helped confirm that the lovebirds were in fact dating. They were snapped while crossing the street in London, Harry leading the way and holding Markle’s hand, as they left the exclusive Soho House.

In March, Harry brought Markle to Jamaica, where she was his date to a friend’s destination wedding. Sneak paparazzi photos showed to the two at what appeared to be the reception in their best beachwear, with Markle wrapping her arms around Harry’s shoulders at one point.

April saw Markle shut down The Tig, her successful lifestyle blog and a creative outlet for her. The conversation soon turned to what this move meant for her relationship with Harry in regards to moving out of the public eye as a blogger and actor and potentially into a more humanitarian or stately role, as was the case with the Duchess of Cambridge.

While Markle’s official statement didn’t indicate anything about how serious she was regarding a possible future as a royal, many believed this was her first step towards royal status: “After close to three beautiful years on this adventure with you, it’s time to say goodbye to The Tig. What began as a passion project (my little engine that could) evolved into an amazing community of inspiration, support, fun, and frivolity. You’ve made my days brighter and filled this experience with so much joy.”

In May, the two were caught on camera having a secret kiss while at one of Harry’s polo matches. So cheeky—and sneaky! Even better, while we never saw the photos, we do know that Markle was Harry’s date to Pippa Middleton‘s wedding. Markle didn’t attend the ceremony (a common English custom for weddings of this nature and not at all a rude move), but word on the street was that she did attend the private reception. Rumors also began surfacing that Harry secured permission from his grandmother, Queen Elizabeth II, to propose to Markle.

August saw the couple jaunt to Africa for a luxurious vacation together. Engagement rumors hit new levels during this time (and haven’t subsided since then) as many felt this kind of grand vacation would be the perfect time for Harry to pop the question. While it didn’t happen, public interest in the progression of the couple’s relationship only increased from there.

September was a big month for Markle and Harry. Early in the month, Markle landed on the October cover of Vanity Fair. In her cover issue profile, she took a moment to declare her feelings for her royal boo: “We’re a couple. We’re in love. I’m sure there will be a time when we have to come forward and present ourselves and have stories to tell, but I hope what people will understand is that this is our time. This is for us. It’s part of what makes it so special, that it’s just ours. But we’re happy. Personally, I love a great love story.” 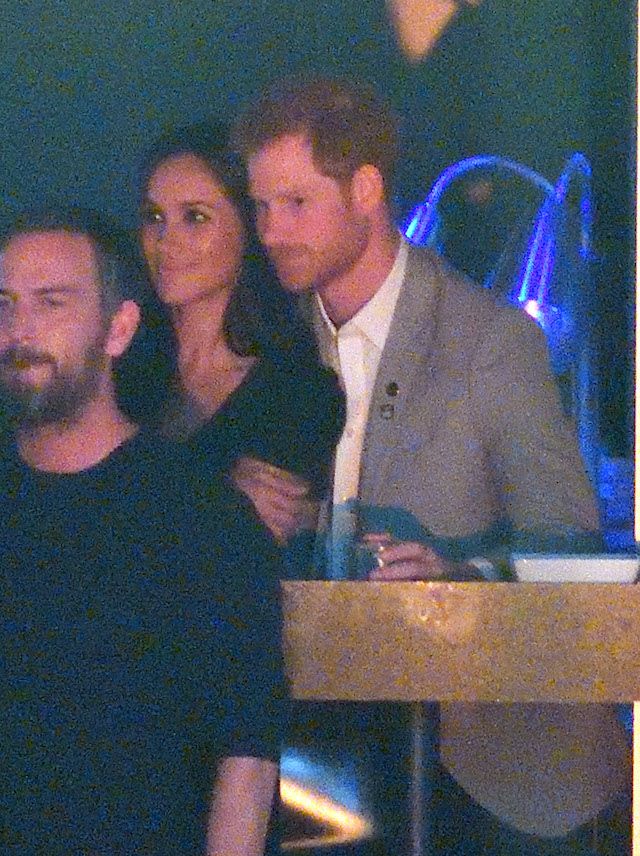 At the end of the month, the pair were spotted at the Invictus Games in Toronto, Markle’s home away from home while she filmed Suits. Harry was there as an official part of the games themselves, but Markle was spotted with Harry at various sporting events and at the closing ceremonies in support of her sweetheart.

In October, news broke that Markle was very possibly leaving Suits as she and Harry made plans to move in together in London. The news sparked even more serious engagement rumors.